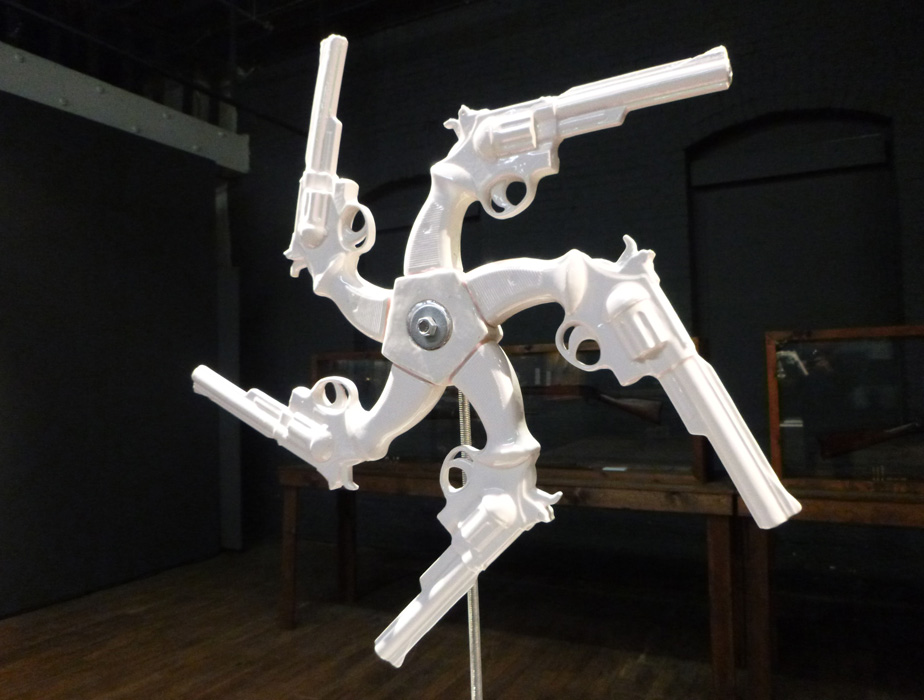 Call it a bang-up job. Belger Arts Center’s current exhibition “American Narrative: Trigger Zone” goes full-on Top Gun — right into the danger zone. Which one exactly? No less than the fraught territory of contemporary America, a post-war culture of near permanent war, with its paradoxical passion for firearms as the safeguard of civil liberties and scapegoat for tragic social problems. Whatever your position on guns as industrial design objects and subjects of artwork may be, this exhibition proves there are larger entanglements to consider, feel, appreciate and discern.

Curated from The Belger Collection, one of Kansas City’s most unheralded and prescient art collections, the exhibit features works by powerhouse American artists and also yields interesting insights into the mind and taste of the collector, Dick Belger. We encounter his pressed Vietnam-era U.S. Army service jacket at the entry of the exhibition. A patch reads “Our Country Not Ourselves” hinting at a thread of American idealism in an otherwise stunning crazy quilt of an exhibition.

Jesse Small further exploits the form and materiality of arms in a trio of intricate metal sculptures: the squashed torpedo “Dud,” the decorative bayonet-meets-wedding cake “Forever Hold Your Peace” and his towering “Bramble,” that points to the long game of Mother Nature ultimately reclaiming every last firearm.

Renée Stout’s “Arsenal for The Fire Next Time” is a set of wood reproduction of  guns owned by historical figures who took up arms against the abuses of state power: Harriet Tubman, Geronimo, Che Guevara, Winnie Mandela, Black Panther Bobby Hutton and John Brown. Even more disturbing is Stout’s “Baby’s First Gun.” The miniature pistol, packaged in creepy cuteness, makes a searing statement on the early normalization of gun play. An ominous fortune cookie embedded in the work reads: “Society prepares the crime. The criminal commits it.”

Paul Anthony Smith’s gut-wrenching, life-size diorama “Angelic Warrior” depicts the lethality of the American soldier in the 21st-century theater of asymmetric warfare, in which civilians may be innocent casualties or enemy combatants.

Of the powerfully expressionist paintings of William Christenberry, none are more striking than the Alabama native’s “Klavern 93,” a massive oil painting from 1964 addressing the terrors of the KKK. Threatening white-hooded figures loom in segregated pictorial spaces against a lurid yellow background. The artist revisited the subject throughout his career, as seen in his literal “Hologram” of a doll figure in hooded Klan garb produced in collaboration with MIT in the 1990s.

Several other works address environmental catastrophes of the last 50 years. William T. Wiley’s hallucinatory works on canvas and paper take on the nuclear nightmares of Three Mile Island and Chernobyl. Robert Rauschenberg’s widely reproduced 1970 print “Earth Day” was an urgent call to action that still resonates as pollution, habitat destruction and overconsumption plague us to this day.

Not all is gloom and doom, however, in “American Narrative: Trigger Zone.” Terry Allen’s multi-media installations “Shiprock” and “Sunset Crater” from the early 1990s allow for some breathing room. Both works evoke visceral aspects of the desert landscape. A cassette tape- powered soundtrack of howling winds and wildlife accompanies each timeless landmark perpetually painted by the sun. Here we are humbled by the long arc of geological time and the ephemeral presence of our species. It provides a safe zone, a space to recover from the traumas of civilization, an opening for healing.

The rustic, cavernous galleries of the Belger Art Center contain many more sculptural surprises and compelling works on paper. Need an antidote to holiday artificialness? Or can you even handle the truth? If so, visitors will be rewarded with a profound story of America told through nearly 50 years of fearless art collecting.