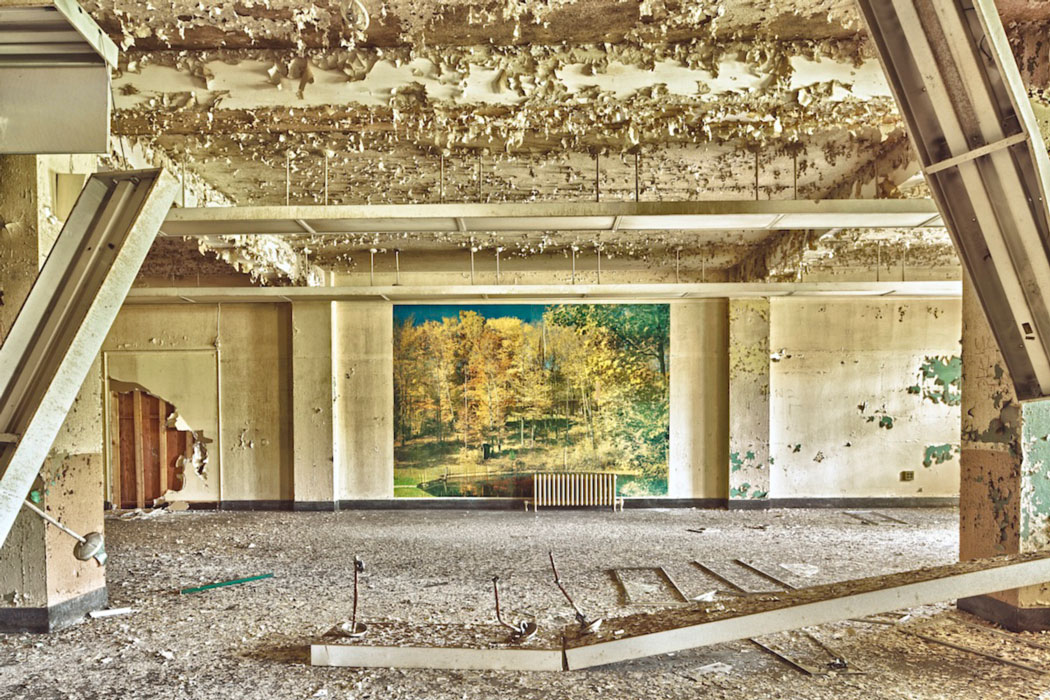 “The photographs do not…critique social power structures or government; rather they illustrate a different power: that of the natural world and its cycles of decay and reclamation.”

Photographer Avery Danziger, former Columbia, Missouri resident, had a craving for barbeque that led him on an unexpected and weird trip.  Intrigued by a deserted hospital in rural New York, after securing his bbq, he eventually got permission to photograph the cavernous and deteriorating interiors, resulting in the Harlem Valley/Wingdale Project.

Roaming the interior of these buildings in a HAZMAT suit and respirator, accompanied by a New York state handler, Danziger photographed the creepy interiors of this monument to decomposition.

Compositional devices such as saturated color, flattened picture planes, and luminous lighting keep the images from consideration as documentary agents of reform.

The photographs do not comment on psychiatric practices, the history of the insane, or early health practices, nor are they commentary on local economic woes, joblessness, or a downward economy.  They do not critique social power structures, or government; rather they illustrate a different power: that of the natural world and its cycles of decay and reclamation.

Some of the images are so beautifully colored that they resemble marzipan confections. Sunlit rooms with their frosting-like peeling paint and peachy light feel beautifully airy. Closer inspection reveals the degradation of every surface.  Peeling paint stipples the ceilings, floors and walls of these rooms, while large sections of electric light panels lay tumbled on the floor.

Other images from the hospital’s power plant, such as Wingdale #7134 show the pipes and machinery that kept the buildings running.  And yet even some of those, such as #7146 are suffused with sunny yellows, blues and oranges, stylizing these massive machines almost as decorative objects.

His technique also emphasizes the alien nature of discarded and deteriorating buildings, absent of any human presence.

Wingdale #8987 perhaps most eloquently suggests a former human presence because the room looks so ordinary—sink, cabinets, mirror. Except there is no mirror, we are disconcertingly looking through that rectangular “mirror” space into another space.  According to gallerist Sherry Leedy, there was once a two-way mirror there, installed for patient observation.  It is an uncanny reminder of the former occupants and their activities.

Because in the majority of images there is nothing left to identify a psychiatric hospital, what, then, do the photographs represent?  These buildings could have been most anything.  Instead, Danziger suggests the way in which, left unattended, human-made structures erode, and succumb to the effects of neglect, humidity, water, bacteria, chemicals, and the irrepressible force of the natural world against the machinery of architecture.

But really, we already knew this about the world, so what do these photographs become in their fierce beauty?  With their churchlike windows streaming beams of beatific light illuminating the corrosion, Danziger seems to suggest that we see these ugly, toxic buildings as something else.  Because in spite of the artist’s HAZMAT suit, the bacteria, poisonous water, and dangerous molds, all of which enhance the story behind the images, he sought to make beautiful, artful images that will always co-exist at odds with the problem of this building and its poisonous degradation.

Danziger’s images commemorate the visual language of decay, what it feels like, how it progresses, yet, still, they are artfully re-imaged, and made, in some cases, quite glorious.  It’s a strange pictorial and picturesque trip.