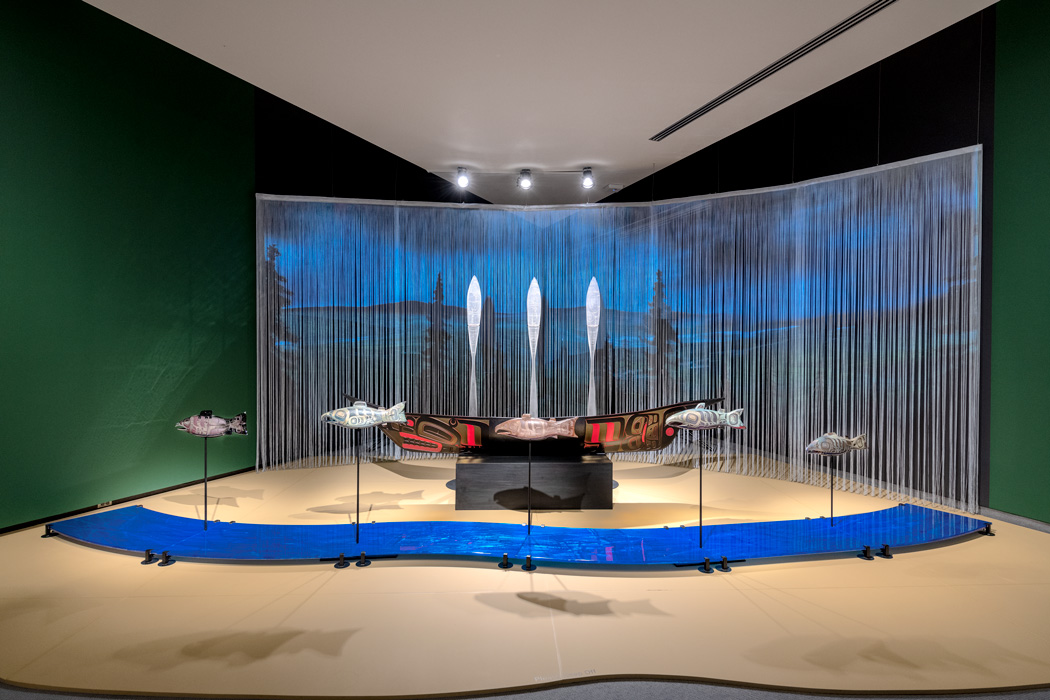 “Preston Singletary: Raven and the Box of Daylight” at the Wichita Art Museum

“Please try to pay attention,” said the voice of the elder before switching back to his native Tlingit tongue. His voice gives way to a female elder continuing a story punctuated by easy laughter. Just beneath their tale, the quickening patter of Pacific Northwest Coast rain saturated the soundscape of Preston Singletary’s multifaceted exhibition, “Raven and the Box of Daylight,” at the Wichita Art Museum.

The artist’s name may ring a bell for “KC Studio” readers: One of Singletary’s memorable blown glass and sand carved sculptures, “Raven Steals the Moon,” can be seen in the Nerman Museum of Contemporary Art’s permanent collection on the campus of Johnson County Community College.

The Raven, instantly recognizable by its shrill “KAW, KAW” call, is central to the spiritual cosmology of the Tlingit people, indigenous to southern Alaska and the colonized regions of British Columbia and Yukon Territory. In this latest traveling exhibition, Singletary expands his masterful glass art in collaboration with Seattle-based creative team zoe | juniper to present a dazzling immersive experience of the Tlingit creation story.

Singletary sets the stage with a luminous three-foot totem, which gives the exhibit its name. The vertical composition, read from bottom to top, establishes the relationships and themes of the mythological narrative elaborated in the show: The Box of
Daylight anchors male and female ancestor figures with a stylized raven clutching a smiling sun at its apex. The sleek carving of cast lead crystal and kiln cast glass emanates its status as a sacred object
of the highest order.

Perched nearby, above conventional eye height, is a milky white Raven sculpture in blown and sand carved glass. It is the legendary spirit Raven emitting light in a primeval world of darkness, destined to become the familiar black raven, the cleverest of birds in our now sunlit world.

Inviting video projections of towering Pacific evergreens with cascading glints of starlight draw the visitor into the first of four scenic environments in the exhibition. Claps of thunder and rhythmic, ambient music contribute to a multisensory experience.

Extensive wall labels translating the unique local variations of the Tlingit Raven narrative interrupt the experience. Paradoxically, the didactic components are necessary to fully comprehend the supernatural story elements in which Raven or “Yéil” shapeshifts in order to be born as a human and carry out his mission to release the sun, moon and stars to the world.

“Nass Héeni (Nass River),” the second major environment in the exhibition and an important geographical site of the Raven story, arcs deep into the gallery space, with its cobalt blue waterway as a boundary. Several intricately carved glass salmon appear to float above the river while casting shadows beneath a human sized “Kéet Yaakw (Killer Whale Canoe)” with black and red decorated prows. Three semi-translucent carved glass canoe paddles stand upright in the canoe, catching light from the video projection of a forested mountain landscape on the curtain backdrop. It is an impressive theatrical installation, and the dramatic lighting enhances the delicate features and varied glassmaking techniques.

Close by, the comparatively modest installation, “Humble Birth,” shows Singletary at his most effective in illustrated narrative. A simplified pregnant female form, along the lines of Venus of Willendorf, reveals a detailed formline relief carving of the transformed Raven Baby within her womb. She is a noble daughter burdened with Immaculate Conception. Her wealthy father is the keeper of the eponymous Box of Daylight.

Mounted on a slender steel post, her earthy form stands in a shallow pale green bowl with dense tree branch designs in relief. Several feet beneath the bowl, a shallow pit lined with simulated moss and beard lichen spills onto the floor, indicating the humble landing spot for the Raven Baby, who is destined for cosmic mischief.

Pushing the Boundaries of Glass

In the monumental third environment, “Naa Kahídi (Clan House),” we see Singletary push the boundaries of what glass can do as a sculptural medium. At the center of the installation is an extraordinary symmetrical formline crest rendered in thick black lines on a pale yellow glass ground. Assembled in eight large panels, the portal-like crest levitates off the wall and floor. The Raven’s penetrating eyes and beak stare straight into our souls from the keystone of the arch, daring us to enter. It is flanked by two semi-translucent carved glass doors suggesting the interplay of sun and moon.

A passageway to the last large environment features blown, carved and sculpted glass objects recreated from Tlingit material culture ranging from baskets to rattles to oystercatchers. It leads to the primordial red-orange glow within the lustrous glass “Box of Daylight.”

The last act of Singletary’s tour de force of glass making is an evocative gallery of carved glass busts. Mounted on pedestals, each bust displays specific design attributes in regalia indicating its identity. Among them are Wolf Woman, Frog Man, Shark Woman, even a “strong and stubborn” human, who scatter across the land, water and sky as the daylight is released by the trickster Raven. As we wander between these figures, a curtain of video contextualizes the primeval scene with lapping coastal waters and emergent human bodies in smoky silhouettes.

At the end of this tale we learn how Raven transformed from white to black in bringing light to the world. It’s a tricky move, to be sure. In the same way, translating oral traditions and indigenous visual culture into a 21st-century whiz-bang museum experience makes one wonder what is lost and what is gained.

“Preston Singletary: Raven and the Box of Daylight” continues at the Wichita Art Museum, 1400 West Museum Blvd., Wichita, through Aug. 30. The museum closed in response to the COVID-19 threat but plans to reopen June 2. For more information, 316-268-4921 or www.wichitaartmuseum.org