January is almost over and it’s time once again for weekend calendar picks from KC Studio editor Alice Thorson. See Unicorn Theatre’s production of Project Dawn now through February 18th. Opening today, the Kemper Museum presents a retrospective of works by Cuban printmaking Belkis Ayón. Tomorrow night, Kansas City Repertory Theatre opens its production of The Curious Incident of the Dog in the Night-Time and Spinning Tree Theatre premieres its production of Full Gallop, a play about fashion icon Diana Vreeland. At the Folly, The Friends of Chamber Music present a night of Schubert performed by pianist Llŷr Williams. Stop by H&R Block Artspace Friday night for the opening reception of an exhibition of work by Dannielle Tegeder, on view through May 17. And Sunday night, enjoy the contemporary chamber opera As One, presented by Lyric Opera Kansas City (featured in our Jan/Feb issue). For more ideas this weekend, visit Kansas City’s most comprehensive arts calendar at kcstudio.org/events.

Philadelphia is home to a revolutionary court designed by a passionate and shockingly funny group of women. Every day these lawyers, judges, parole officers, and staff work to transform the lives of women repeatedly convicted for prostitution. In this daring and vital new play in which seven actresses portray multiple participants and members of the court, Karen Hartman probes the thin lines between freedom and slavery, activism and obsession for women on both sides of the law, inside the real life Project Dawn Court in Philadelphia, PA. 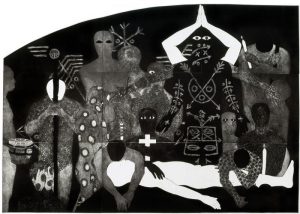 Kemper Museum is pleased to present Nkame: A Retrospective of Cuban Printmaker Belkis Ayón (1967–1999). This landmark retrospective is the first in the United States dedicated to the work of Belkis Ayón—the late Cuban visual artist who mined the founding myth of the Afro-Cuban fraternal society, Abakuá, to create an independent and powerful visual iconography.

Ayón’s signature technique was collography, a printing process in which materials of various textures and absorbencies are collaged onto a cardboard matrix and then run through the press with paper. Her narrative works, many of which were produced at very large scale by joining multiple printed sheets, are imbued with an air of mystery, in part due to her deliberately austere palette of shades and subtle tones of black, white, and gray. For a black Cuban woman, both her ascendency in the contemporary printmaking world and her investigation of a powerful all-male brotherhood were notable and bold. Nkame, a sweeping overview of her most fertile period of artistic creativity, covers Ayón’s graphic production from 1986 until her untimely passing in 1999.

The Curious Incident of the Dog in the Night-Time

Winner of the 2015 Tony Award for Best Play, Curious Incident tells the story of 15-year-old Christopher, a boy with an extraordinary brain who is exceptionally intelligent but ill-equipped for dealing with everyday life. When Christopher falls under suspicion for killing the neighbor’s dog, he sets out on a journey to find the real culprit that will change his life forever. 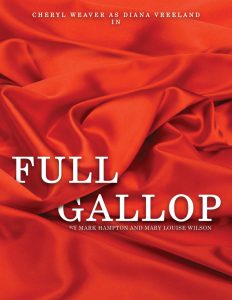 Diana Vreeland stood at the center of American style for five decades! As editor of Harper’s Bazaar and Vogue magazines, and as a member of the International Cafe Society, she chronicled the extraordinary people and events of her time.

FULL GALLOP is a portrait of this remarkable woman at a turning point in her life. Vreeland has just returned home to New York after four months in Europe – a trip she took after being fired from Vogue magazine. She throws an impromptu dinner party in the hope that a wealthy friend who is invited will bankroll her in starting a magazine of her own. Other friends, however, attempt to persuade her to take a job at the famed Metropolitan Museum of Art.

In her distinctive style, once she decides in which direction her life will move, she goes at it “full gallop.” 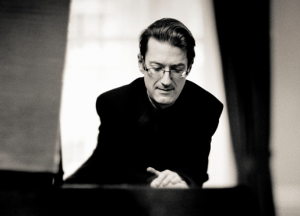 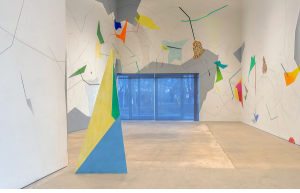 The H&R Block Artspace is pleased to present Chroma Machine Suite: Forecasting Fault Lines in the Cosmos, an exhibition of work by Dannielle Tegeder, including two new commissions created with 14 students at the Kansas City Art Institute during the artist’s residency at the Artspace.

In an ongoing exploration of invisible systems, the artist reveals her deep engagement with ideas of architecture, urban planning, painting and collaboration in a dynamic environment that merges drawing, sculpture, animation, sound and performance. This immersive and evolving sculptural installation will be re-activated through a series of performative iterations in collaboration with Jane Gotch, a Kansas City-based choreographer and dancer, who will be joined by dancer Karen Lisondra. 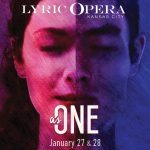 In this chamber opera for two singers and string quartet, by composer Laura Kaminsky and co-librettists Mark Campbell and filmmaker Kimberly Reed, a mezzo-soprano and a baritone depict the experiences of its sole transgender protagonist, Hannah, as she endeavors to resolve the discord between her self and the outside world. The New York Observer says “As One is everything we hope for in a contemporary opera: topical, poignant, daring, and beautifully written.”