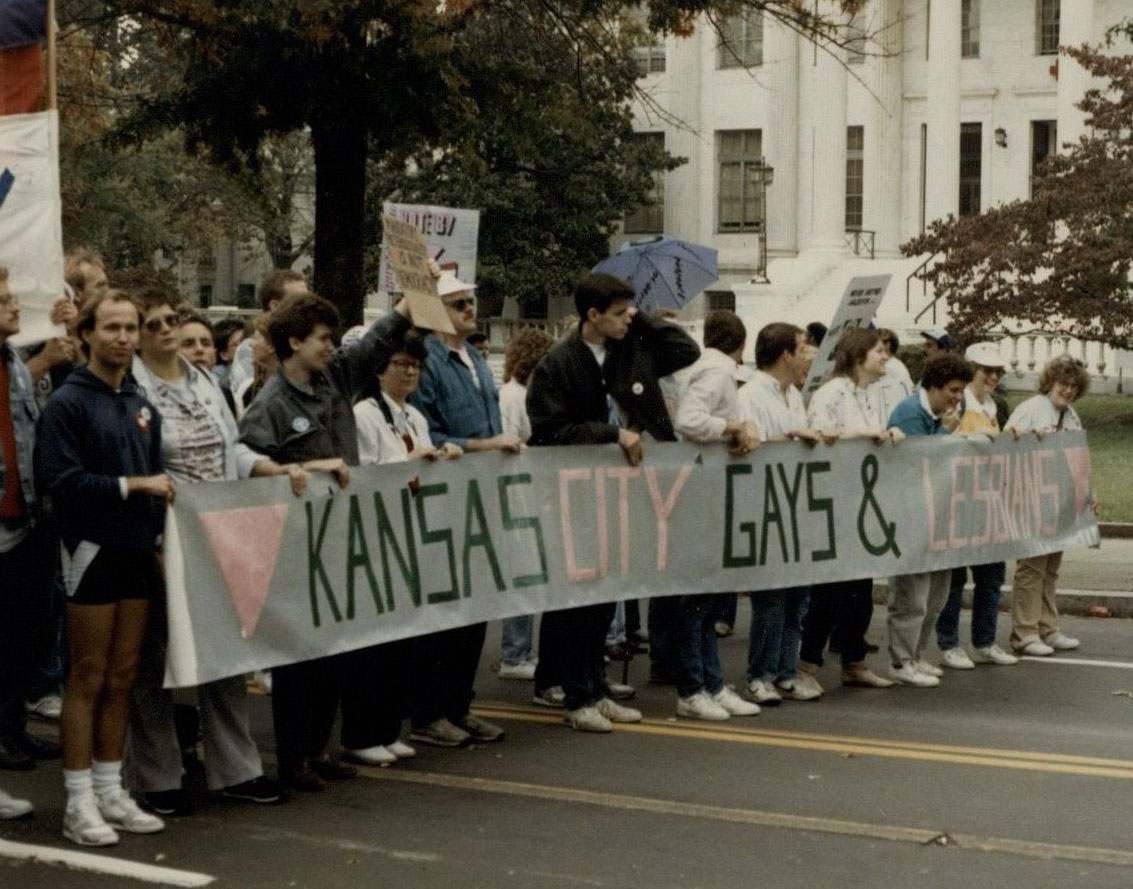 Kansas City contingent in the Second National March on Washington for Lesbian and Gay Rights, Oct. 11, 1987 (Gay and Lesbian Archive of Mid-America (GLAMA) at UMKC)

For 10 years, the Gay and Lesbian Archive of Mid-America (GLAMA) at the University of Missouri Kansas City has been an invaluable repository for historical, social, cultural and political material involving the region’s LGBTQ community. On Oct. 10, 2019, GLAMA commemorated its first 10 years with a special exhibit, “GLAMA at 10: A Decade of Discovery.”

As both a research and a community outreach collection, GLAMA’s holdings include 300 linear feet of photographs, albums, audio recordings, magazines, fliers and three-dimensional artifacts, and everything featured in the exhibit is drawn from the permanent collection. According to Stuart Hinds, curator of Special Collections and Archives, “what we have done with this project is collect for a KC community that used to be largely invisible (until) starting around the 1960s.”

In addition to showcasing items from GLAMA’s collection, the exhibit also highlights ways in which students have used the archive in their own projects.

Austin Williams, a Ph.D. student, made extensive use of the holdings to create a feature-length documentary film titled “The Ordinance Project.” The film focuses on the effort to pass Kansas City’s 1993 ordinance that protected gay, lesbian, bisexual and HIV-positive people from discrimination in housing, employment and public accommodations. At a time when homosexuality still carried significant political and social stigma and AIDS was typically a fatal illness, the ordinance was a progressive, albeit controversial measure. “The Ordinance Project” debuted at the 2018 Kansas City LGBT Film Festival and won the Celebration of Courage Award for Best Feature-Length Documentary.

With these achievements and the opening of the new exhibit, public awareness of GLAMA is growing. Hinds notes, “the sheer word of mouth has been successful” but that many people still don’t know about the archive and its work. One of his goals for the next 10 years is to develop a community advisory group to help take the collection forward and reach more people. One of GLAMA’s biggest challenges has been “tapping into communities of color,” said Hinds, and such an advisory group would be a way to help overcome this.

Despite the progress that the LGBTQ community has made toward gaining social and legal equality, the exhibit serves as a reminder that these gains were the result of many years of activism and tenacity. Hinds cautions that “the need for this documentation and the need to tell this history doesn’t go away. It is critical that students and members of the community hear these stories as the ugliness reappears.”