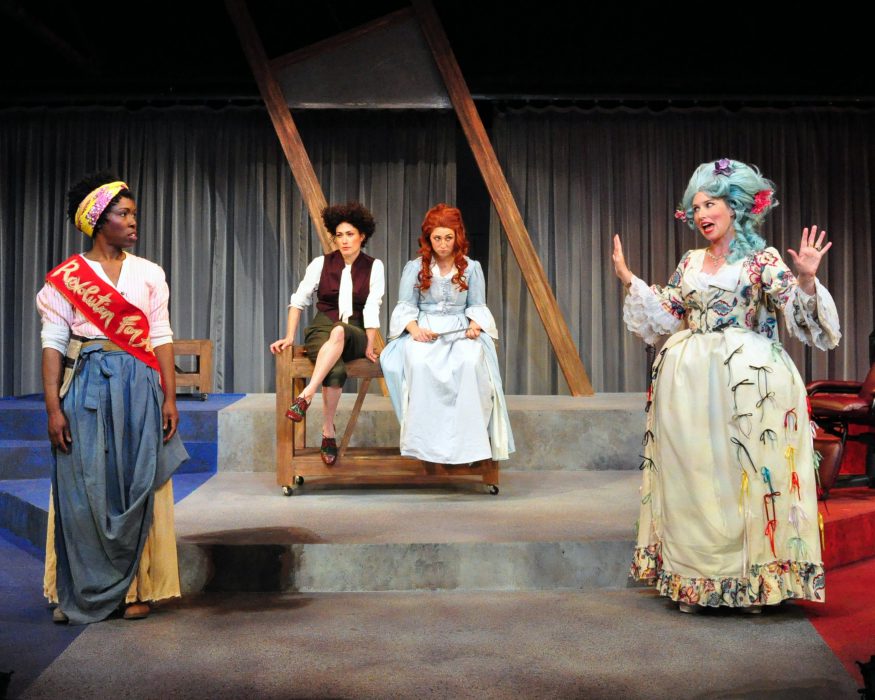 Good actors. Good director. Interesting play with a self-indulgent sense of humor and a salient point to make.

The Unicorn Theatre closes its 2018-19 season with a lively production of Lauren Gunderson’s “The Revolutionists,” a two-act piece that could be described, more or less, as a feminist meta-comedy set in 18th-century France — a time and place when an outspoken woman could lose her head by guillotine as easily as any man.

Director Missy Koonce has assembled a superior cast for this farcical but cogent essay on the fate of women during the combustible French Revolution. Set in 1793, the show opens with playwright and pamphleteer Olympe de Gouges (Vanessa Severo) struggling to settle on an idea for a new play. (The real Gouges was a fiery advocate for women’s rights who died in the Reign of Terror, leaving behind an unfinished drama in which she appears as a character lecturing Marie Antoinette on leadership, among other things.)

An unexpected guest arrives in the form of Caribbean abolitionist Marianne Angelie (Chioma Anyanwu), a fictional character who hopes to persuade Olympe to write a pamphlet about another revolution raging back on the future island of Haiti. Later they are joined by Charlotte Corday (Elise Marie Poehling), the aspiring assassin who asks Olympe to help her write an official declaration before she carries out the murder of Jacobin journalist Jean-Paul Marat. And finally the trio becomes a quartet with the arrival of none other than Marie Antoinette (Amy Elizabeth Attaway), the ribbon-bedecked queen who became the most famous aristocrat to part with her head.

The first act of Gunderson’s play is laden with inside-baseball jokes about playwriting and comical references to the mega-musical “Les Miserables.” “Who would want to see a musical about the French Revolution?” one character quips. Gunderson tries to have it both ways by making fun of her own metatheatrical conceit by creating a play about someone trying to write a play — a fact that elicits familiar groans from characters onstage. Gunderson seems to be entertaining herself to no end with these indulgences. And she gives it all a contemporary feel with intentionally anachronistic dialogue.

As a result, the show ultimately feels belabored and too long.

Even so, you’re unlikely to see a better cast bring this material to life. Attaway is a riot as Marie Antoinette, who tries in vain to persuade Gouges to make her the central figure of a romantic comedy. It’s as if the air between her ears is gradually wafting her to the scaffold where the blade awaits. Severo is at her comedic best as Gouges, creating a quirky portrait of a writer compelled to write even if she can’t decide what exactly to write about. Poehling brings a shrewd sense of comic timing to her performance as Charlotte Corday.

But the most vivid performance comes from Anyanwu, always a luminous presence on stage but here responsible for capturing the play’s heart and soul. Yes, the comedy is ridiculous and enjoyable, but beneath the froth and frivolity Gunderson creates a sobering undercurrent which comes into sharp focus in the second act. The fictional Marianne, who longs for her rebel husband back in the Caribbean, becomes a counterpoint to the historical women, whom Gunderson depicts as sincere but scattered.

It almost goes without saying that the play, by comically recreating the past, shines a harsh light on the here and now. At a time when male politicians continue to diminish women’s freedom of choice and dictate what they can and can’t do with their bodies, the guillotine becomes an inescapable metaphor.

Now allow me to conclude on a personal note. Koonce, a theater artist who has directed, produced, created, choreographed and performed on and around Kansas City stages since the 1980s, is relocating to Indianapolis. A veteran of the earliest incarnation of Late Night Theatre, Koonce has lent her talents to countless shows at the Unicorn, the Coterie, the gone-but-not forgotten American Heartland Theatre and many other venues, including community theater companies and community colleges. She directed “Chainsaw the Musical” and two versions of the original satirical holiday show, “Milking Christmas,” for the Living Room. She’s a big talent who will be missed. Let’s hope she returns from time to time to share her formidable skills with local theatergoers.