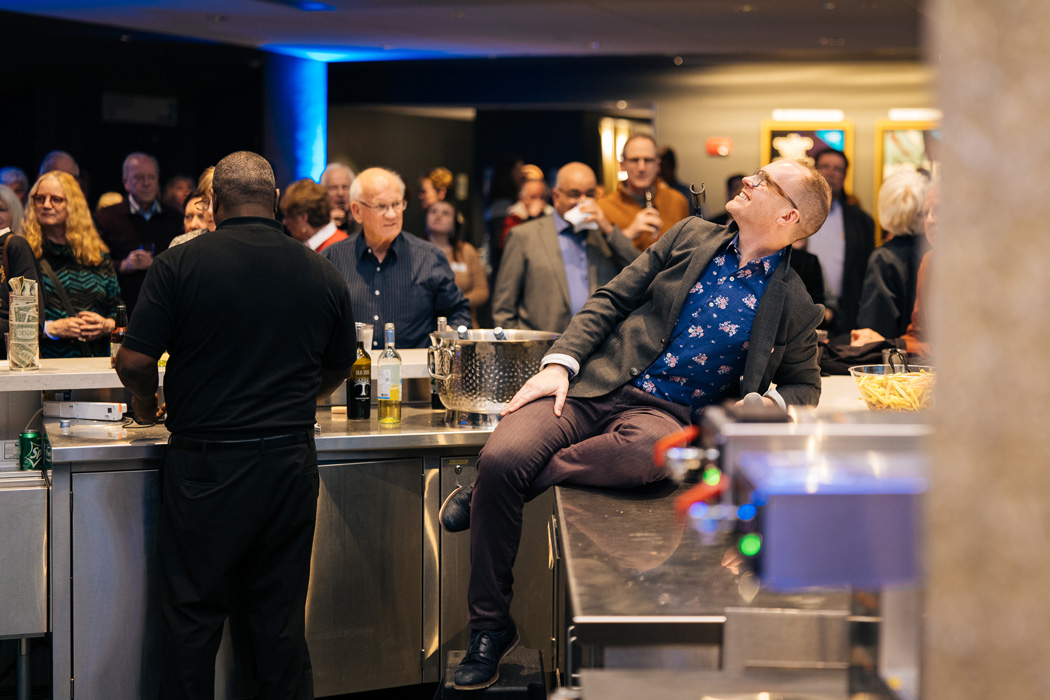 Stuart Carden has made himself a ubiquitous presence at Rep performances, mingling with the audience, striking up conversations with theatergoers and making an improvised public announcement before every performance.

When he landed the job as the Rep’s artistic director last year, he took an oath: He would be at every single performance, engage the theatergoers and listen to what they had to say. And he’s done it.

“There are nights when I’ve gone home and had a quick dinner with my family and thought: ‘Ugh, I’ve got to back,’” Carden said. “Many of my colleagues warned me against it. But to be frank, it is so energizing and so informing, and it has really shaped my perspective on programming and who this theater is in dialogue with.”

Bear in mind, that means eight performances a week for each production.

“It’s a commitment, but for me it has really paid off,” he said. “This is why I came to this city for this job. I’ve always wanted to be at a theater this size in a city this size.”

“All the plays we’ve chosen have a unique theatrical vibrancy to them that can only exist in the theater,” he said. “And I’ve been thinking about the people who we are not in dialogue with right now and how we can program to get people to walk through the door who have never been here before. I wanted this first season to really open the doors wide and invite people in. I’m hoping to reach out and signal, ‘Hey, KCRep is for you.’ I wanted to really make theater matter, and KCRep matter, to this city.”

So, without further ado, here is Stuart Carden’s first season as artistic director of the Rep. (Note: These are the dates as originally announced, but the schedules could change in light of the COVID-19 pandemic.)

“The Old Man and the Old Moon,” Sept. 11 – Oct. 4, Spencer Theatre. Billed as a “new musical folktale,” this all-ages show marks a creative reunion between the Pigpen Theatre Company and Carden, who have worked together often in recent years. Utilizing a live indie-folk band and puppetry, the show depicts the epic, Odysseus-like journey of the Old Man, who is charged with making the moon glow nightly.

Carden has staged the show 10 times with Pigpen, made up of former students of his at Carnegie Mellon School of Drama. Officially, this production will be co-directed by Carden and the Pigpen company members.

“This is Pigpen’s signature piece, and it is my signature piece,” Carden said. “This piece is so wonderfully, genuinely, an all-ages experience. They set out to do this for audiences from 9 to 99.”

Carden also hopes to organize hootenannies following certain performances, encouraging members of the public to bring instruments to sit in with the Pigpen band in the lobby area.

“They are a legitimate indy-folk band as well as building works for theater,” Carden said. “Wherever they’re performing in theaters, they do some concerts in music venues as well. There’s a really nice cross-pollination between their music and their theater pieces.”

“Dracula,” by Kate Hamill, Oct. 16 – Nov. 8, Copaken Stage. Playwright Kate Hamill has established a remarkably successful career with her irreverent reconstructions of literary classics, including Jane Austen’s “Pride and Prejudice” (staged by the Rep in 2019), and “Sense and Sensibility.” Her adaptation of Bram Stoker’s classic gothic horror novel was a recent off-Broadway hit.

“She takes a classic work we all think we know and then brings a contemporary sensibility and point of view,” he said. “She brings an inherent understanding of what works theatrically. She’s incredibly inventive. She’s not completely obliterating the plot. The essential story is still very much there, but it has been put through a contemporary lens. It’s a thrill ride. It does everything you want ‘Dracula’ to do. It feels like a thriller with a touch of horror, but she also brings a sense of humor.”

Carden said he expects Hamill to be in Kansas City for the production.

“Kate is a playwright I deeply admire and is a close friend of mine,” he said.

Carden said the plan is to stage the show with a virtually all-white set at the Copaken and “lots of blood.”

“The Royale,” by Marco Ramirez. Jan. 29 – Feb. 21, 2021, Spencer Theatre. Carden will co-direct this show with Stephanie Paul. The show, which he has directed before, is a fictional story based on the real-life Jack Johnson, the early-20th-century boxer who became the first African American heavyweight champion in history. The boxing matches are depicted imaginatively but without any mock stage fighting.

“The playwright doesn’t like fight choreography,” Carden said. “He invites you to invent your own visceral experience. He invites you to live in a place of physical poetry rather than realism.”

For this production, Carden wants to try something new by taking the play out on a “community tour” after its initial run at the Spencer Theatre.

“Every season, we’re going to do one show that we take out into the community,” he said. “It will be fully designed at the Spencer, and then we’re going to take it out at five different community settings to perform ‘The Royale’ in a 15-by-15 square. It’s really born of the belief that everyone deserves access. Not only do I love this piece,
I believe that theatrically it will be every bit as thrilling in a 15-by-15 square under fluorescent lights as it will be in our theater.”

Origin KC: New Works Festival, Feb. 19 – March 21, 2021, Copaken Stage. The plays, performed in repertory, will be “Flood,” by the widely produced Mushtaq Deen, and “The Vast In-Between,” by Laura Eason, whose adaptation of “The Adventures of Tom Sawyer” was staged by the Rep several seasons ago.

“In the Heights,” March 19 – April 11, 2021. Spencer Theatre. The Broadway hit, about a Latinx community in Washington Heights at the northern tip of Manhattan, is the show that established Lin-Manuel Miranda before he created “Hamilton.” Miranda wrote the music and lyrics with a book by Quiara Alegría Hudes.

Carden said the show will be one of the biggest musicals the Rep has done. It requires a large cast of Hispanic actors and dancers, a crack band and visceral choreography.

“This piece, like no other contemporary piece I know besides ‘Hamilton,’ has the amazing combination of style and reach and the ability to attract people to walk through the door who have never been to KCRep,” Carden said. “It’s a musical that resonates with folks who don’t traditionally come to the theater.”

Carden is counting on the show to attract a large, diverse audience, “from the people who love a dance musical to people who are just Lin-Manuel Miranda fans. This is one of those pieces that has a kind of electric title recognition. The movie will launch over the summer, and we really believe it will excite more people about the music and want to come see it live at our theater.”