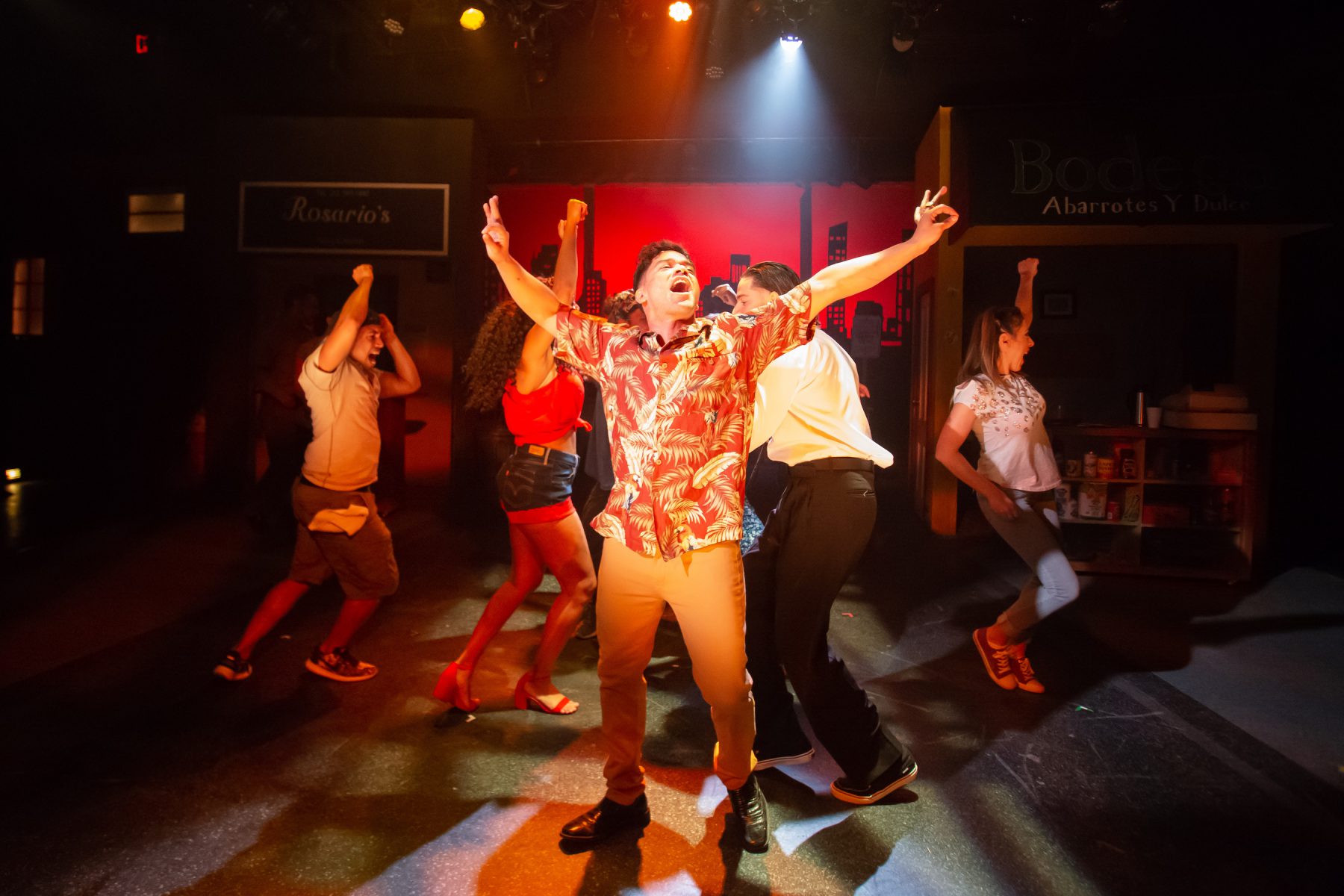 Francisco Javier Villegas and the company of “In the Heights.” (J. Robert Schraeder)

Before “Hamilton,” there was “In the Heights,” which marked composer/lyricist Lin-Manuel Miranda’s auspicious Broadway debut in 2008.

As he would do in “Hamilton,” Miranda incorporated rap and hip-hop into a musically diverse score for this pulsing love-letter to the largely Hispanic community in Washington Heights, a neighborhood at the northern tip of Manhattan. Whether “In the Heights” is the first rap musical on Broadway is open to question. Some might point to Meredith Willson’s score for “The Music Man” way back in 1957. (Seriously, go back and listen to the idiosyncratic opening, “Rock Island,” and then the call-and-response “Ya Got Trouble.”)

All that matters is that Miranda’s eclectic score for “In the Heights” is exciting, unpredictable, quirky and sometimes achingly romantic. His lyrics are imbued with wit and sophisticated rhyme schemes. That might be enough, but as a dramatist he also creates multi-layered characters and complicated conflicts. The bottom line is this: In 2008, nobody had seen a Broadway musical quite like this one.

MTH Theater, the resident professional producing/presenting company at Crown Center, serves up a lively, intimate reading of Miranda’s sprawling musical, directed by Nedra Dixon and choreographed by Kenny Personett. The show requires a big cast and at times the intimate theater’s thrust stage gets a little crowded, but the actors are fully committed to the material — none more so than Francisco Javier Villegas, who anchors the production with an exceptional lead performance. Villegas, an actor I’ve watched and admired for years, is riveting as Usnavi, the owner of a small neighborhood coffee shop whose family history and emotional longing form the heart of the show. Villegas, who performs with a perpetual gleam in his eye, can charm an audience with ease. But here he performs at a skill level that inspires and mesmerizes. Even better, he handles Miranda’s sometimes complicated lyrics with breathtaking clarity.

Miranda and book-writer Quiara Alegria Hudes spin an evocative tale that at times gets a little too intricate for its own good. One storyline focuses on Usnavi’s attraction to Vanessa (Lily Nicholas), who works at the neighborhood beauty salon and dreams escaping the barrio by moving downtown. A parallel story depicts Nina (Gabriela Delano), who has kept her struggles at Stanford from her parents (Keenan Ramos and Franci Talamantez-Witte) and has now returned to the neighborhood feeling like she’s let her family and neighbors down. But she attracts the romantic attention of Benny (Anthony J. Gasbarre III), a longtime friend of the family who works for the taxi company her parents built from scratch.

All of these characters are one missed paycheck away from financial disaster, but things take a turn with Abeula Claudia (Alma Fusco), the barrio’s unofficial matriarch, buys a winning lottery ticket that can change the lives of Usnavi and others. The show succeeds in its depiction of a community in which triumphs, failure, pleasure and pain are transitory — change is inevitable and all things come to an end, even if they lead to new beginnings.

The energetic cast benefits from Dixon’s close eye on comic timing. The big cast brims with talent. Among the standout performers is Vanessa Davis, as the boisterous Daniela, owner of the beauty salon, who fills the stage with warmth and humor. Ramos and Talamantez-Witte share a storyline that puts the characters in conflict more than once and each performer makes the frustration, anger and joy of a long marriage palpable. Nicholas, as Vanessa, is a luminous presence who shows off a stunning singing voice. And Douglass Walker impresses in the brief but richly comic role of the Piragua Guy, a street vendor; Walker’s crystalline voice makes you wish he had more stage time.

Lighting designer Amanda Zieve bathes the stage in rich colors and helps underscore the emotional changes as the story unfolds. Brad Shaw’s costumes are easy on the eyes. And sound designer Jon Robertson achieves admirable clarity in a show that has so many voices performing at once. Musical director Pamela Baskin-Watson leads a tight ensemble of five musicians who bring the score to life.

Kudos to MTH for being the first local company to give this show a professional production. Like “Hamilton,” this musical lingers in the mind long after the final curtain.