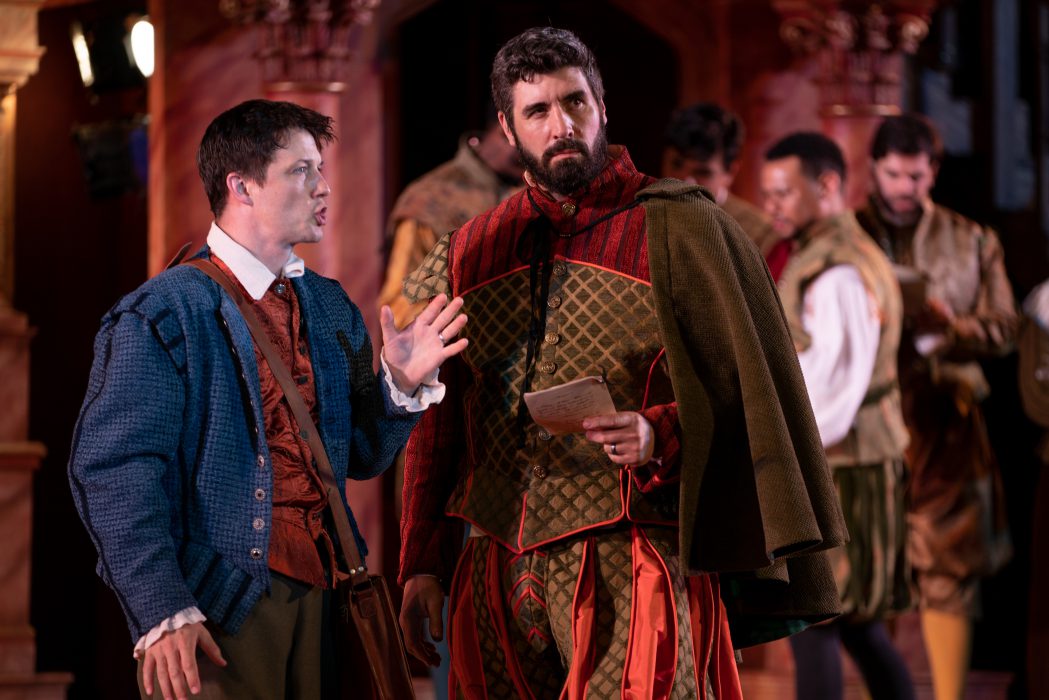 Let us begin with a confession. As I drove home from the lively opening-night performance of “Shakespeare in Love” at the Heart of America Shakespeare Festival, I found myself contemplating a basic question: Why, exactly, did there need to be a stage version of the 1998 Oscar-winning movie co-written by Marc Norman and playwright Tom Stoppard?

The answer may be pretty simple: Because American regional theaters — including Shakespeare festivals — can always use another crowd-pleaser to boost attendance.

Don’t get me wrong. The festival production is everything it needs to be. It’s funny, charming, romantic and, if you look closely, meaningful in its reflections on the creative process and the agony involved in artistic creation. The production also showcases a great cast made up of festival veterans.

At any rate, this is a historic moment for the annual festival. It marks the first time the venerable organization has staged a play written by someone other than William Shakespeare. Theatergoers will encounter a comedy/romance that balances farce with romantic longing, captured vividly by Matt Schwader as Shakespeare and Hillary Clemens as the fictional Viola DeLesseps, a noblewoman driven to be an actor — so much so that she conceals her gender. Schwader and Clemens are real-life spouses who perform together with ease and effortless charm.

Lee Hall’s adaptation follows the film’s busy plot closely and reiterates its wit and jokey backstage humor. We get snippets of speeches Shakespeare wrote and Hall, like the screenwriters, litters the story with amusing lines from the Bard’s work that are voiced utterly out of context.

As the play opens young Will Shakespeare is struggling to make headway on a new comedy tentatively titled “Romeo and Ethel, the Pirate’s Daughter.” He gets a little help from fellow playwright Christopher Marlowe (Cody Proctor) as he faces a looming deadline to deliver a finished script to producer Phillip Henslowe (John Rensenhouse). Will has also promised the play to rival producer Richard Burbage (Matt Rapport) and struggles to keep each of them at arm’s length as he hopes for a burst of inspiration. Henslowe, for his part, is facing intense pressure from his financial backer Fennyman (Bruch Roach), who isn’t above ordering his goons to rough up someone to make a point.

The romance between Will and Viola is, of course, destined to be bittersweet. Shakespeare is married, although he hasn’t seen his wife back in Stratford for years, and Viola has been promised to the foppish Lord Wessex (Todd Lanker, in an over-the-top comic performance). One aspect of the play lingers beyond the comedy and romance, and that has to do with the creative process. As the story unfolds, we witness what begins as a ridiculous comedy about a pirate’s daughter slowly metamorphose into the timeless tragedy, “Romeo and Juliet.” The point is clear: Artists and writers rarely know where they’re going.

It’s a big cast with nice moments scored by longtime festival veterans as well as relative newcomers. Rensenhouse, Rapport and Roach turn in detailed comic performances. Matt Williamson is impressive as the actor/director Ned Alleyn; Williamson is the kind of actor who commands our attention simply by walking onstage.

The costumes, credited to designer Mary Traylor, are spectacular. The other design elements are visually impressive. And composer Greg Mackender contributed evocative music which, in terms of mood, becomes connective tissue holding the production together. Singer Matt McAndrews brings the music to life.

The play feels too long before the final curtain, but the time is necessary to accommodate a complicated plot and to give the fine performances room to breathe. This show will stick with you.

The Heart of America Shakespeare Festival production of “Shakespeare in Love” runs through July 7 in Southmoreland Park, just west of the Nelson-Atkins Museum of Art. Call 816-531-7728 or visit www.kcshakes.org.