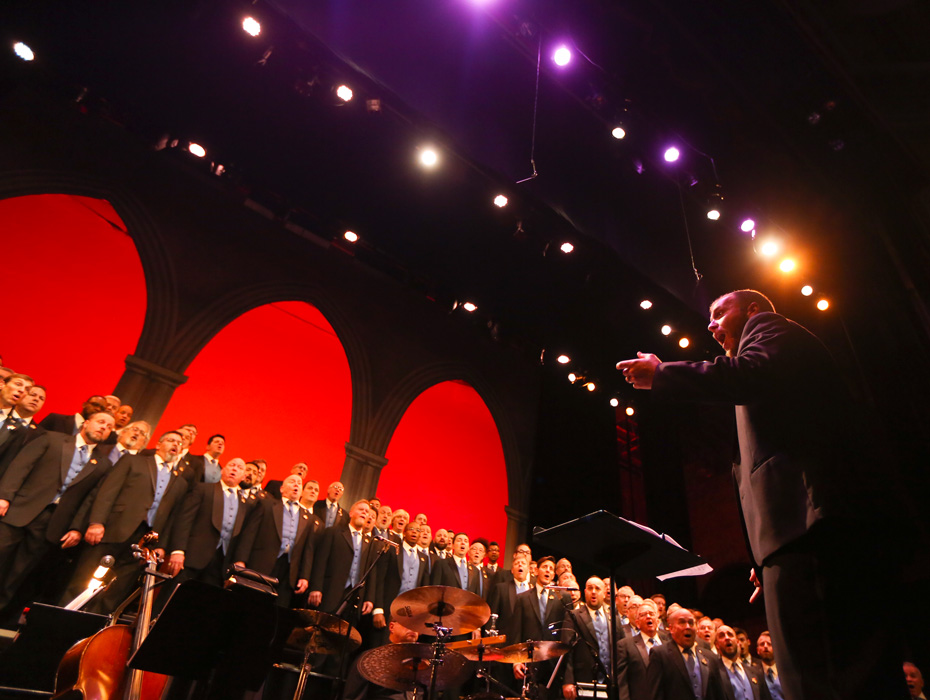 Voices in unity have a profound force. The members of the Heartland Men’s Chorus (HMC) have raised theirs for 30 years, serving as a positive force for a community that suffers, still, from prejudice, abuse and loss. They are, and are proud to be, Kansas City’s Gay Men’s Chorus.

In 1986, 30 men joined together as a gay men’s chorus, holding their first concert in the University of Missouri-Kansas City’s Pierson Hall. Some feared they might be outed and lose their jobs, but still they sang: to raise the profile of the gay and lesbian movement and to send a message of brotherhood, acceptance, strength and hope.

They sang to remember their lost friends and family, dying at an alarming rate in the ghastly shadow of the AIDS epidemic.

They sang because they loved to sing.

Over the decades, the chorus has grown from 30 to more than 150 active volunteer members, with a dedicated administrative staff, board of directors and non-singing volunteers. Three founding members are still active in the chorus today: Keith Grahl, Stephen Johnson and Randy Hite.

The ensemble regularly receives positive reviews. It has won awards, is respected within the community of gay and lesbian choruses (GALA Choruses), and is considered a top-tier ensemble in terms of budget, organizational size and musical excellence, according to executive director Rick Fisher, who has sung with the chorus since 1996.

There is exuberance to the HMC’s shows, sung with passion, verve and commitment.

“I think it’s important to strike the balance in every concert,” said artistic director Dustin Cates, who joined the chorus in 2014. “There are opportunities for all types of music to speak.”

[block pos=”right”] “You must rely on the unique talents and abilities of others to ultimately achieve something beautiful.”
—Dustin Cates, artistic director, Heartland Men’s Chorus [/block]

Artistically, the leadership has traditionally pushed the group to master challenging repertoire, a difficult task in an all-volunteer ensemble with members at a variety of ability levels, including some who can’t read music.

Cates said he expands the boundaries of their abilities because the end result is so rewarding. “Both in my role as a teacher and now as artistic director of HMC, I love giving the choir the opportunity to sing a piece that they never, ever thought they would be able to perform. During the rehearsal process their limits are challenged, but seeing them go through the transformation of ‘this is too hard, we can’t do this,’ to ‘this is my favorite thing in the world!’ is one of my greatest rewards as a conductor.

“It underscores what I believe is one of the most important attributes of choral singing,” Cates added. “You can’t do it alone. You must rely on the unique talents and abilities of others to ultimately achieve something beautiful.”

The chorus has released ten CDs and two concert DVDs. It has collaborated with choruses across the country and joined with writer and activist Dan Savage in the “It Gets Better” campaign. The group has also commissioned or co-commissioned works such as the children’s musical Oliver Button is a Sissy, Andrew Lippa’s I Am Harvey Milk, and Life is a Cabaret, a tribute to the writing team of Fred Ebb and Kansas City-native John Kander.

It is concerts like these that inspire Fisher. “For me, the big highlights are the programs that tell our stories—stories of the LGBT community that demonstrate our common humanity. They have such an emotional impact,” he said. In the spring, the chorus goes on the road for their “Testimony Tour” of communities in central and western Kansas, taking, said Fisher, “our voices where they need to be heard.”

HMC has a lot more planned for this season. In March, Cates has programmed a (mostly) a cappella concert, building on the popularity of groups like the Pentatonix and Straight No Chaser and movies like Pitch Perfect, and balancing those arrangements with a selection of traditional a cappella works.

In June, the chorus will celebrate its 30th anniversary with a concert featuring some of the highlights over the years. It will also welcome back special guests, such as former artistic director Joseph Nadeau (currently director of the Gay Men’s Chorus of Los Angeles).

The second portion of the anniversary concert will be the world premiere of I Rise. HMC commissioned Kansas City-based composer Mark Hayes to write a work using selections of poetry by Maya Angelou. Cates conceived the work and secured the permission to use Angelou’s texts, the first time her estate has granted permission for her poetry to be set to music in full.

Consideration for Angelou’s use of language is foremost in the compositional process. Hayes said that the poems all “talk about empowerment and diversity and equality and freedom. They are very passionate. They are very direct.”

He intends to write a work that is inspirational and emotive. “(Angelou) is a universal voice, she’s speaking for all people,” he said. Written for men’s chorus and chamber orchestra, the work will incorporate American choral traditions, jazz, gospel, and the rhythms and themes presented in the poems.

They’ll take this part of the show to the GALA Festival in Denver, Colo., in July. The quadrennial conference has played an integral part in the development of the chorus and the experience of the members. Long-time member Neil Solomon, who has sung with the chorus since their second concert, said attending his first conference was life changing.

Solomon remembered watching the Turtle Creek Chorale perform Kristopher Jon Anthony’s When We No Longer Touch: A Cycle of Songs for Survival, detailing the sense of loss and grief from the AIDS epidemic. “There were four or five of us, all in a row, and we were just in tears. … It was such a relief to be together with all these people, all those gay guys, and to acknowledge that we were losing all these guys, we were losing our friends.”

He continued, “It was a different time back then. It was really encouraging to be in the chorus, just to know that there was a brotherhood and there were people who really cared, and we were going to hang together until something happened.”

“It was a beacon of hope in a time when I needed it.”

[block pos=”right”]  “For me, the big highlights are the programs that tell our stories—stories of the LGBT community that demonstrate our common humanity.”
— Rick Fisher, executive director, Heartland Men’s Chorus [/block]

Tragedy has always been with the chorus, which lost two founding members prior to the first concert.  Each concert features a song tribute—the Ad Astra (To The Stars)—memorializing members who have died over the years (with their names listed in the program).

This past December, Keith Wiedenkeller was chosen to sing the solo, a notable honor. He’s been with the chorus for eight years, is a former board member and board chair, and is one of a handful of straight members.

Former director Nadeau recruited him. “To put it bluntly, I said, ‘Don’t you have to be gay?’ ’’ Wiedenkeller recounted.  “And he said, ‘no.’ I thought that was kind of cool.”

Cates continues that philosophy. “My definition of gay men’s chorus does not mean that everybody in the chorus is gay or even that everybody in the chorus is a man.  Clearly drawn lines around gender and orientation are changing before our eyes and we have a responsibility to keep up. To be a member of Heartland Men’s Chorus we ask that you be able to sing tenor or bass and subscribe to our mission to make music that makes a difference.”

Part of that mission is building community, a core function since the beginning, and it is an internal and external goal.

“The chorus has an established reputation of musical excellence,” said Cates, “but the best kept secret is the care and support the chorus offers to its members and the outreach and advocacy the chorus provides to our community.”

They raise money for medical research and they raise awareness for civil rights causes. Each concert features an American Sign Language interpreter, furthering their mission of inclusion.

They also provide emotional support for each other, like a second family.

“There are guys I’ve know for 25 years,” said Solomon, “if I broke my leg, they’d…take turns bringing me food.”

Cates said that when his four-year-old son attends events—he’s even conducted the chorus a few times—the members joke that he has 150 qualified babysitters.

In some cases, though, the chorus becomes a member’s chosen family, when their given family refuses to accept their true selves.

But, as with many families, not everything goes smoothly. Early on, the group divided over the name, with some wanting to be called the “Kansas City Gay Men’s Chorus,” a dispute that ultimately caused a loss of core, founding members.

Despite setbacks of loss, disagreements and prejudice, the group has grown into the astounding ensemble that it is today, flourishing despite social and artistic challenges.

“When you see 150 guys up here, all out and proud, it makes a difference, and every single concert we have, it changes somebody’s life, and that’s what really makes it such a great organization to be part of,” said Wiedenkeller. “It has really changed our lives. Our daughter came out to us several years ago…and I’d like to think our involvement with the chorus made that easier for her.”

This evidence of support has a positive impact on those in the chorus, as well as their audience. “It’s family-friendly entertainment for a high school kid who might be questioning, and the parents have got to figure that out before the kid, sometimes. And sometimes it leads to a family discussion…that’s what we’re there for, really,” said Solomon.

For kids who don’t have a supportive environment, “the chorus lets those kids know that they can make a great place for themselves in the world,” Paul Backer said in an email. Backer, who’s been with the chorus since 1991, wrote the history posted on the HMC website in conjunction with the 25th anniversary of the chorus.

“I can’t imagine not being in the chorus,” he concluded. “The men have a variety of reasons for joining, but I think eventually we all come around to the realization that, ‘Hey, we can change people’s lives with our music. We can make the world a better place.’ ”

KC Studio and KCPT have teamed up to cover the arts more fully. Tune in to Arts Upload on April 21 at 7:30 p.m. to see the Heartland Men’s Chorus in action. Or watch it online at kcpt.org/artsupload