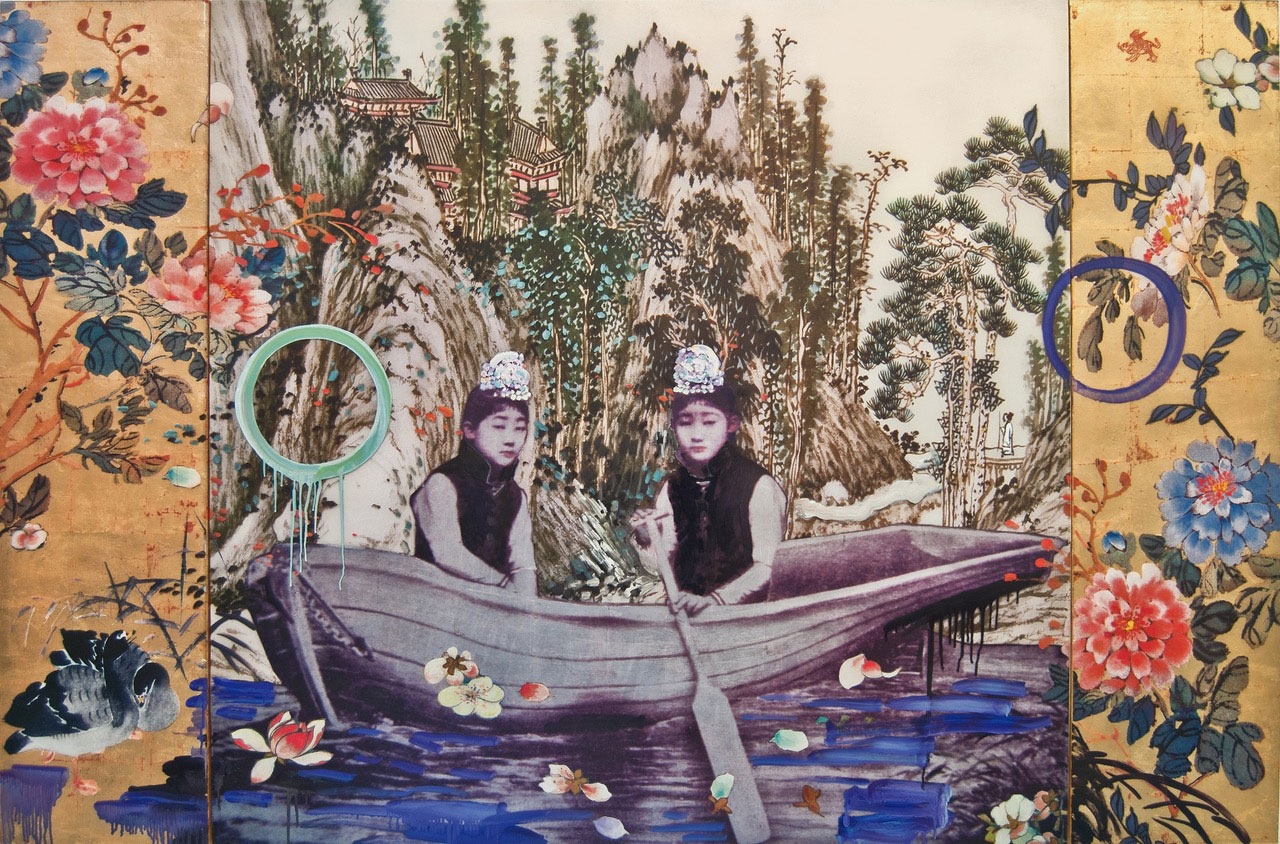 “Melodramas: In Memory of Hung Liu” celebrates the life and work of the internationally exhibited Chinese-born artist who died last August. The show was jointly organized by Sherry Leedy Contemporary Art (where it is currently installed), and Byron C. Cohen Gallery, and features about 25 mixed media works from 1992-2021.

Photography plays an important part in Liu’s work, as it often offered her the images on which to base her subjects. It is very difficult to find photos taken in China before 1970, as most were destroyed per Mao’s decree to erase the past in favor of his New China. Hung Liu was particularly interested in finding old photographic portraits of Chinese people; she has recycled subjects as diverse as empresses and prostitutes. These likenesses are transformed into paintings — first by cropping, then adding color, texture and details. The additional use of coats of resin and linseed oil washes conveys a sense of layering in her work. In “Double Exposure” one sees two prostitutes seated in a Chinese-style rowboat with a backdrop of a mountainous landscape flanked by vertical panels of colorful flowers. The addition of such fantastical elements engulfing the pair of sober-faced young women is theatrical and dramatic, yet also manages to bestow on them a bit of humanity and dignity that likely eluded them in real life. Liu’s sense of empathy for the forgotten and the overlooked resonates throughout the exhibition.

The poverty and desperation that the artist experienced while working in the fields helped her to feel an instant connection to the work of the American photographer Dorothea Lange. Lange, who is best known for her Depression-era studies of the homeless and unemployed, provided inspiration for the most recent work in “Melodramas.” In “Migrant Boy with Bunny” and “Migrant Girl with Puppy,” both from 2021, the artist created painterly versions of Lange’s photographs, silhouetting the portraits and colorizing their formerly black and white renditions. Colored discs have been added to their periphery, providing a bit of drama and expanding their presentation.

Liu has had a strong connection to Kansas City through exhibitions at Kemper Museum of Contemporary Art in 1998 and 2014-15, previous gallery exhibits at Sherry Leedy and Byron Cohen as well as through the local collectors who have purchased her work. This trend will continue as two works from “Melodramas” have been acquired by local museums: the Wichita Art Museum and the Daum Museum of Contemporary Art in Sedalia.

Liu came to the United States in 1984 to study art at the University of San Diego after her success as an artist in her homeland. She was anxious to establish a way to make art as a Chinese while living outside her native culture. “Five-thousand-year-old culture on my back, late twentieth-century world in my face” is how she described her conundrum when she moved to the U.S. In 2021, she was the first Asian woman to have a solo exhibition at the National Portrait Gallery in Washington. The continuing appeal of her work and her success as an artist certainly confirm that she was able to attain her goal.

“Melodramas: In Memory of Hung Liu” continues at Sherry Leedy Contemporary Art, 2004 Baltimore Ave., through May 21. Hours are 11 a.m. to 5 p.m. Tuesday – Saturday. For more information, www.sherryleedy.com or byroncohengallery.com.