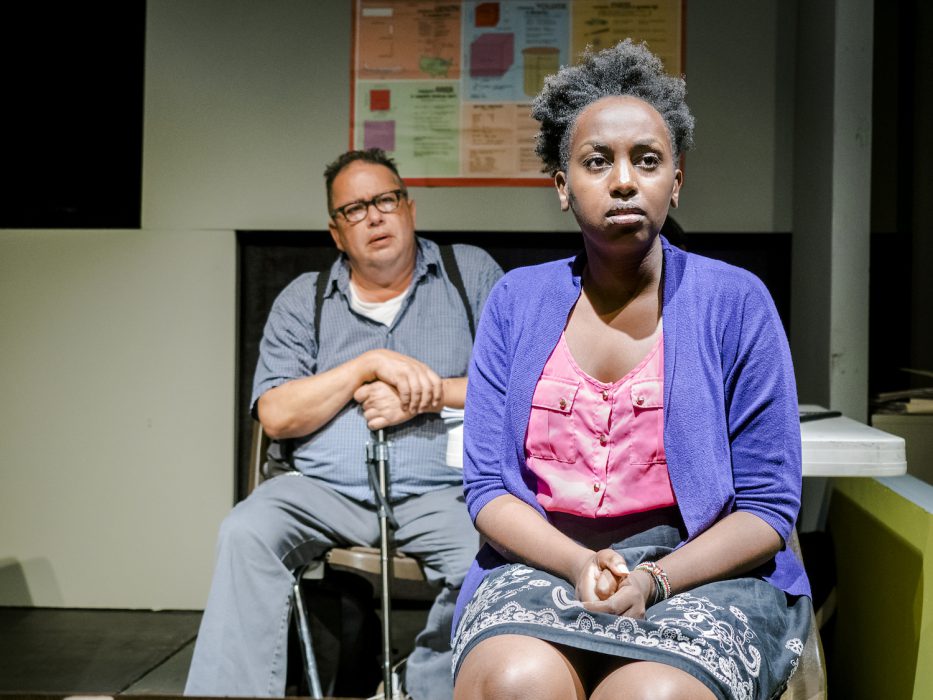 Playwright/director Harvey Williams blends raucous humor and resonant drama in his “2121,” a two-act play that emerges as a heartfelt tribute to a forgotten class of American society.

Williams, founder of KC MeltingPot Theatre, based this work on his own experiences as an instructor in a basic adult education program. As in the play, he convened classes in a trailer for a diverse group of people who shared a common goal: To earn a GED. As a result, this play brims with emotional commitment.

“Something I took merely as a part-time teaching job, strictly for the income, ended up spanning some 15 years, which allowed me to share in the seasons of joys and pains, of successes and failures in the lives of the most unforgettable students and staff I was blessed to know, teach and work alongside of,” Williams writes in the program. “This story only touches the surface . . . It was truly a matter of having nothing left to lose.”

The physical production is a little rough around the edges. but Williams assembles a richly talented, diverse cast. Collectively the actors make this piece come alive in real time.

The school is run by Mr. Gregory (Lewis Morrow), caught between the arbitrary demands of bureaucracy and the school’s mission. Also on hand is his acerbic administrator, Ms. Tate (Lynette Sparkman-Barnes), and a new teacher arriving for her first day on the job, Ms. Kay (Elizabeth A. Hillman).

Among the students are Isha (Ebonee Grace), who volunteers as the school’s perpetually exasperated receptionist; Donald (Dennis Jackson), an older man prone to hallucinations and rants about the Devil; Ms. Neu (Njeri Mungai), an African immigrant who needs permanent residence; Damon (Orlando J. Newton), a young man forced out of high school by social pressure; Rick (Timothy Burks), a young man on parole; Catherine (Carol Leighton), an older woman who harbored racist views until becoming one of the school’s diverse students; and Floyd (Philip Hooser), a cantankerous senior citizen given to malapropisms and deeply paranoid about the federal government.

The students, after learning of impending budget cuts that would force the dismissal of most of them, occupy the trailer in protest. Soon they are joined by the teachers and administrators who begin demanding meetings with state officials, including the governor, in an effort to save the school. A couple of cops, the belligerent Commander Mann (Nick Hazel) and the novice negotiator Office Ray-Ray (Shereese Murphy), make an effort to defuse the situation.

During the performance, Williams provides back story and context in short black-and-white films projected above the stage, in which we see a number of other strong actors, including Jerron O’Neal, Arthur Newton, Melissa Fennewal and Lynn King. On screen is the first time we see Reina (Joileeah Worley), the governor’s daughter, who empathizes with the protestors so much that she finds a way to sneak into the trailer and become an onstage character in Act 2. The filmed scenes are connected by clips of War Drum-Ma (Danielle Foster), whose spirited solos on a drum kit echo the characters’ desperation and drive.

If that sounds like a lot of characters, you’re right. Williams adapted this piece from a screenplay he wrote several years ago. The result is a play with lots of voices and lots of story. Some major events happen offstage because of the limited production budget. So, yes, it becomes a little unwieldy at times, but never so much that we lose sight of the basic humanity at its core.

Williams sense of humor can be broad or absurdist. Either way, he and his actors produce some very funny material. The play opens on a comic high note as Isha, the reluctant receptionist, deals with a series of callers making unreasonable demands. But Williams is also a serious playwright, as we see in his masterful monologues. Early in the play, the addled Donald tells a story about a terrifying encounter with a woman sent, he believes, to do the Devil’s bidding at a bus stop. The writing is crisp and vivid and the actor, Dennis Jackson, plays it beautifully.

In Act 2, after the protest begins, the teachers and students begin taping monologues on smartphones and posting them to the Internet so they can get their message out to the world. These monologues, as performed by Newton, Mungai, Hooser and Leighton, are simply riveting. Their goal is to simply explain why the school is important to them, but each character’s account becomes much more than that.

Ms. Neu descries the civil-war horrors she fled in her African homeland. Catherine talks about her changing views of race. Damon voices his regret for having dropped out of high school. And Floyd, reading from his own hand-written script, explains that he needs to be a better reader so he can understand the labels on his wife’s medication.

The poignancy is palpable in these monologues. When you match a good actor to good material, the effect is magical. It’s as if time stops. And that’s how this section of the second act comes across. If I had a rewind button, I’d watch it again.

Performances are solid across the board and some stand out. That applies to everyone who performs a monologue but also includes Sparkman-Barnes, whose take on the acerbic Ms. Tate is wonderful, and Murphy, whose comic-yet-poignant performance as Officer Ray-Ray virtually becomes the play’s heartbeat.