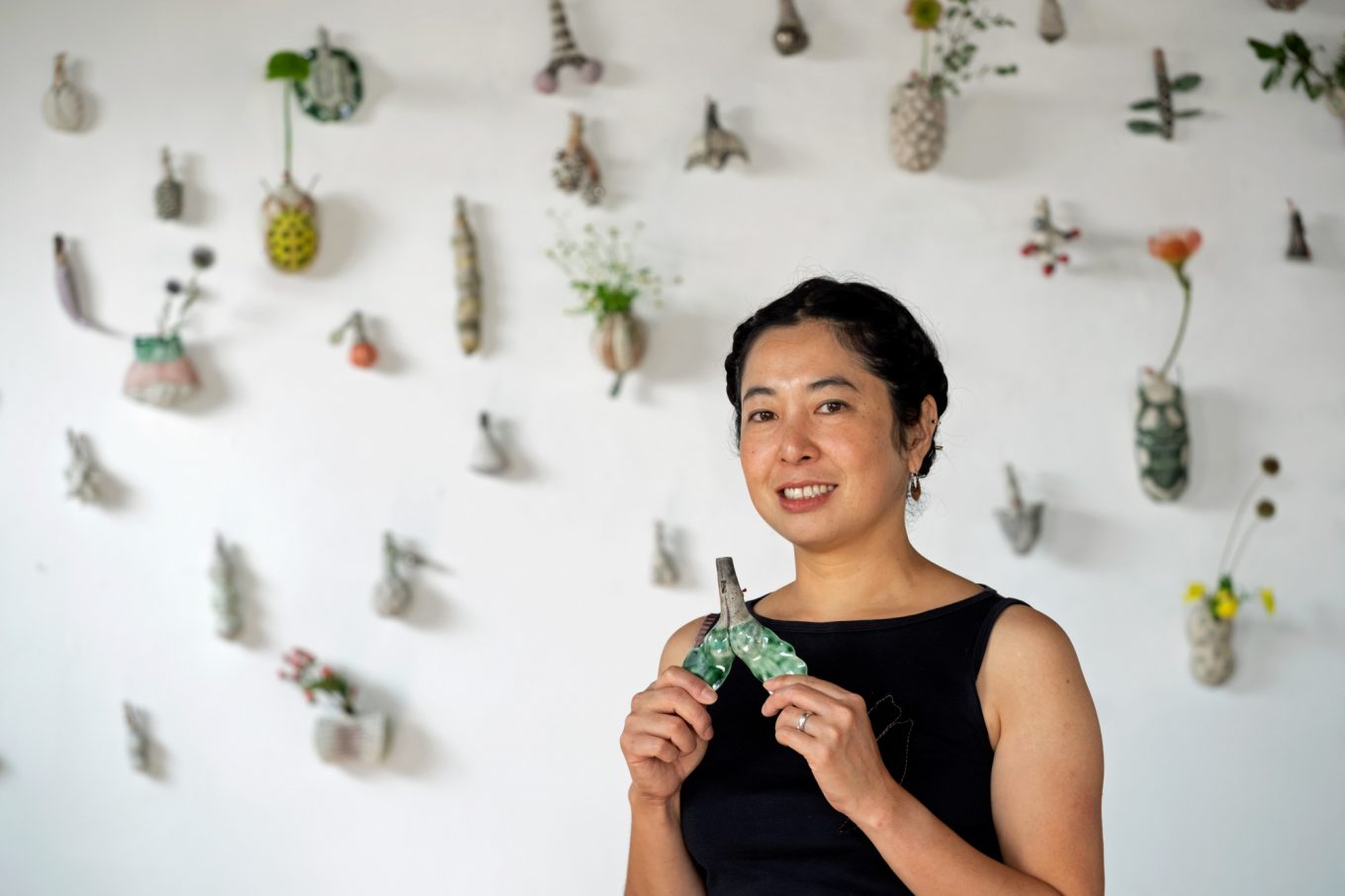 “Relics of the Deluge,” an exhibition of ceramic works and watercolors by Momoko Usami at Beco Gallery, offers viewers a fascinating view into an imaginary world of the future. Originally scheduled to open in 2020, like so many events of last year, it was postponed due to the outbreak of COVID-19.

During the shutdown, we all adopted new hobbies and ways to entertain ourselves. For Usami, artmaking became an important way to relieve her anxiety. Usami lives in Barnard, Mo., with her husband and two young children. Even prior to the pandemic, she could not help but contemplate her youngsters’ future in a world where climate change would drastically affect their lives. Her imagination and enormous concern about the challenges facing us as politicians drag their feet on the issue were the inspiration for “Relics of the Deluge.”

Born in Kobe, Japan, Usami studied art at Kyoto City University. She concentrated on ceramics, a particularly strong department at the school, where she was encouraged to create sculptural works as well as functional objects. Many aspects of the medium appeal to her; the transformation of the clay from a soft, pliable mass to a brittle, permanent form is a process of which she has never tired. The artist feels that the clay is almost alive as she transforms it into a new identity. The fact that it will not decompose in the way that an oil on canvas might deteriorate was another aspect she appreciated.

“Ceramics doesn’t decay after we finish high fire. It will not go back to dirt; the color will not fade away by sun light. It is a frozen moment, and this . . . was my big struggle using ceramic as my medium. And that’s one of the reasons I started using intangible materials like light, shadow, reflection (to) try to put some kind of interaction and human touches in my work,” the artist said.

When Usami tried to imagine what would be left after our civilization is eradicated, she realized that the medium of ceramic was the perfect vehicle to embody her relics. On one wall of the gallery, the artist has arranged whistles resembling seed pods and plants from her fantasy world. As a child in Japan, she used to collect a certain weed; she would clean it, dry it, and fashion it into a whistle. Although the whistles express a certain childhood nostalgia, they also caused her to wonder whether her children’s children would be able to experience a similar lighthearted interaction with nature.

A number of the pieces in the exhibition represent cowrie shells which mimic the shape of eyes. Cowrie shells have been found all over the world, even in landlocked areas, as they were used as currency in many cultures. Their usage as amulets for pregnant women or for fortune-telling purposes is also referenced here. Usami’s versions contain internal elements, which often rotate to provide additional images.

“Flower Skull” was inspired by archaeologists discovering a Neanderthal grave in northern Iraq that was dusted with flower pollen. “It suggests that someone had laid flowers at the burial . . . I like imagining new life coming out from this act of empathy. Empathy that I feel is missing somehow in this era of a profit-driven world. The flower buried with death dropped the seed. The eggs on their leaves would hatch. The death would be a nutrition for starting the life of a new generation.”

Four figures, each titled “Covetous Congregation,” were created during the lockdown. Each seated figure holds a shell containing a copper two-dimensional skull. When sunlight hits the metal at a certain angle, a golden reflection appears on the face of the figure, symbolically revealing his greed. For Usami, the pandemic exposed how selfishness and avarice were prioritized over human life.

Usami has succeeded in posing difficult questions with beauty and humor. The thought-provoking question of “what do you want to leave to the future?” may be a painful subject to explore, but the artist has offered it to us with her special combination of whimsy and visual intrigue to help the medicine go down.