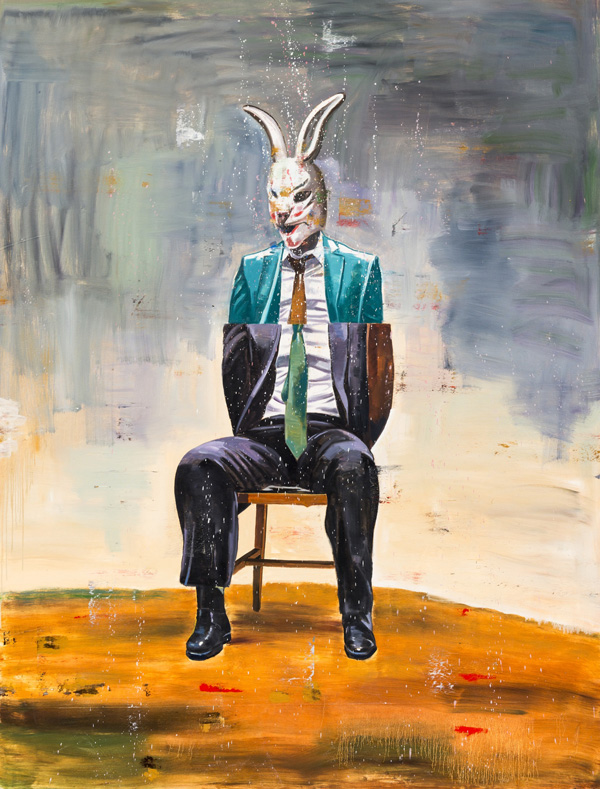 It’s a man’s world that Nicky Nodjoumi paints and that hasn’t been a good thing for the planet or its inhabitants. His exhibition of bold figurative oil paintings “The Long Day,” now on view at Block Artspace, burrows under the skin and into the mind with bizarre depictions of cabalistic power brokers acting out their shadowy agendas on the global stage.

For Nodjoumi the geopolitical chess match isn’t just a remote news headline but a plot point with personal ramifications. Here is an artist who has risked and sacrificed much to continue painting freely in the United States. How do artists know they have power? When a corrupt state tries to deprive them of it. Nodjoumi was forbidden to teach or exhibit in his native Iran. The nature of the censoring regime hardly matters. They come, they go. The artist persists, sharpening his vision in the face of absurd imbalances of power and profound distortions of mediated reality.

This is evident in his large 2017 oil painting “On going conflict.” Behind a pungent red curtain two male suited figures stand on a low horizon with violent blue-black storm clouds dominating the background. The figure on the right, clad in a bear mask, bears more than a bodily resemblance to the current U.S. President while his companion shares a likeness to a certain Russian foreign minister.

The bear-faced figure is shot through with arrows but appears immovable despite his companion’s attempt to steer him by the arm. As though viewed through the artist’s X-ray vision, the companion’s suit breast and skin tone are dyed in red. Spliced below the knee, his suit pants transform to a harlequin pattern, a visual sign that surfaces repeatedly in this body of work.

With a Duchampian wink Nodjoumi’s highly modeled male figures costumed in bland business suits, as in “Men descending the stairs,” have all kinds of tricks up their sleeves. Whether buffoonery or devilish mischief it is likely to be at our expense. These seven men, in a fill-in-the-blank hall of power, are masquerading, disguised, or hiding in plain sight. The artist reminds us that when it comes to The Man, surface appearances consistently betray contrasting realities beneath; he aims to unmask their (un)true colors for us.

Nodjoumi takes it to another level of high strangeness by including a veritable bestiary of symbols for power. Seamlessly mixed in with his surreptitious suits are the donkey, toad, baboon, fox, rabbit, bear, and chimpanzee with all their rich associations to the human realm in play. The interchangeability of human and animal bodies ensures that the carnivalesque and grotesque are close at hand.

In the creepily expressive “Night Watch,” we encounter a nude prostrate human figure as its upper half transforms into a harlequin toad. In the foreground staff-bearing suits solemnly observe the amphibian/human hybrid within sniffing distance of its offending end. The drab hollow men show signs of the artist’s figurative splicing. He cuts them off at the knees to reveal their off-set pant legs painted red. One figure has a red head, another blue. The figures stand on a loosely painted swath of decorative arabesques, one of several visual hints to his Persian heritage.

Nodjoumi’s oil paintings appear to dwell in multiple centuries at once suggesting that, per the exhibition title, this has been a long day of malfeasance, indeed. The constructed human and animal figures that predominate are rendered with expressionist verve though with rather arid brushwork that leaves the texture of the canvas perceptible. Several works are overpainted with vigorous vertical splatters of white wash as though anointed by the artist. His use of pastoral landscapes, often tilted sideways in the composition, have the vagueness of theatrical backdrops, painterly but indefinite, at times apocalyptic. He frequently employs disorienting shifts in scale that further tell us we’re on an increasingly wobbly ground.

The curator’s inclusion of more than 20 of Nodjoumi’s study drawings is particularly welcome in tracing the artist’s visual thought process and his manipulative approach to the body. Assembled from an archive of photographic imagery, the photocopied, cut, torn and collaged bits reveal inventive play and biting humor in the spirit of the 19th-century French satirist Honoré Daumier.

In three small preparatory works we see Nodjoumi moving chess pieces about before the final dénouement of the finished 2018 painting “The end of the road.”  A seated double figure collaged in torn pieces on a white background receives multiple layers of sideways landscapes that echo into the final work, a haunting visual metaphor for the distorted narratives around the contested commodity of oil.

A final standout in the exhibition is the massive triptych ink drawing on paper, “This is Aleppo No. 2.” Nodjoumi draws us into the bombed-out scene that could stand for any number of locations scarred by war and terrorism. The abstraction of the black and white gives us enough distance to bear witness to the decimated urban, therefore human, landscape. The omnipresent suit with staff bows ominously over the scene as if to say, “My work here is done.” Or “What have we done?”

Nodjoumi is a sagacious seer who quietly creates space for provocative questions to emerge:  where lays the power?  How does the power lie? Who is The Man? Are we watching a movie? Will it end in fire or ice? A bang or whimper? Will we laugh or cry? Was it all for show? For Nodjoumi, like Hamlet, the play’s the thing wherein he’ll catch the conscience of the king.