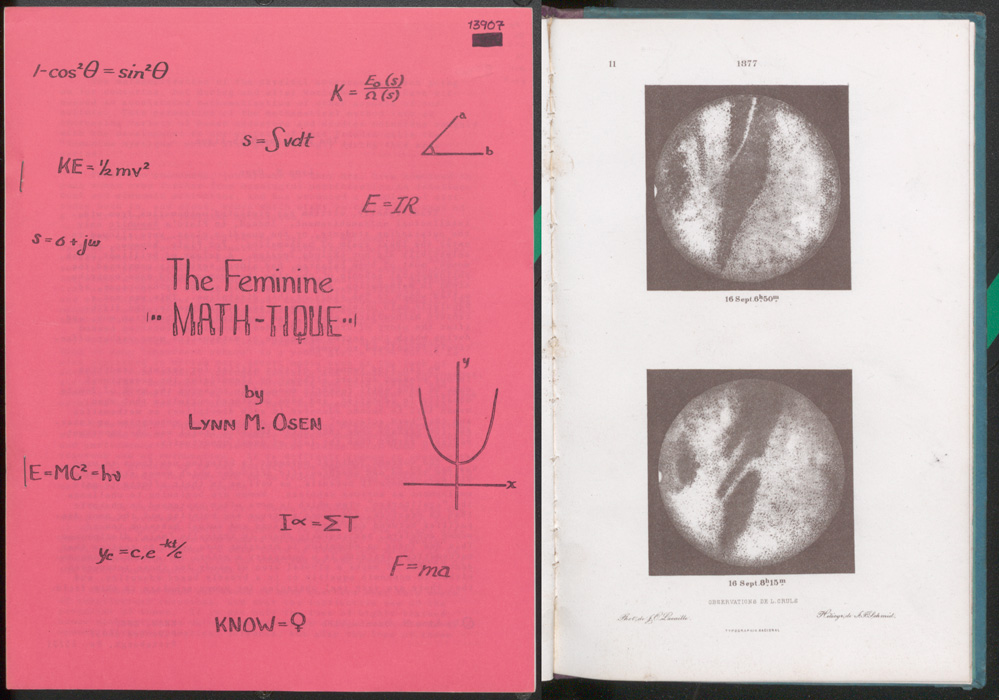 Much as Betty Friedan’s “The Feminine Mystique,” published in 1963, challenged the myth of American women’s contentment as housewives with minimal education, Lynn M. Osen’s “The Feminine Math-tique,” written in 1971, challenged yet another myth — the feminine math-tique — which encourages the notion that to enjoy mathematics is at variance with one’s womanhood.

Osen’s book is part of a small virtual exhibition on the Linda Hall Library’s website (lindahall.org/exhibitions) highlighting four recent acquisitions in advance of future, actual rotating exhibits of new acquisitions in the Library’s West Gallery. As President Lisa Browar explains, many of these new acquisitions explore new areas of research reflecting the changing interest of its patrons, including women in science and mathematics. Osen’s book is one such acquisition, wherein she offers a brief account of the challenges women have faced and overcome in the field of mathematics from ancient Greece through the 1960s.

Osen was an accomplished statistician who worked at the Alameda (CA) Naval Air Station during WWII and was recognized for her contributions to the Navy’s first computerized record keeping system. After raising a family and getting involved in various women’s organizations in California, Osen returned to college, earned her bachelor’s and master’s degrees in psychology, and taught at the University of California, Irvine, where she helped organize the University’s first women’s studies program.

Osen’s questioning of the “feminine math-tique” is borne out by two of her predecessors, also in the Linda Hall collection, Ada Lovelace and Maria Gaetana Agnesi. The more famous of the two is Ada King, Countess of Lovelace, an English mathematician who is credited for her work in the 19th century on Charles Babbage’s proposed analytical computer, considered by some as one of the earliest forebears of today’s programmable computers.

On Feb. 18, 2021, the National Aeronautics and Space Administration landed a rover, appropriately named Perseverance, on Mars, its mission being to seek signs of life on the planet. The mission has once again sparked our centuries-old curiosity about life on Mars.

Those caught up in this fascinating piece of history will no doubt be attracted to another LHL acquisition in this virtual exhibition. In 1878 the Belgian-Brazilian astronomer Luiz Cruls published “Mémoire sur Mars. Taches de la planète et durée de sa rotation d’après les observations faites pendant l’opposition de 1877” (roughly translated as “Photographic Observations of Mars During Its Opposition in 1877”), which set off speculation as to the “canals” on Mars by providing the best images to date of the surface of the planet.

In 1893, the Italian astronomer Giovanni Schiaparelli, in his “Il Pianete Marte” (“The Planet Mars”), working from his own images of the planet taken during the opposition (when the earth is located between the sun and a planet, providing the best times to see a planet in the night sky), was among the first to ascribe the markings to actually being water-bearing canals. He was followed by Percival Lawrence Lowell, the American astronomer and founder of Lowell Observatory, who, at the turn of the 19th to the 20th century, theorized and aggressively popularized the theory that the Mars “canals” were not natural features, but rather channels of water cut by a dying civilization.

Lowell’s theory became the rage for decades to come but may finally be put to rest by NASA’s Rover. In the meantime, you can take a look at the works of all three astronomers in the Linda Hall collection.