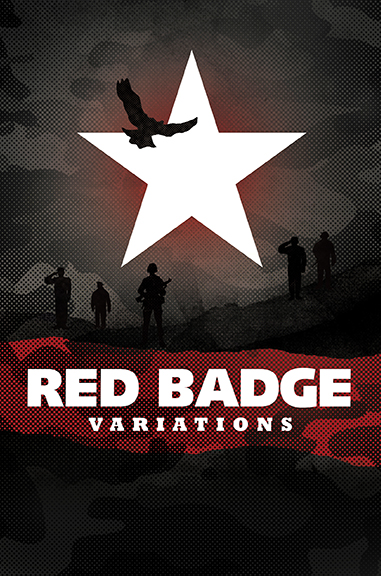 Stephen Crane’s Civil War novel, The Red Badge of Courage, captured the fear of war and the reaction of just a few soldiers, demonstrating the anxiety and distress that most likely permeated thousands. For Red Badge Variations, written by Melissa Cooper, five actors will portray the experiences of young American combat soldiers today. The play opens the Coterie Theatre’s 2013-2014 season on Sept. 17 and runs to Oct. 5.

Kyle Hatley, associate artistic director at the Kansas City Repertory Theatre, journeys into the theater community in town and directs at other venues. This is his second time to direct at the Coterie. “Playwright Melissa Cooper intrigues me. First, she clearly gained inspiration from Crane’s novel. Noticeably, the modern take and the old novel hold the same ideas. There are the universal themes of what it means to be a soldier: to serve your country; to serve your fellow man; and the possibility of sacrifice. It’s not a play that says war is bad or good, but it looks at five young men who are in an outpost in an area of conflict in Afghanistan. As an audience, we get to see the psychology of waiting,” Hatley says.

While the play never examines a fire fight, the audience sees the in-between, the sometimes long stretches of time. “It’s a lot of hurry up and wait. And remember these guys are supposed to be 22 years old or younger. They either enlisted or they joined because they had no alternative. Melissa is such an honest writer and the way she tells the story, you know she has been in contact with veterans,” Hatley says. For their research and expertise, third-year UMKC MFA student Logan Black, who served in the military, is aiding the team. They will also join in a mini boot camp. “It’s rare to do a war play in this way, but it’s a great opportunity to tell this story. We get to see service, sacrifice and honor. The guys fight for the person next to them, but it’s that metaphor for fighting for the whole country.”

A play brings an immediacy of truth and action as the story is played out in front of an audience, Hatley says. “It’s not catching 10 minutes of the story on the news or going to see a film, but for 70 to 80 minutes, the audience is so close to these actors as we are going to stage the play in the round so audiences can see the whites of the actors’ teeth or the tears in their eyes. It’s more profound than just what is on the news. I knew war plays existed, but my first experience at reading this script, I had never read a play like this or experienced a play that moved so quickly to my heart. This play has tragedy and humor. It’s definitely a heavy hitter for the Coterie and of course, it’s a world premiere.”

Red Badge Variations is part of the Coterie Sparks series, which is for adults, teens, and preteens, says Coterie Producing Artistic Director Jeff Church. “What’s fascinating about this play is that it takes the key soldier personalities found in Red Badge of Courage and instead of the Civil War, the playwright imagines them in Afghanistan today. I’m excited because it’s very rare to see a contemporary play set in today’s war … and of course it is right for the Coterie because soldiers today are so young. Our job is to feature young people in compelling stories. Plus we are thrilled that the National Endowment for the Arts awarded us such lovely grant underwriting to allow this world premiere to happen.”

Two of the actors discuss the play’s impact. Jacob Aaron Cullum plays Henry Fleming, the young man who also happens to carry the same name as the lead character in Red Badge of Courage. The new recruit feels like the odd-man-out after being ordered to fill a vacancy. Cullum’s character essentially talks to the audience through soliloquies and reading from his journal. “The fourth wall is flexible as Henry steps away and gives his thoughts.”

Cullum believes the play is going to be a perfect opener for the Coterie. “It’s a real and relevant story. The Coterie’s mission is to challenge audiences and artists. Red Badge Variations will do that with such a deep story.”

Jake Walker plays Doc Bird, a medic who happens to be a devoted bird watcher who sketches the birds he sees in a journal, hence the nickname. Walker says the bonding through an abbreviated boot camp should foster a connection among the five actors that an audience can see.

“Since we ended the draft and men and women decided to volunteer, we, as private citizens, are very removed from the warriors we send to battle. We can watch the news or not; it is up to us if we engage with what is going on,” Walker says. “This play presents a human face. We are boys putting everything on the line. There are elements of universality where the mirror can be held up. It’s also great that the play is written by a woman. She offers a feminine perspective and guidance to a show filled with testosterone.” He says his friends who have served in the military have come home and he wants to honor them with his performance. “I want to portray that bond that you have my back and I have yours and all the petty differences are set aside.”

Walker, who enjoys the educational and entertainment goals of the Coterie, hopes audience members will read Red Badge of Courage. “There is joy when one form of art inspires a different sort of art.”