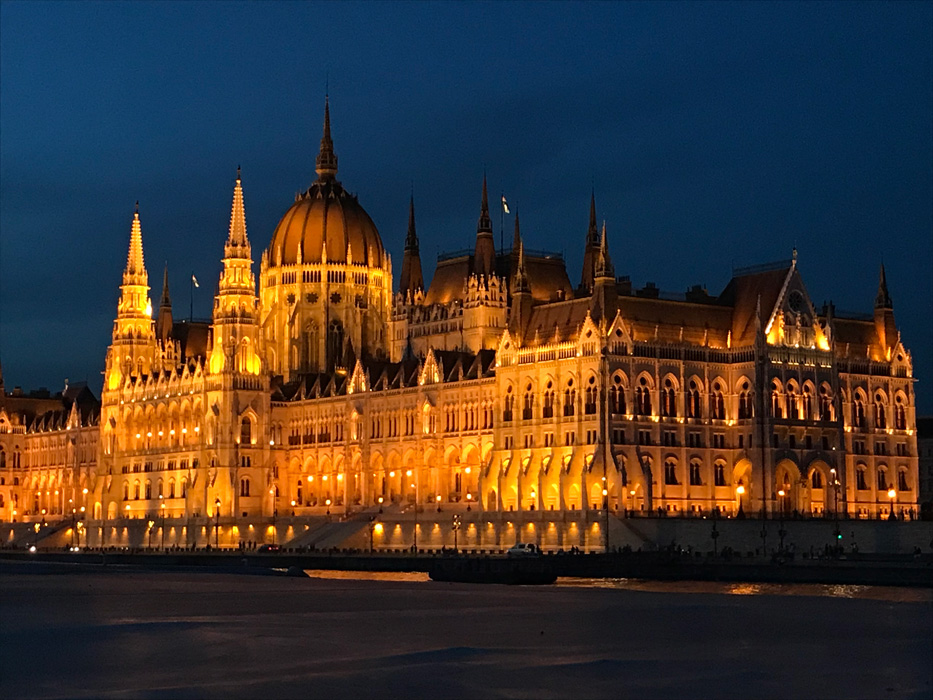 The Parliament building in Budapest, Hungary. All the lights on the bridge and both sides of the river come on at the same time each evening and it is spectacular and breathtaking to see. (photo by Anne Siegel)

In October 2018 a good friend and wonderful travel buddy and I were discussing where we wanted to travel to in 2019. We each did research and then had a get-together to review our finds. The decision was made to take a Viking River Cruise. In all honesty, this was not even on our initial radar, but our research was too appealing not to “jump on board”!

This trip made a huge impact on each of us, as if we were opening a new book that you start reading being totally unaware of where the words will take you. During this journey we were able to enjoy 18 excursions. Like many of our fellow passengers, we made the most of every port we visited. We took advantage of the shore excursions, which enabled us to fully experience and appreciate each destination. Each excursion allowed us the opportunity to see and participate in different cultural experiences.

The pages of the history book continued to come alive while we were surrounded daily by natural beauty, and we became immersed in history, culture and cuisine. Along with our fellow passengers (new friends!) we became awestruck when viewing iconic landmarks, learning more historic tales, taking in some of the unique architecture and enjoying local food and wine. We enjoyed enriching experiences and came home with priceless memories that will last us a lifetime. This trip was a total immersion into European history. While we enjoyed each excursion, we had enough free time to do our own exploring, shopping, resting, etc.

This was a fun and very engaging journey. I maintained a daily journal that became a very valuable tool. Our cruise ship carried only 190 passengers. It was a small, intimate setting and environment. We met some interesting, warm, friendly and very nice people from all over the world. The age range of our fellow passengers was anywhere from late 30s to 90s. Unlike ocean cruises, there is no assigned seating for meals on the river cruise ships. So, with open seating, we took advantage of and had the pleasure of dining with and meeting new people at every meal. And the food and the wine were fabulous!

This was an easy, carefree and most wonderful journey and a memorable experience. And, oh my, did we learn a lot. Starting our trip in Amsterdam, we had no idea they had 75 museums and 30 parks! And, who knew that a family lived in a working windmill in Kinderdijk, Netherlands! There were some afternoons where we did scenic cruising, which enabled us to take in the natural beauty on both sides of the river.

We were awed by the vertical vineyards we saw as we entered Germany. In the Middle Rhine, we were overwhelmed with the number of castles we were able to see and photograph. Germany was our second country and the one where we made the most stops, visiting eight cities. The highlight we experienced in Cologne was touring the Gothic Cathedral. We learned that it took over 600 years to construct, and we took the opportunity to walk up the 509 spiral stairs to the top of the cathedral! The views from the top were breathtaking. Our next stop was Koblenz, which is a lovely area on the confluence of the Rhine and Moselle Rivers called the German Corner. We found Miltenberg to be a charming small town with many half-timbered and gabled houses in pristine condition. We met a 98-year-old woman who made lace, but due to arthritis she is unable to continue. She has no running water in her house, so she collects rainwater and tends to her neighbors’ gardens! We discovered while in Wurzburg that the Bishops’ Residence we toured has the largest fresco ceiling in the world and is one of Germany’s finest baroque palaces. We all know the history of World War II; thus, it was very impactful to tour through Nuremberg. The medieval city walls remain, though 90 percent of the city was destroyed during the war.

As we toured Regensberg, we found that it is one of Europe’s best-preserved medieval cities and the oldest one on the Danube. The town square was known for its Jewish
quarter, which was a bustling marketplace and the site of Nazi book burnings.

We spent a wonderful time in Austria, our third country, and learned a lot about Vienna. In the afternoon we took a tour of their Historic Farmers’ Market with the Viking Chef. What a fun and great experience we had along with some very tasty treats. In the Wachau Valley of Austria we very much enjoyed a “special” excursion with 43 other passengers at a winery tour and tasting. This remarkably small winery supplies Viking with all their “house” wines. Yes, they are excellent. The Melk Abbey was amazing. It is quite an architectural treasure, as it has 365 windows, which is one for each day of the year! Their library is a definite standout, containing 16,000 volumes, and there are an additional 100,000 volumes in 12 more rooms! Yes, the history book continued to come alive! Oh, the things we learned.

Our fourth and final country on our cruise was Hungary. As our ship pulled into Budapest, we were all speechless. Everyone was in awe as this magnificent city with its astounding architecture and history was unfolding right before our eyes. The tour of the Dohaney Street Synagogue was jaw-dropping. It is the largest synagogue in all of Europe and the second-largest one in the world. They have a beautiful garden area where we were awed by all the gravesites and the most incredible metal sculpture of a weeping willow tree, which is something we will never forget.

Budapest lights up in the early evening, and it is truly a sight to behold! From aboard ship, the Parliament building reflects its splendor onto the Danube and into the night sky, along with illuminated bridges and streetlights that sparkle and radiate, making Budapest a “bucket list” visit for travelers.

As we are sure you can tell, this was quite the experience, quite the history lesson and quite an incredible memory. We could go on, but we’ll leave you with this: Yes, my good friend and wonderful travel buddy and I have already booked another cruise with Viking in the summer of 2020! France, here we come! We will get to experience another history book come alive!