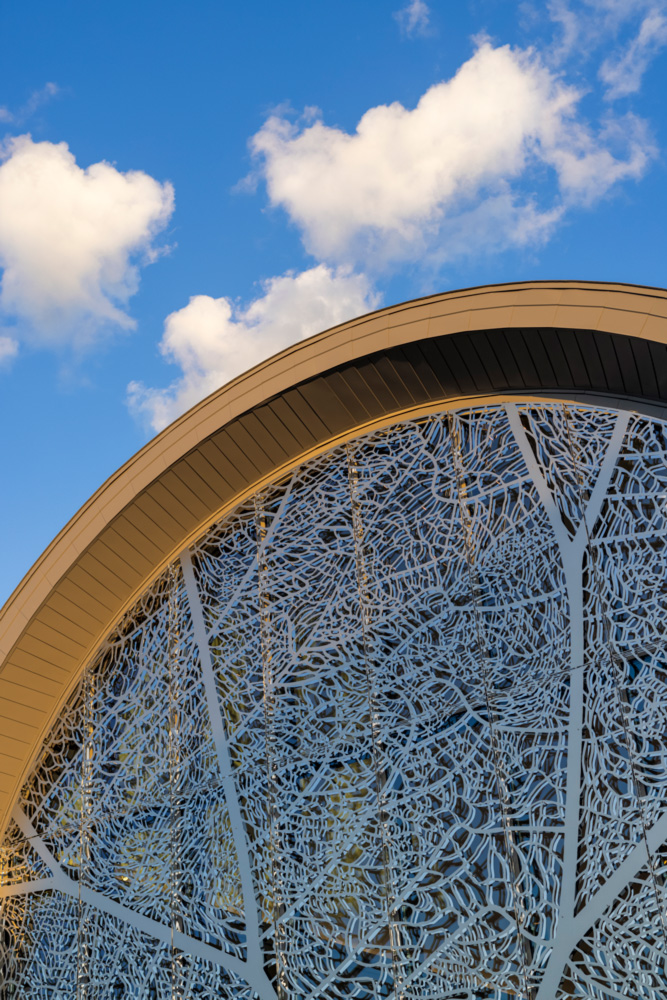 The A. Zahner Company has collaborated with artist Jan Hendrix on an industrial art piece for Pembroke Hill School’s new dining hall. (photo by Jim Barcus)

In the bend where Shawnee Mission Parkway becomes Ward Parkway at State Line, drivers paying close attention will notice some new art just up the hill at the Pembroke Hill School. What looks like a massive, veined silver fan covers a 37-foot-high window. Each end of the school’s new dining hall is similarly graced.

This permanent installation, titled “After Nature,” is the latest art project fabricated by the 125-year-old A. Zahner Company, which since 1995 has helped produce such signature Kansas City artworks as R.M. Fischer’s “Bartle Hall Sky Stations,” the Walter De Maria “One Sun / 34 Moons” at The Nelson-Atkins Museum of Art and the Leo Villareal kinetic light display at the Nerman Museum of Contemporary Art.

The Pembroke artwork only looks like fans. It’s actually two sunscreens, created by Mexico City-based Dutch artist Jan Hendrix on the east and west ends of the school’s dining hall as part of its $52 million “building together” renovation.

The new dining hall was reoriented 90 degrees from its old position and fitted with 37-by-40-foot windows on each end. Head of School Brad Shelley says that the community saw a strong and immediate need for glare mitigation as well as managing heat gain.

Shelley said that the screens have the desired shading effect and “also allow us to bring art into our school, into our community, in ways that we couldn’t even have imagined.”

Hendrix hoped that would happen. Throughout his nearly 50-year career he’s worked a nature theme. The smaller details of whatever landscape he’s focused on have found their way to the fore just as deepening concerns about climate change become more pressing with each natural disaster.

“Our awareness and non-awareness of what is really going on has changed so much, now we’re actually looking at the way more urgent need to do something about it,” Hendrix said. “We have been very good at destroying, now we have to be very good at protecting what we didn’t destroy yet.”

The Pembroke screens are a lotus design, a large plant family, he said, that can grow wild or be methodically cultivated. “It’s like lifting up; it’s like a hand pointing up,” he said of the images.

Zahner and his team achieved the sunscreen effect with two layers of stainless steel — the inner layer is mirror polished and the outer layer is Angel Hair (a Zahner material developed to soften the high reflectivity of standard grain finishes, according to the firm’s website). “It becomes sort of a light box, in a sense,” CEO Bill Zahner explained. “Light passes through the first layer, gets trapped between the two bouncing around, then comes back in. So, you get a multiplying effect.”

He said Hendrix wanted students to feel as if they are inside a plant.

“The art screen has definitely brought on a deep sense of curiosity,” Shelley said, “which I think has been important. The way that I kind of think about it is that our responsibility in education is growth, growth of every member of our community, and the leaf motif just reinforces that.”