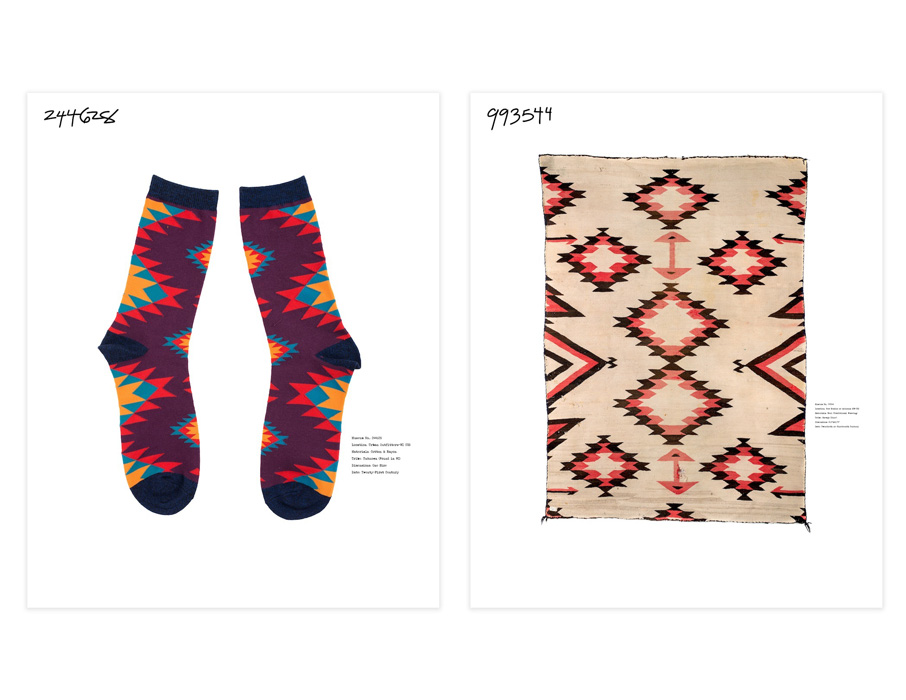 “Back Where They Came From” is an exhilarating exhibit combining craftsmanship with wit, heart and ideas. The objects in this show also express deeply felt reservoirs of pain mixed with pride. Co-curated by Tom Jones of the Ho-Chunk Nation and gallery owner Sherry Leedy, this show of 19 contemporary Native American artists encompasses work that is both provocative and drop-dead gorgeous.

Most of the artists are from the Midwest. Some, like Jones, who teaches art at the University of Wisconsin, and Norman Akers (Osage), an art professor at KU, are well known. Others are young but clearly up and coming. The work of every artist is deeply individualistic, but each stresses the importance of his or her indigenous heritage, whether through the materials used, a specific cultural perspective, or both.

Hoffman is an Iroquois “raised beader” whose works in velvet are in the Smithsonian and other museums. She teaches and speaks throughout North America on raised beading, a practice of creating textured, dimensional designs using various kinds of beads. “Flame Urn,” an oversized scarlet velvet pod-shaped fiberwork with fantastical beadwork, is gasp out-loud beautiful. “Woody,” a wall piece, is about as perfect as beadwork gets. “The pieces (I) produce,” Hoffman writes in her artist statement, “must stand not for the individual, but for our Iroquois way of thinking and looking at the world.”

Equally reverent are the birch bark baskets, containers, vases, and wall works crafted by Pat Kruse and his son Gage. Kruse, who grew up on the Ojibwe reservation in Minnesota, studied the ancient birch bark designs of his tribe at his state historical society, and combines that knowledge with an independent vision of his own. He harvests all his own materials and, like Hoffman, he also teaches what he has learned, ensuring his traditions survive.

Jason Wesaw’s drawings and ceramics are pitch perfect minimalist statements, but the dyed deer tail on the ceramics and his art titles (e.g. “Healing Scars of the Sacred”) connect the contemporary world with that of the Potawatomis  historic past.

The beadwork of Teri Greeves is in notable collections throughout the U.S. and Europe. In her version of a beaded Plains prayer blanket, she writes: “This blanket is my prayer — a prayer for all the Kiowa men and women serving in the Middle East to take their rightful place with the Kiowa warriors that have come before.”

Jason Garcia, who signs his name Okuu Pin/Turtle Mountain, is best known for his clay works. But he’s also an amazing graphic artist, as his print series “Tewa Tales of Suspense!” makes evident. In his seven silkscreens he chronicles the successful Pueblo Revolt of 1680, and effortlessly embodies the stylistic excesses of graphic novels and manga.

In lithographs such as “Uneasy Welcome” and “Alien Conquest,” Norman Akers depicts the faces of famous U.S. politicians popping out of spaceships and flying over historical renditions of Native Americans. These prints are beautiful even as they reference the personal and cultural losses of the indigenous peoples of North America. They also possess a subtle wit, which is true for many of the works in this exhibit.

Marwin Begay’s woodblocks of hawks and herons are wondrously respectful, while John Hitchcock’s depictions of animals in his screen prints take a satirical and political approach. In the delicious “Gathering Rocks,” he juxtaposes three cartoonish coyotes, the ultimate tricksters, with a graphic image of a tank, implying the folly of warfare.

Big Bear grew up on the White Earth reservation, and then lived in Minneapolis where he drove a cab for decades. Although always an artist, creating vibrant, rainbow-colored figurative pencil drawings, after retiring he moved to Duluth and worked increasingly in collage and painting. In 2015 he received the National Artist Fellowship and his art is now in numerous museums, including a mural-sized collage work at the Minneapolis Institute of the Arts. Examples of both his drawings and painted collages are in this show, and as different as they seem at first, disjointed figurations and feverish energy inhabit both styles to bracing effect.

Sarah Sense researches contemporary indigenous cultures, while also investigating their past histories. In the three works here from her “Remember” series, Sense integrates her family’s Choctaw and Chitimacha basket-weave designs in an overlay of bamboo paper that covers images of landscape. These are very subtle works that create more questions than answers.

While Angela Babby’s portraits of her Lakota relations seem more straightforward, her use of media is unique and exacting. She creates glass mosaic tiles, which must be slowly fired in a kiln, and hand cuts and sets the pieces to create her luminous, otherworldly images.

In her sepia-toned digital photographs, McMaster blends images of herself and other family members with those of her ancestors, and the results are mesmerizing.

By contrasting images and designs of historic Native American objects with those of contemporary consumer objects — i.e., a traditional Navajo textile paired with a pair of socks that has a similar pattern — Dakota Mace produces a devastatingly dry critique of the myriad ways in which Native American motifs have been appropriated for profit. (Are you listening, Ralph Lauren?)

The great photographer Tom Jones includes hand-sewn beaded patterns on large-scale photographic images of family members. The picture of his mother is particularly touching. In his 12 part “The North American Landscape” wall work, Jones photographs 12 different plastic trees that represent the different parts of the country where Native Americans used to live. How can one work manage to be so simple, so elegant, and so poignant at the same time?