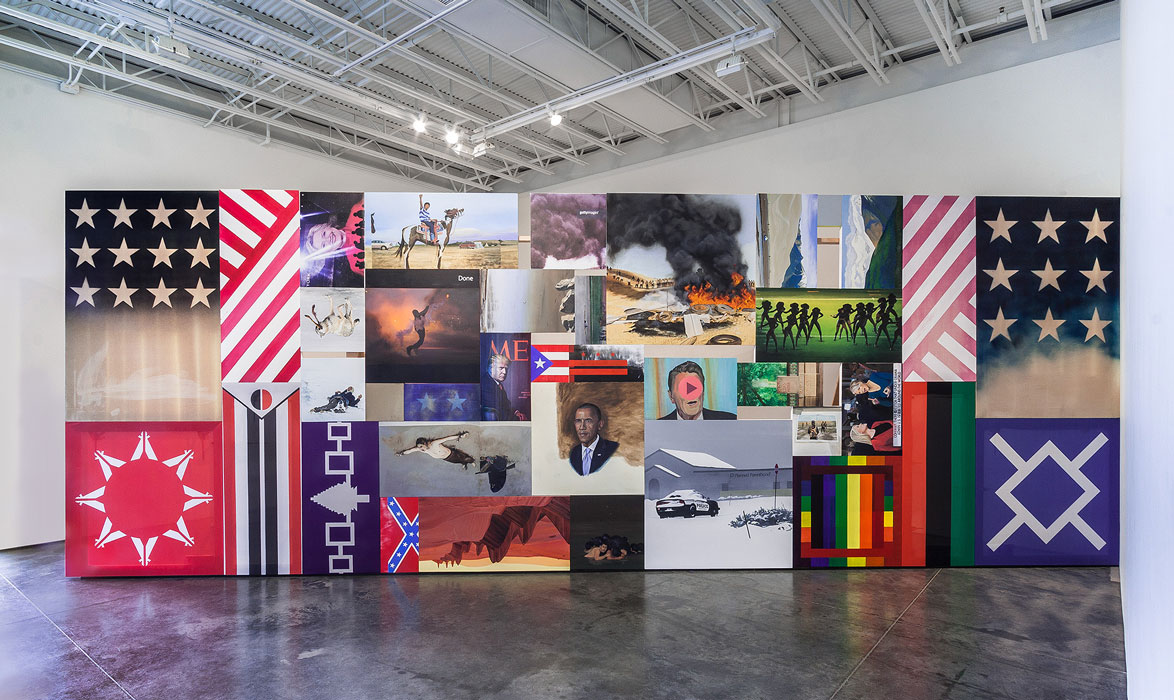 Davin Watne has built a wall. Unlike the stone or concrete of the Great Wall of China or Trump’s proposed wall on the southern border, “Picture the Wall” at Haw Contemporary comprises several stretched flags and paintings depicting recent events in American political culture. No fewer than three presidents and one presidential candidate are present alongside images of Standing Rock, the Baltimore Riots, the killing of Michael Brown, Beyonce’s “Formation” Super Bowl half-time show and a police car outside the Colorado Springs Planned Parenthood building. Mixed into these paintings are stretched flags and paintings of flags, ranging from the Confederate Flag, the current flag of the United States, the flag of Texas, numerous flags of Native American tribes and the Rainbow Flag associated with the LGBT movement.

Looking at the installation, one is immediately reminded of those elaborate TV displays that department stores like to construct, with dozens of televisions stacked on top of each other, each playing its own station or movie. There is deliberate sensory overload as the viewer is bombarded with mostly painful images from the last few years.

There is a subtle, but undeniable left-wing orientation to the imagery. The “Time” magazine Cover of Donald Trump with the “M” of “TIME” subtly positioned over his head like devil’s horns, the emotional desolation of Michael Brown’s corpse, seen from a distance, lying on the street, Hillary Clinton triumphant at the Democratic National Convention accepting her party’s nomination, the juxtaposition of American flags and their imperialist origins alongside indigenous people’s flags, all contribute to a narrative of leftist struggle.

But the wall is not solid. The differently-sized canvases leave little rectangular holes throughout the structure, like arrow slit embrasures in a castle fortification. And while the wall stretches the length of the gallery space, there is room to get around to the other side, where the viewer sees just how tenuous Watne’s wall really is. The entire structure of canvases is held together with clamps and wooden beams and held down by sandbags. The wall is intentionally weak. It would surely be easier to fasten the structure together with screws or nails.

Attached to the back of each canvas is a museum-style, foam-core placard. On the back of an unfinished portrait of Barack Obama, there is a short history lesson on Gilbert Stuart’s unfinished portrait of George Washington — which was used time and again as a basis for posthumous portraits, statues and the image on the dollar bill — which Watne compares to Barack Obama’s unfinished legacy. The symbolism of the Native American flags is explained, element by element, demonstrating the values of those tribes. Some of the paintings, like the chaotic scene of the Baltimore Riots, only come into historical focus once you read the accompanying text.

But the museum-style labels and the work’s overall ideological positioning are counteracted by the intentionally flimsy construction of Watne’s wall. What from the front seems like an undeniable reality, of power and politics, violence and identity, is made historically contingent, as if one were viewing our current political epoch from a million miles away or from a million years in the future.

There is one particular image that stands apart from all of this politico-historical imagery: A wolf with a pair of deer legs sticking out of its mouth. The image is primordial and eternal; it’s a scene that has repeated for millions of years and will likely continue for some time to come.

On the back side, Watne’s museum placard explains that wolves play with the hooves of their prey in order to desensitize themselves to the danger the sharpened hooves represent. Perhaps this is why we, as political animals, subject ourselves to the violence of media images — to harden ourselves against the future.