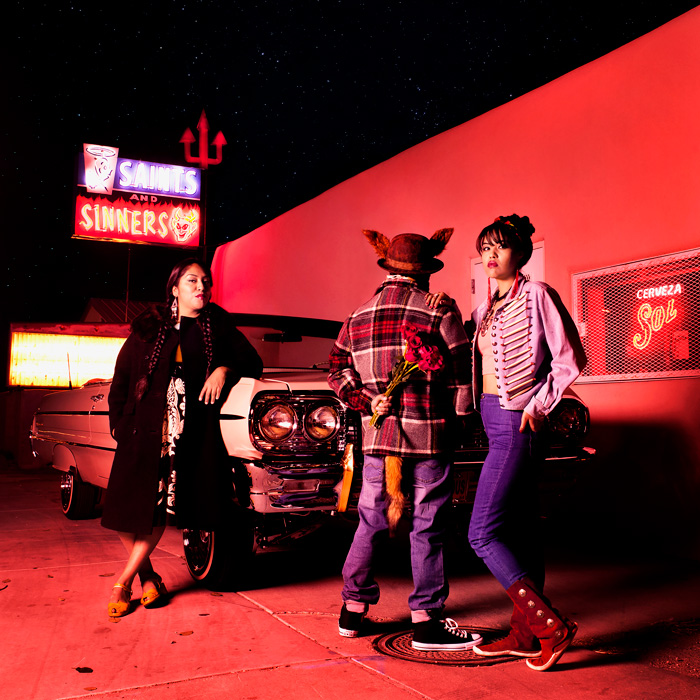 As Johnson County Community College celebrates its 50th Anniversary, it’s fitting for the Nerman Museum of Contemporary Art, founded on campus in 2007, to take stock of its own history of dizzying collecting, built on a campus-wide effort that began 40 years earlier.

“Foresight/Insight” is something of a greatest hits exhibition, and the hits just keep on coming. There are so many remarkable works on display it’s a wonder they can all play along together in one show. With a penchant for the figure, maximalist compositions, explosive color and fearless materiality, there are no dull moments for seasoned or uninitiated visitors alike.

The secret sauce was curating thematic galleries, particularly for the large works, while smaller works are allowed space to breathe on their own. Notably, almost half the pieces are labeled “New to View,” either as recent acquisitions or as earlier ones just now making their debut, adding a real sense of discovery throughout the exhibition.

Two small but curious works greet the visitor at the exhibition entrance: a sepia watercolor study for “The Deposition” by Canadian First Nations artist Kent Monkman and a mixed-media masked portrait by self-taught African American artist Ronald Jackson. Both pieces clue us in that there is much more happening here than meets the eye. The pairing is surprisingly funny and deadly serious at the same time.

Monkman’s campy image draws on the dramatic posing conventions of Renaissance painting cleverly mashed up with a female figure plucked right out of Picasso’s “Guernica.” Not to be outdone, Miss Chief Eagle Testickle, the artist’s drag alter-ego, occupies the center of the composition. Her provocative thigh-high boot thrusts out from beneath her drapery in the sheer agony of a distressed diva.

In Monkman’s world, much like this exhibition, historical time, cultural expression and definitions of identity and place collapse into an open, self-invented playing field of contemporary art.

Faces and figures hold sway in the Oppenheimer Gallery with several all-star works competing for our attention across media. Photography, sculpture, mixed media and powerhouse paintings by the likes of Kehinde Wiley and Katherine Bradford are cast in starring roles, but several other works effectively steal the show.

Jarvis Boyland reveals an intimate interior scene of queer black friendship in “Common House.” The beautifully painted foreground figure — bald, bespectacled, and clad in a green silk robe — engages us directly through his unapologetic gaze. He asks the same question as the knockout paintings in Harold D. Smith Jr.’s concurrent exhibition in the Kansas Focus Gallery, “Can You See Me?”

Ryan Johnson’s life-size paper sculpture “Ghosting” is a humorous portrait of a scruffy white guy after a few too many days of online gaming or maybe a bad breakup. Across a moveable wall Huma Bhabha’s prostrate sculpture jars the nerves with its mysterious figure enclosed in a black garbage bag. Rough clay hands and a turtle tail of clay debris reinforce its position of submission to an unidentified power.

The adjacent Thompson Gallery shifts to works engaging nature and landscape along with a dedicated section of word art. The display also exemplifies the love for local artists apparent throughout “Foresight/Insight.” Misha Kligman’s “The Observer” features a regal falcon on its perch camouflaged in a moody nocturnal palette of blue and burgundy. In “Be A Good Loser” Archie Scott Gobber squeezes and stretches linear letters to surface the hidden forms embedded in typography.

The built environment is the connecting theme of the last ground-floor gallery. The rise and fall of modern architecture, best seen in Angelina Gualdoni’s impressive “Slating in Suspension,” or the crisp color field work in John Ferry’s lonesome “Station No. 4,” remind us of the inherent forces of entropy within utopian endeavors.

“Foresight/Insight” continues in the second floor Mezzanine with a nice blend of large-scale lyrical abstractions. Nick D. Vaccaro and Dan Christensen represent the old school with restrained uses of color and form, while the current generation amps up the color and energy in dense, playful compositions, especially paintings by Eric Sall and Cristina Muniz.

If the idea of a dynamic contemporary art collection on a college campus is to engage students, faculty and the public in a conversation about the art and ideas of our time, then this collection excels at its job. What the exhibition shows is an extraordinary commitment to quality, diversity and artistic inclusion.

Considered overall, it visualizes the contemporary socio-cultural trend toward increasing fluidity of race, gender and sexuality within artistic forms. There is a palpable inversion of the customary art museum hierarchies that favor canonized male artists. Instead, this collection is saturated with alternative narratives that are both accessible and radically human.

“Foresight/Insight: Reflecting on the Museum’s Collection” continues through Oct. 27 at the Nerman Museum of Contemporary Art at Johnson County Community College, 12345 College Blvd., Overland Park. Hours are 10 a.m. to 5 p.m. Tuesday, Friday, Saturday; 10 a.m. to 8 p.m. Wednesday and Thursday; noon to 5 p.m. Sunday. Admission is free. For more information, 913.469.3000 or www.nermanmuseum.org. The museum will hold a closing reception from 6 to 8 p.m. Oct. 24, including artists’ talks by Harold Smith, Jarvis Boyland and Cara Romero at 7 p.m.