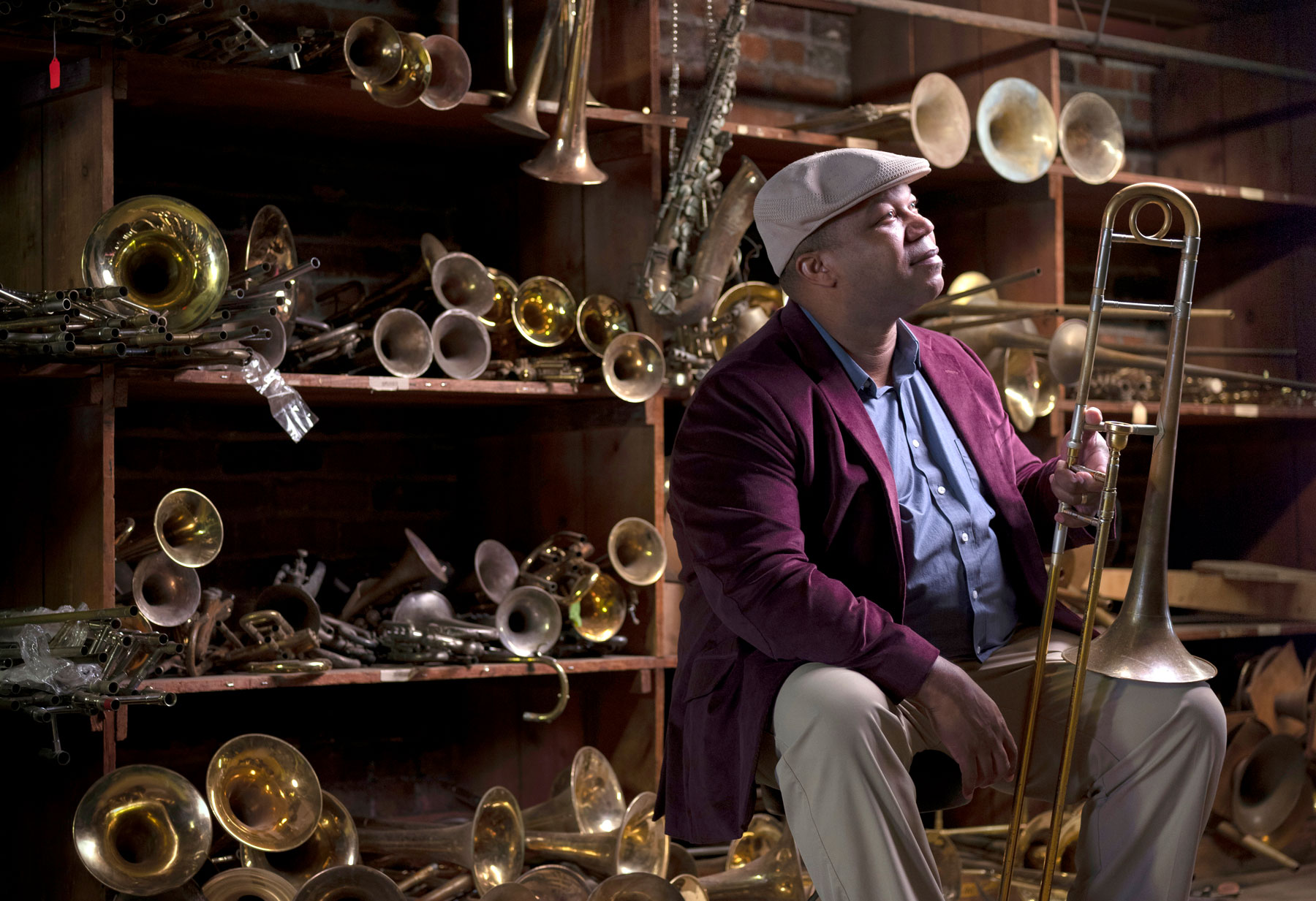 Recipient of a 2018 Charlotte Street Award, the Kansas City Bandleader, Composer and Jazz Trombonist Has Played with the Greats

Whether as a bandleader or as a sideman, jazz trombonist Marcus Lewis has embraced his artistry. And his approach to music has not gone unnoticed.

“It’s been a really cool journey,” said Lewis, who leads his own quartet and big band and has performed alongside top artists including Janelle Monáe, Prince and Aretha Franklin.

Lewis, 40, was born in Augusta, Georgia, and has lived in Kansas City for about six years.

“Kansas City has a great music scene, so it made sense,” he said.

As a sideman, he’s had the opportunity to interact with stars who have proven to be just as relatable off the bandstand as they are in the spotlight. Working for singer and Kansas City, Kansas, native Monáe — who has also acted in films including “Hidden Figures,” “Moonlight” and “Welcome to Marwen” — was “great,” he said.

“I toured with her for eight years, and we traveled all over the world,” Lewis said. “She’s very cool, very focused on her career, but very caring and passionate. And I got to play some really cool venues. My first show with her was at Madison Square Garden in New York, opening up for Prince. I played the (Grammy Awards) with her in 2011, the White House numerous times when President Barack Obama was there, all the TV shows — the list goes on.

“It was just a surreal experience to get to travel, and play music of that magnitude,” he said. Indeed, a musician’s life typically involves racking up a lot of miles, and Lewis is no exception.

“I’ve pretty much been everywhere except for Africa,” he said. “Australia, Japan, all over Europe, all over South America. Just all over. But I definitely want to get to Africa at some point — and also China.”

A life in music came naturally to Lewis: “I really had a passion for it.” And he recalls that he chose his instrument because as a youngster, “the trombones were always at the front of the parade, and I thought that looked cool.” His influences on the trombone include jazz masters J.J. Johnson, Slide Hampton and Curtis Fuller.

“Rehearsals are a lot easier to coordinate with four people, as opposed to 18 people,” Lewis said. “Logistically, things are harder with a big band. With a quartet, you can pretty much play anywhere. But certain venues are too small for a big band.”

Still, working in the larger configuration has its advantages, he said.

“For me, the big band idiom is special because I do a lot of arranging,” Lewis said. “And just the sheer power of a big band, with 18 people playing together, can be a really great effect. There’s just so much more that you can do texturally with a big band.”

Both the quartet and the big band are mostly devoted to his original compositions, Lewis said.

“I rarely play standards,” he said. That said, he takes inspiration from an artist who has been responsible for some of the most popular tunes in the jazz canon: saxophonist Wayne Shorter, who was recently a Kennedy Center honoree and whose compositions include “Footprints,” “Nefertiti” and “Speak No Evil.”

“Wayne Shorter is what I call a true jazz musician,” Lewis said. “His music has evolved over the whole period of his life, and he’s my biggest influence as a composer — period. You know it’s Wayne when you hear it. Compositionally, I think he’s the best, and of course he’s a great soloist.”

Another jazz legend whom Lewis cites as leaving an impression on him is producer-conductor-arranger Quincy Jones, who is much better known these days for his exalted status in the pop world — including his involvement in the making of Michael Jackson’s phenomenal album “Thriller.” Lewis shared the stage with Jones at the Fox Theatre in Atlanta.

“We did a lot of his big-band stuff,” he said. “I walked up to him and shook his hand and said, ‘Mr. Jones, it’s a pleasure to meet you.’ And he said, ‘It’s up to you to keep this five-saxophones-four-trombones-four-trumpets thing going.’”