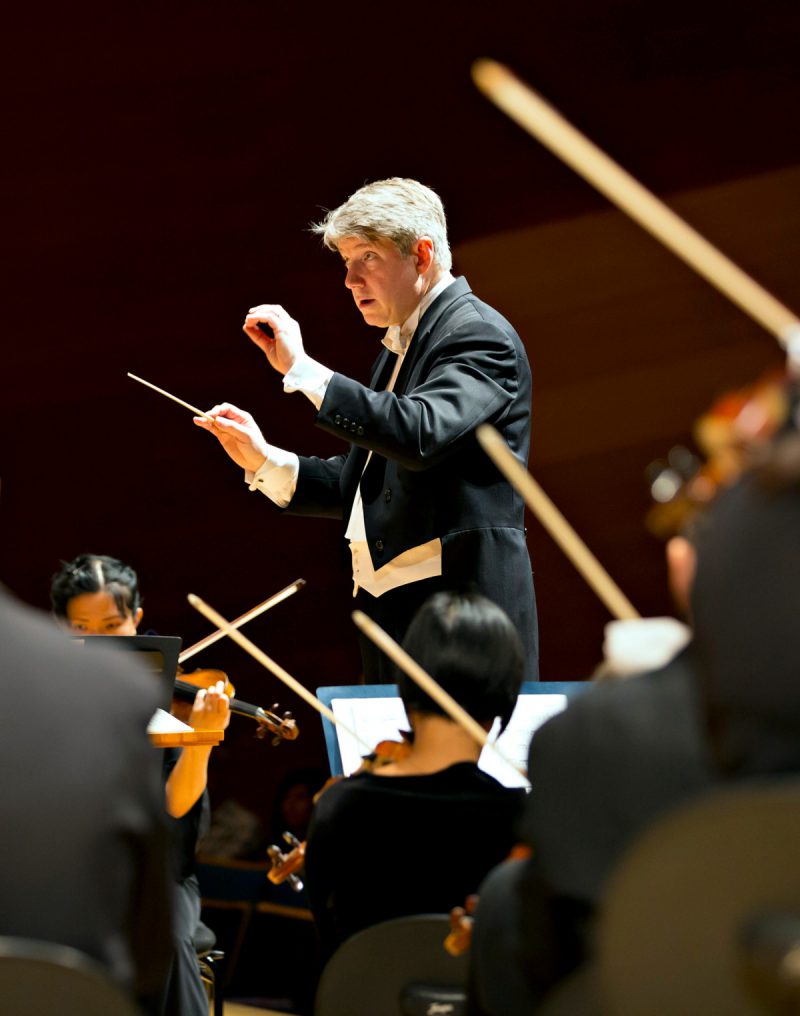 Michael Stern, the Kansas City Symphony’s conductor and music director, is winding down his leadership as the organization begins its search for a new director. (photo by Todd Rosenberg)

The mojo was back when the Kansas City Symphony returned from pandemic limbo to launch its current season back in September. The crowd was somewhat smaller than we’ve been used to in recent years, and everyone was masked, including most of the musicians, save those who had horns or reeds to blow. But the feelings were raw and real. The audience even gave the musicians, who entered on cue, a rousing standing ovation before a single note had been played. Yes, welcome back.

Conductor and music director Michael Stern had dialed up an exceedingly energetic evening. First came a forceful and brief Beethoven overture, then a thoroughly modern and unpredictable new piano concerto by Gabriel Kahane, played by his father, Jeffrey Kahane, and then, after intermission, a rambling and rousing pastiche in Mahler’s First Symphony, known as “Titan.”

No one mentioned the significant period that the Symphony has now entered as Stern winds down his leadership. In the interim, this season and next, audiences will get to watch a parade of guest conductors, some, if not all, of whom are candidates to take over the band and lead it into a long future.

This may well be a generational opportunity, not only for the Kansas City Symphony but for the city as well. As one of the most significant cultural organizations in our area, the Symphony plays an outsize role in leadership, education and community building. Whoever stands on that podium can and should contribute energy and vision to the city’s life, even outside the comforts of Helzberg Hall.

Michael Stern brought much verve and good feeling to the role of music director as the Symphony built on its great fortune to play in a state-of-the-art hall over the last decade. He oversaw an impressive youth movement on stage and generally had the band breathing as one organism, as he liked to put it, rising to the dual challenges of heightened audience expectations and making transformative art. Beyond that — my opinion — I rarely sensed Stern as connected to the wider community in the meaningful way you’d want from a cultural leader and ambassador.

The Symphony board could make a statement by requiring, for one thing, that Stern’s successor take up full-time residence in Kansas City. Sure, there are travel demands and commitments elsewhere, but leading the Kansas City Symphony should involve a much more intimate connection to its city and region, especially in this provocative era of cultural transformation, racial reckoning, and active listening to long overlooked constituencies.

For perspective on the conductor search, I checked in with Roger Oyster, the orchestra’s principal trombonist and one of its most senior members. From a musician’s standpoint, for example, Oyster said, an ideal conductor is one who can both gently guide the players, while also getting out of the way to let them play.

Most of the guest conductors from here on out will be putting their charm and musical skills on display as potential candidates. Betting money (if any) would suggest we keep an eye on next year’s season lineup, not yet announced. Will any of the current guests be invited back? Will there be any guest conductors with more experience, bigger names, or of greater diversity than we’ll be seeing in the current season? For example, only one of this season’s 10 guests is a woman. Skin colors are predominantly white.

In the interim, the Symphony, with its youthful and ambitious force, will continue to impress and inspire, harnessing the energies of the classical tradition and embracing the frequent shocks of the new.

“We are in a great place by any measure,” Oyster told me. “That’s what makes this important hire such an exciting thing.”

A couple of years ago, I reported on an unexpected disruption of our public landscape. The Kenneth Snelson sculpture “Triple Crown,” which anchored the southern tip of Crown Center, had been removed from its mounts and sat on the newly fenced ground along Main Street. A repair was in order, but nothing seemed to be happening for so long. I’m happy to report that the gleaming engineering marvel, one of my favorite pieces of public sculpture in our town, has been restored to its perch. Local metal fabricator Machine Head, working with artist and conservator Philip Stewart of Seattle, who apprenticed under the late sculptor, replaced many parts and were preparing to reinstall the piece in early November.