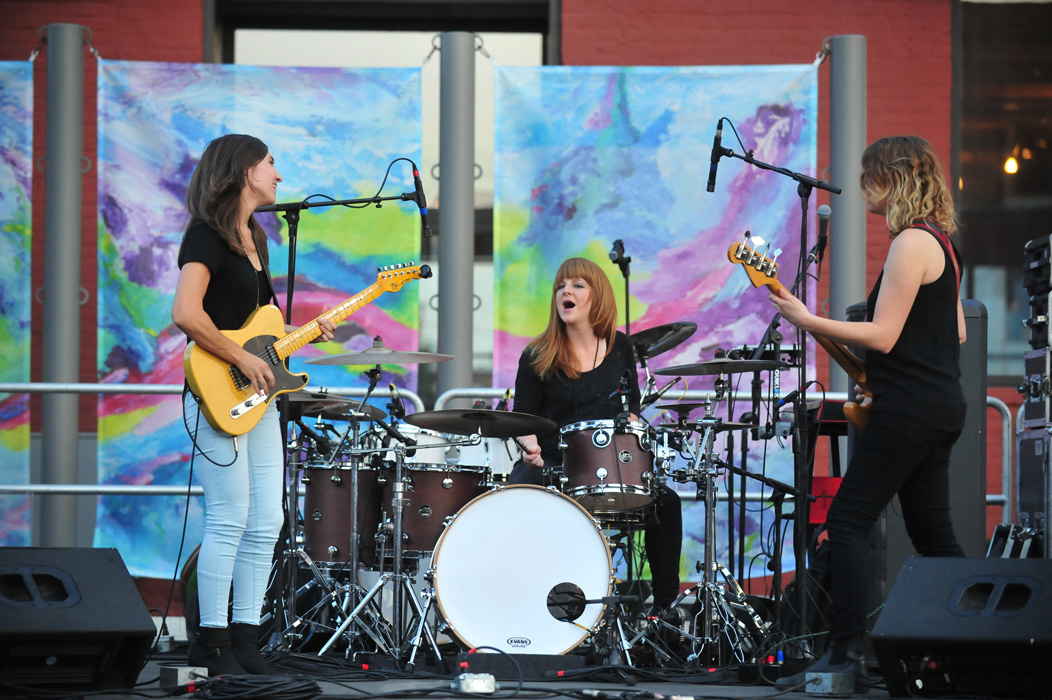 Step into the lobby of Lead Bank in the Crossroads Arts District and your eye will no doubt focus on “Woven Shades of Blue with Gold Triptych Art.”

“A lot of people have supported me throughout the years, since I graduated 10 years ago from the Kansas City Art Institute,” Barrett-Jones said. “I really am grateful for the opportunity Lead Bank gave me, not only encouragement but financial support. That’s a gift — having my artwork in that lobby.”

Barrett-Jones’ creation is emblematic of strong support for the arts on the part of Lead Bank, along with Vice Chairman and CEO Joshua Rowland and his family. (His brother-in-law is Guyon Townsend, publisher of “KC Studio.”)

“Josh Rowland is on our board of trustees and is a tremendous supporter,” said Tony Jones, president of the Kansas City Art Institute (KCAI). “Right from the beginning, Josh said he wanted to be a major player and make a real contribution to the arts scene, particularly in the Crossroads.”

Lead Bank opened its Crossroads branch in October 2015. Since then it has supported the arts community in numerous ways, including:

Rowland “has done everything he possibly can, not just for the Art Institute, but for a lot of people, in making the bank a center for the arts community,” Jones said.

Rowland said Lead Bank’s and his family’s support for the arts took root in the formative years of his mother, Sarah Rowland, Lead Bank’s chair. Sarah Rowland grew up in the north-central Missouri town of Moberly, and Sarah’s mother dutifully drove her to Kansas City and St. Louis for violin lessons.

“That instilled in my mother a sense of the practical and hard work that needs to be done to make a vocation of classical music and fine art,” Rowland said.

The inclination intensified when Sarah and her husband, the late Landon Rowland, moved to Kansas City in the early 1960s. Landon served as a board member and general counsel of the Lyric Opera, and as a KCAI trustee. Sarah was active on the Landmarks Commission and became a university trustee of the Nelson Gallery.

Rowland said he, his brother and sister saw in their parents a passion for the creative mind and a strong belief in supporting the arts.

“I feel like a bank coming into this arts district is a little bit like being a carpetbagger,” he said. “We didn’t want to simply take advantage of work that had been done by great creators in the Crossroads to create a distinctive dynamic community here. We continually work on ways in which a bank can serve the needs of creators and artists and the audience members who love them.”

One such endeavor is Lead Bank’s Community Art Wall. “We commission KCAI students, through the illustration department, to mount very large prints of work that they’ve done,” Rowland said. “They’re displayed for three months and then we rotate them out. We promote that artist, that student, through our social media. We give them opportunities to put that work on their CV. It creates more opportunities for their career as they develop their portfolio.”

Then there was the First Friday block party Lead Bank hosted in October. The bank commissioned Heidi Van, a Kansas City actor, creator and producer of experimental live theater, to serve as impresario.

Lead Bank also sponsors the Kansas City Symphony Happy Hour series at the Kauffman Center for the Performing Arts. “The Happy Hour series exposes a totally different audience to the work of the orchestra,” Rowland said. “The diversity of the audience is truly wonderful to see.”

Looking toward the future, Rowland said Lead Bank will continue to reach out and ask the arts community how it can help. “Our agenda is to be a resource, a partner and an advocate for all the people that we can serve.”