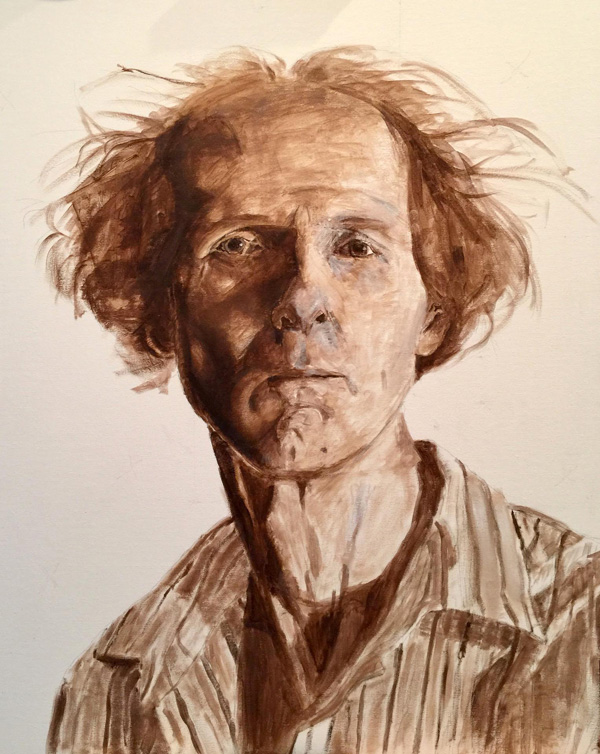 Jam-packed may fairly describe the installation at the small Epsten Gallery. Without much room for the art to breathe, the gallery goer’s experience can feel chaotic and the strength of the individual work may get lost, so, take your time because there is typically a lot to love about Kansas City artists. Curated by art critic Elisabeth Kirsch and artist Mike Lyon, the exhibit includes self-portraits, abstracted portraits, images of people in various guises, in and out of dress, and more, by a diverse roster of talents.

“Portrait of Memory,” Ryan Wilks’ delicate watercolor and collage on paper, comprises two nude male figures that stand and kneel before a sexualized abstract figure. Wilks, a self-taught artist who also does performance art, focuses his work on gender, sexual identity and “the various realities of queer existence.” His drawing and painting style is delicate yet assured and the piece has a compelling dreamlike quality.

Kansas City lawyer Jim Lawrence’s oil paint on canvas, “Witness,” is a straight-on portrait in shades of caramel brown. Because the background is white and the subject presented starkly against this void, there is a sense of isolation and internal struggle. Lips tightly pressed together, the subject seems reluctant to project any inner thoughts. It is a portrait that counter-intuitively reveals nothing of the subject’s interior life.

“They Killed Cornbread,” by Harold Smith, delivers intensity in color, gestures, brushstrokes and the subject’s gaze. Smith’s work is also on view in the exhibition Can You See Me at the Nerman Museum of Contemporary Art through October 27. His gestural, abstract painting style energizes his subjects — Black men — who, he has noted, have become invisible. His portraits often comprise of large, gestural paint strokes against a brilliantly hued background. Here our position is slightly lower than the open-eyed stare of the man in this painting. A figure with an exaggerated derriere accompanies the subject, floating as a solid, dark profile in the background, facing the central figure. The silhouette is a reference to the “Hottentot Venus,” a South African woman exhibited as a freak show attraction in the 19th century due to her large buttocks. Both images emerge from a lime-green ground. The title of the painting is a line from the 1975 film “Cornbread, Earl and Me,” about the police killing of a Black high school basketball star.

Roger Shimomura’s small acrylic on canvas “Muslims and More #2” returns to a familiar theme in his work; that of a detention camp, specifically for Shimomura, the detention camps that imprisoned Japanese-American citizens during WWII. Here the subject’s face is pressed up against the picture plane and two strands of barbed wire cross her face. The painting reminds us that the forced imprisonment of Japanese-Americans during WWII is not ancient history and in this current political climate, we may well wonder, who is next.

Hyeyoung Shin’s “Still,” from her series “Lingers,” is a print-based image on Jiho-gibeop, Korean paper casting, using chrysanthemum prints and antique frames. Here the frame is fragmented and broken, perhaps suggesting the artist’s own grief. By transferring her printed image into sculptural form, the artist makes her memories more tangible. The self-portrait here is similar to ones in her installation work “Unapologetic,” a searing visual representation of her grief after her father’s death.