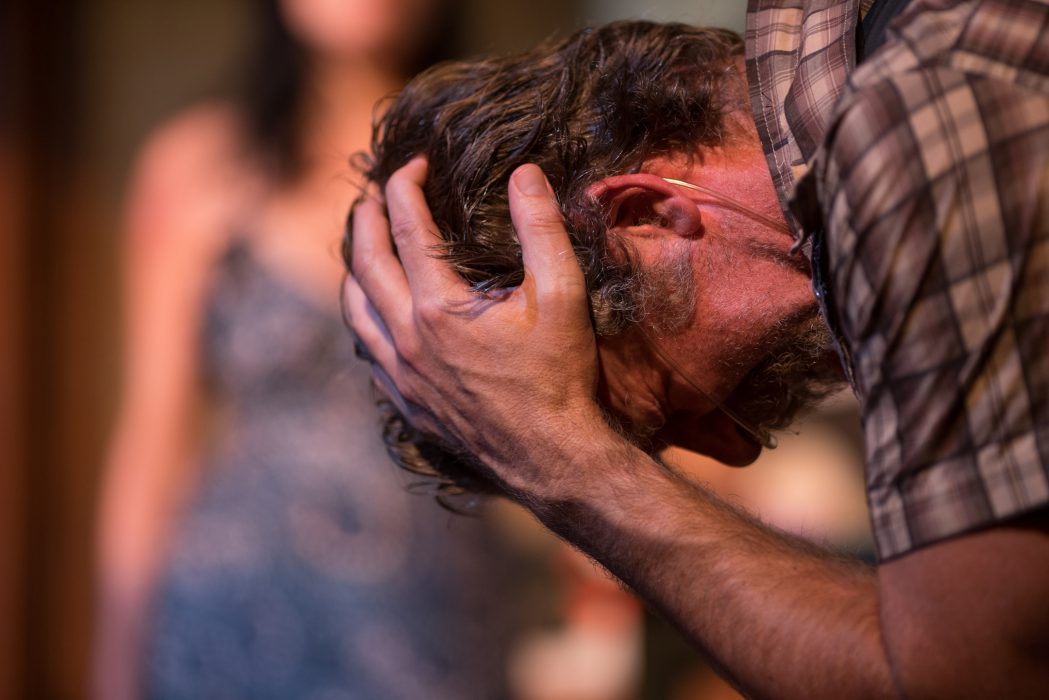 Two-character plays present daunting challenges to both writers and actors, but the genre will be with us forever because of one shining virtue: They’re cheap to produce.

Sharr White’s Annapurna, which opens the Living Room’s seventh season, is soapy character study about two literary academics who, each in his or her way, have abandoned the other. The “why” of their tumultuous history is given so much stage time that their past seems more present than–well, the present. White shoves an encyclopedia of character history into the script’s modest running time.

The play, set in a decrepit trailer somewhere in the Colorado back country, depicts the spontaneous reunion between Ulysses, a sort of cowboy epic poet dying of emphysema and cancer, and his ex-wife Emma, who shows up unexpectedly to prepare him for the imminent visit of their 25-year-old son. This piece invites the description of “dramatic comedy,” because much of the interaction between Emma and Ulysses is as amusing as it is melodramatic.

Director Rusty Sneary casts two of the city’s most appealing actors—Charles Fugate as Ulysses and Vanessa Severo as Emma—to pump life into a script that juxtaposes laughs with pathos. Severo has opportunities to exhibit her formidable comedic skills and Fugate is fun to watch as a crusty curmudgeon who thinks he wants to be left alone.

Their back-stories are messy and complicated. We learn about Emma’s subsequent failed relationships and a husband who has given her fresh bruises on her arms and back. We learn of the hundreds of unanswered letters Ulysses had written to his son, whom he last saw when the boy was five. We learn about his drinking, his smoking. We hear about Emma’s penchant for deceiving herself as well as others. And ultimately we discover that Ulysses has written an epic poem called Annapurna, after the Himalayan mountain range which has claimed the lives of so many climbers — and which he sees as a metaphor for his love for Emma.

Indeed, the strength of this show is its portrayal of love as a mysterious force that defies logic and can bind people together even when overshadowed by distance, animosity and festering resentments. That Emma and Ulysses truly love each other becomes clear as the play trudges to a poignant conclusion.

White’s script uses fleeting nudity as a way to get easy laughs. When Emma arrives, Ulysses is wearing nothing but a soiled apron, which exposes his bare ass as he moves around the trailer. By the same token, mild titillation seems to be the point of having Emma step out of the shower and dress in view of the audience. These moments don’t add much to the play but they certainly get your attention.

Basic credibility problems: Severo simply looks too young to plausibly have a 25-year-old son. And Fugate, who appears to be in good physical shape, moves around the set animatedly, often delivering lines in his booming actor’s voice. His choices run counter to what we’re being told about Ulysses—that he’s a physical wreck not long for this world.

At times Fugate brings the performance down to a convincing level of vulnerability. He’s at his best in those moments. Severo, who seems able to access deep emotions instantly, runs the gamut from explosive to reflective with impressive results.

There are plenty of nits to pick with this show, including the script’s strong points at times disappearing under an avalanche of jokes and clunky exposition. Like so many other plays, this one delivers a Big Reveal, but the revelation isn’t as interesting as the buildup to it.

Even so, what Annapurna has to say about life and love follows you home.