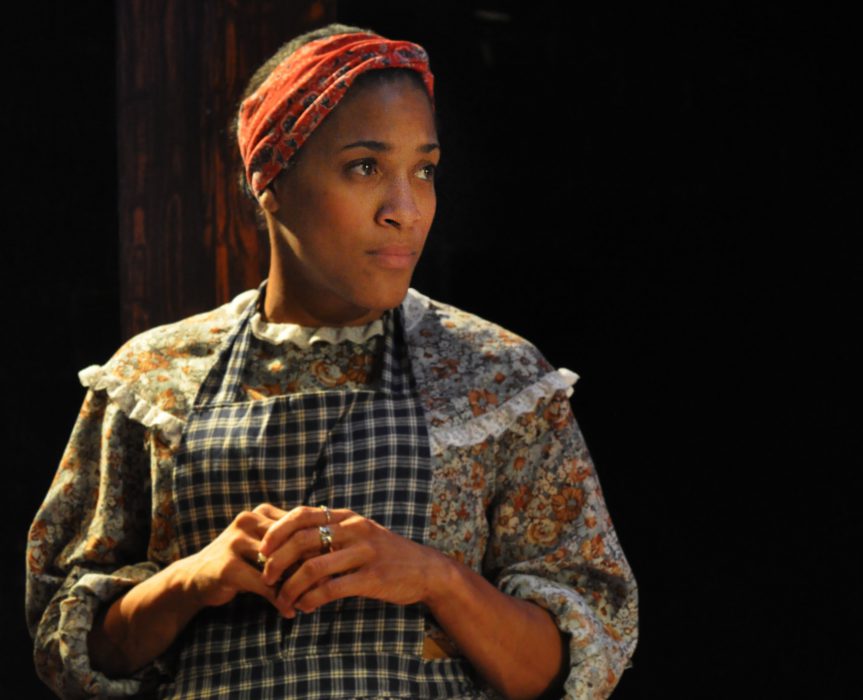 Fine performances — deeply felt, charismatic, Shakespearean — are what you take away from Metropolitan Ensemble Theatre’s affecting production of “Gem of the Ocean,” the ninth drama in August Wilson’s historic cycle of plays depicting African-American life in each decade of the 20th century.

Give Karen Paisley, the MET’s artistic director, credit for staging the first local professional production of this multi-layered drama that explores history, fate, culture and mysticism. It’s a long play but delivers significant rewards, thanks largely to the ensemble of local actors who give themselves to the material with a commitment that is simply inspiring. Indeed, the work from these players transcends some of the play’s structural challenges and this production’s relatively limited resources.

Set in 1904 in the Hill District of Pittsburgh — the locale for nine of Wilson’s plays — this is the one that puts the spiritual healer, Aunt Ester, onstage. She was an important off-stage character in Wilson’s “Two Trains Running,” set in a diner in the 1960s, and in “King Hedley II,” played out in the back yard of three row houses in the 1980s. In “Two Trains” her reported age was 349; in “King Hedley” her death was reported at age 366. In this play, Ester is a mere 285. Wilson implies that her spiritual identity and mystical powers can be transferred from one human vessel to a younger healer, which could explain her phenomenal age.

Sherri Roulette-Mosley, an experienced actress who has been seen often on local stages, inhabits Aunt Ester in this production and the part fits her like a glove. Rarely have I seen a performance so seemingly effortless and so affecting. Roulette-Mosley plays the part with unfailing clarity and simplicity.

Equally vivid is Granvile O’Neal, another veteran performer, who becomes a luminous presence as Solly Two Kings, an aging friend of Aunt Ester’s who peddles dog manure (he calls it “pure”) and makes plans to travel to Alabama to retrieve his sister. Solly, a former conductor on the Underground Railroad and a scout for the Union Army during the Civil War, is filled with fascinating reflections on the war, emancipation and the reality of “freedom” in a segregated country. O’Neal has always been a strong actor but I’ve never seen him this good.

Set in a two-story house, the play depicts Aunt Ester as the matriarch of small group that includes Eli (Priest Hughes), who was a scout with Solly and a fellow Underground Railroad conductor and now takes care of Ester, and Black Mary (Shawna Peña -Downing), a young cook and housekeeper.

An offstage event triggers the action: The suicide by drowning of a man accused of stealing a bucket of nails from the local tin factory. His death and the question of his guilt sets in motion a series of plot developments connected directly to the play’s themes. Wilson weaves complex themes about black identity and the legacy of slavery. And “Gem” offers some of his finest dialogue.

A frequent visitor to the home is Rutherford Selig (George Forbes), a peddler who sells frying pans and other necessities. This is the second appearance by Selig in a Wilson play. The first was “Joe Turner’s Come and Gone,” the Wilson work that bears the closest similarity to “Gem.” Although Wilson never specifies Selig’s ethnicity, his name suggests that he’s Jewish. And in productions of either play, he is almost always portrayed by a white actor. But Paisley chose to cast Forbes, a gifted African-American performer, in this pivotal supporting role. And he’s fabulous. His take on Selig is charming, perpetually amused and deeply empathetic.

An outsider, a young man named Citizen Barlow (Lewis J. Morrow), who has recently come from Alabama to work at the tin factory, is desperate to see Aunt Ester so that she may cleanse his soul. Morrow has a simple, understated acting style but performs with singular intensity in a major sequence in which Aunt Ester guides him to the City of Bones — a metaphorical underwater city made from the bones of slaves who died while crossing the Atlantic.

Another vivid supporting role is Cesar Wilks — Black Mary’s brother — a policeman who sees himself as a sort of enforcer to prevent social chaos within the African American community. Jerron O’Neal plays the role with impressive authority. He has evidently mastered the art of less is more. His performance is straightforward and clear, yet imbued with subtlety.

Hughes, as he usually does, performs with relaxed authority. And Peña -Downing is affecting as a hard-working young woman estranged from her brother — and who may be the future Aunt Ester.

In more than one Wilson play he used a mystical experience to transform a character. And he sometimes allowed characters matter-of-fact spiritual visions. The question persists: What are we theatergoers to make of it? Is Citizen Barlow’s journey to the City of Bones a metaphor or literal experience? Or might it be a rejection by Wilson of Christianity, the “slave religion” imposed on black culture by white overlords?

Let’s just say these questions are worth considering. That’s one way this play sticks with you. The bottom line: This one gets my vote for Wilson’s finest play. He was writing at the height of his powers, and the depth of character and the thematic complexity you encounter in “Gem” is all to rare in theater.