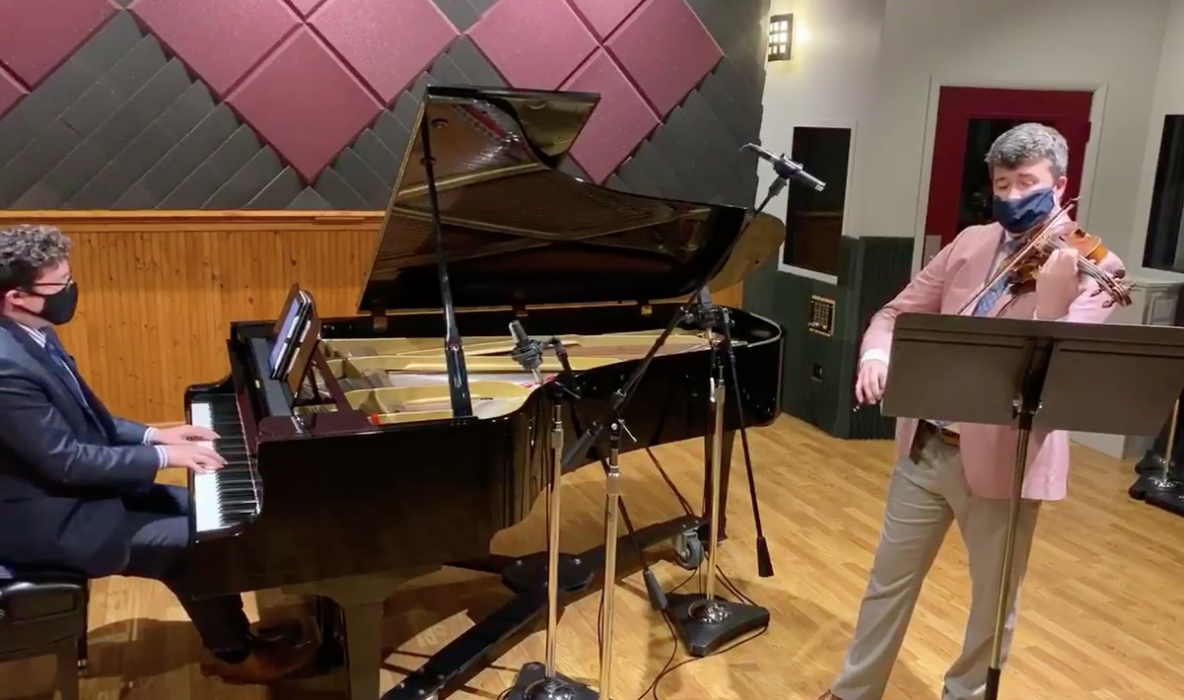 “A Celebration of Women Composers” is one of Midwest Chamber Music’s annual contributions to the Kansas City arts scene, bringing attention to and appreciation for composers historically overlooked. This is their seventh such presentation, honoring the tenacity of women who persevered despite obstacles and the variety of quality music they produced.

Sunday evening’s presentation, as with all of the MCE concerts this season, was livestreamed on Facebook from BRC Studios in Kansas City, KS.  MCE’s musicologist-in-residence Sara McClure served as host for this presentation, offering insight into each selection prior to the performance to place the works in historical context and to give a glimpse into each composer’s life.

For this concert, they selected a series of duo works, intimate chamber works from throughout the last century or so. The first portion featured a variety of shorter works, while the second half focused on a longer form work for cello and piano. As much as possible, the musicians replicated the in-person concert experience, with pauses between works, bows for applause (witnessed here by the comments section), and a brief intermission. The intimacy of the chamber works was enhanced by the in-the-room audio quality via BRC and various camera angles allowed each viewer a virtual front row seat.

Matthew Bennett, violin, and John Livingston, piano, performed two intricate works in satisfying contrast, both by women considered musical prodigies, but whose contributions have lasted long past their childhoods.

Amy Beach, perhaps the godmother of American women composers, wrote her “Romance” for violinist Maud Powell, one of the first Americans–of either sex—to have an international following in the late 19th century, when Europeans considered Americans generally uncultured and American musicians still sought a European ideal. Powell herself was a proponent of underrepresented composers, including those American, women, and black.

Beach’s work, from 1893, is laced with the winding, melodies of the Romantic era, taking the violinist to great heights. Bennett and Livingston performed the work with heartfelt attention, especially the moment when the piano briefly took the melody, the violin soaring overhead.

Lili Boulanger’s “D’un matin de printemps” written during the Great War (1917) has about it a harsher edge, somewhat more aggressive in contrast, though a light tripping figure in the violin melody carries through the work, like blooms appearing in a craggy path. Bennett and Livingston emphasized these swift color changes, making for a lively piece.

MCE music director Steven Lewis performed on horn with Livingston on piano for Jeanine Rueff’s “Cantilène.” This 1963 work was a steady meditation, Livingston’s pulsing rhythm rising and falling in support of the horn’s line, flowing from lyrical to dramatic.

MCE also champions local, living composers, and for this concert, a work by Ingrid Stölzel, graduate of UMKC Conservatory and composition professor at the University of Kansas, though she is originally from Germany.  “here there,” performed by violist Kathryn Hilger and Livingston, on piano, examines relationship and perspective, the musicians sometimes in conversation, sometimes supporting each other, sometimes at odds, the lines twisting around each other with frenzied emotion.

Livingston, performing on every piece of the concert, demonstrated a fine versatility and attention to each of his collaborators.

The concert closed with Croatian Dora Pejačević’s op. 35 Cello Sonata in e minor, from 1913. Eman Chalshotori performed on cello, with Livingston. A vibrant opening movement sets the tone for a lively overall work, while the second movement was more internalized, weaving through a variety of emotions. The third movement seemed both lonesome and defiant, with diminishing descending lines interjected by forceful moments. In the final movement, the cello line travels all over, exploring the range and depth of the instrument, with a delishly big romantic flourish at the finale.

It must be somewhat off putting to perform these intimate works with no audience response, simply for a camera, but the musicians each gave a emotive performances.

Fully integrated concerts, where race and sex are not necessarily defining programmatic factors, should be the goal of every organization, but it’s concerts like these that lead the way for that ideal, introducing and promoting works and composers otherwise left out of the standard canon. Each of these composers have written symphonies, vocal works, piano music and scads of chamber music. Most came from privileged backgrounds, giving them opportunity and stability to pursue their art beyond society’s expectations, but we can’t leave the art form to just the privileged few. It’s concerts like these, which show different facets of what concerts can be, that set the stage for the future.