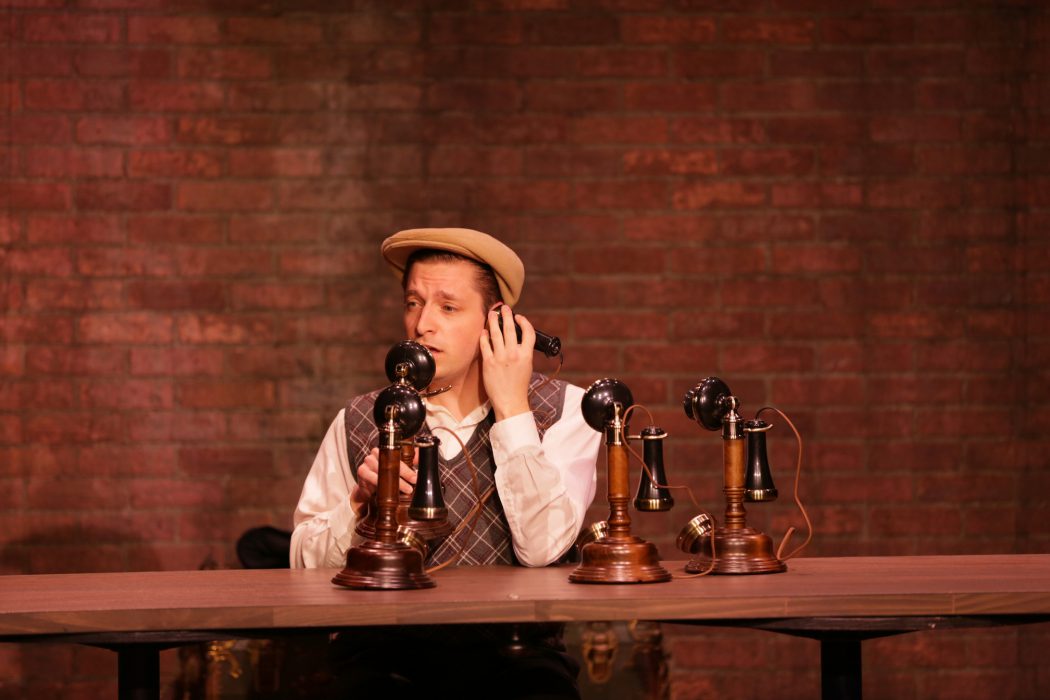 The Living Room steps out its customary role as a producer/presenter of work that challenges, stimulates and poses tough questions with the world premiere of a creative, lightweight musical you could easily picture on the stage of the dinner theater.“The Ballad of Lefty & Crabbe,” written by Ben Auxier, Brian Huther and Seth Macchi, traffics in theater nostalgia as it depicts the evolution of a vaudeville comedy team into movie stars during the silent era. It feels a lot like those showbiz saga films from the 1930s and ‘40s, although the Living Room’s slim budget doesn’t allow for anything approaching a Busby Berkeley dance sequence.

You might dismiss this show as derivative and irrelevant if it weren’t so damned clever. The dialogue is crisp and rhythmic. The songs are seductive and heartfelt. Eccentric characters populate the stage. The script wears its sentimentality on its sleeve but the beguiling performances are so well executed that after a point you no longer care.

Director Rusty Sneary keeps the show moving at a breakneck pace as a cast of eight fills more than 40 roles. Lightning-quick costume changes are part of the fun and minimal props allow for instantaneous scene changes.

The title characters are played by Michael Hudgens (Lefty) and Macchi (Crabbe), a couple of vaudeville entertainers who become a team by accident when an inept stage manager schedules them for the same slot during a performance. But as vaudeville enters its decline with the rising popularity of movies, the pair find themselves with only a nickel between them.

A fast-talking agent (Mike Ott, in one of several indelibly executed comic roles), persuades them to come with him to Hollywood, where he tells them they can be stars in the pictures. Among those they encounter are a brash director (the versatile Josh Gleeson), a sympathetic star (an appealing Elise Poehling), a crazed studio boss (Ellen Kirk in an amusing bit of cross-dressing) and a sultry torch singer (Molly Denninghoff at her sultriest/torchiest best). Co-writer Huther appears in several roles, including Gene, a hapless manager who tries to steer the duo’s fledgling career through the murky waters of the Hollywood shark tank.

Indeed, the depiction of Hollywood politics is inherently satirical and comic. There’s also a semi-serious commentary on the artificiality of film versus the real human connections in live performance. When movies became the dominant popular art form, the show implies, we lost something vital.

On opening night the score was played live on an upright piano by Ryan McCall, who also wrote the arrangements. (He and Eryn Bates will perform at alternating performances.)

Although I couldn’t shake the feeling that I’d seen it all before, the show nevertheless conveyed a freshness that told me that this was anything but a cynical exercise. The writers and actors won me over with the sheer joy of performing and love of theater. And that’s something you can’t fake.

“The Ballad of Lefty & Crabbe” is part of the Living Room’s mission to produce original work by local or expatriate artists. Other theater companies should take note. I suspect this show has a future.