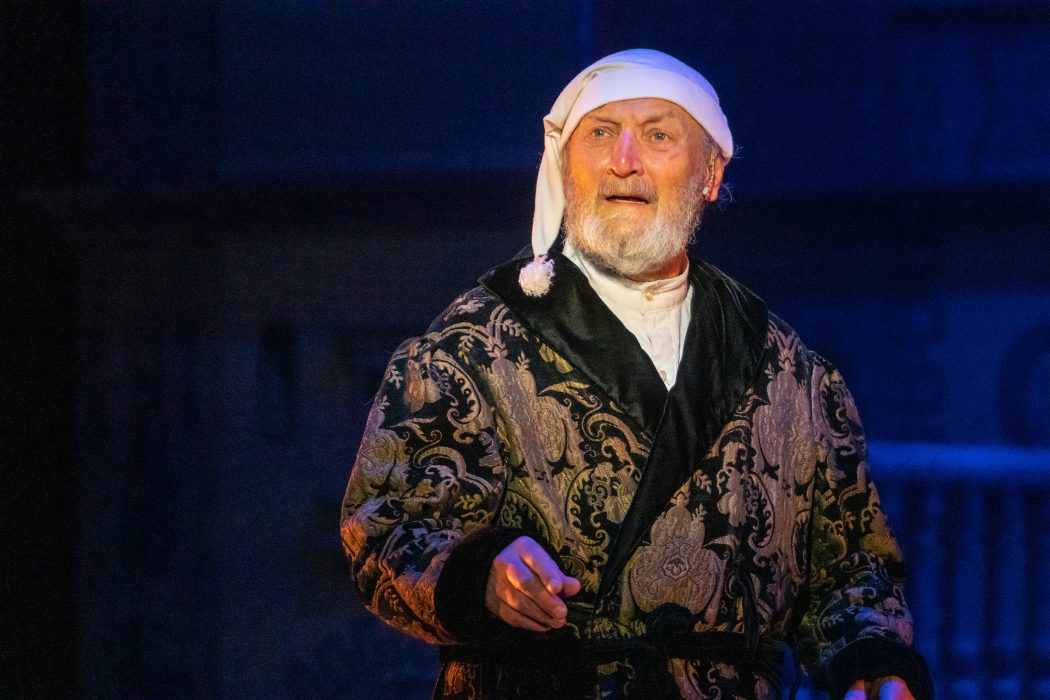 And so once again audiences are invited to bear witness to the spiritual transformation of Ebenezer Scrooge from penny-pinching cynic to warm-hearted benefactor to the poor. And again theatergoers fill virtually every available seat to see Kansas City Repertory Theatre’s annual take on “A Christmas Carol,” the 1843 novella by Charles Dickens, who used his slim book to shine a light on the plight of the working poor.

Kansas City Repertory Theatre has staged a version of  “A Christmas Carol” for 38 seasons — it would have been 39 except for the year the show was moth-balled to accommodate a world-premiere production of the musical “A Christmas Story.”

For most of those years, the Rep utilized a script by Barbara Field written for the Guthrie Theatre in Minneapolis. It was a sturdy adaptation, usually staged with an eye to providing the audience familiar pleasures and recognizable touchstones. Then, for two years, the company shifted to a smart, rather arty adaptation by former artistic director Eric Rosen. Now director Jason Chanos has turned to another version.

This one, by Los Angeles playwright Geoff Elliott, is leaner — so much so that in some parts of the country Elliott’s script has been performed in 90 minutes with no intermission. This production consumes more time that, likely because Chanos has structured it as a two-act show in order to retain some of the moments that Kansas City audiences expect, particularly a stunning candlelight choral rendition of the classic hymn “O Come All Ye Faithful.” Chanos maintains a brisk pace that makes the most of the Rep’s formidable technical resources, including John Ezell’s moving scenery and Emily Stovall’s costumes.

In some ways, this pared-down version seems a bit too compressed at times. For example, Mrs. Fezziwig, again played by Peggy Friesen, has no dialogue. The scenes of Scrooge’s memories, unveiled to him by the Ghost of Christmas Past (Vanessa Severo in a sort of Greek goddess/modern dancer mode), feel rushed. You can argue — I would anyway — that those early scenes need more flesh on them to maximize the dramatic impact of Scrooge’s ultimate transformation.

The cast, headed by Gary Neal Johnson as Scrooge, consists for the most part of “Christmas Carol” veterans. Johnson, chalking up his nineteenth year as Ebenezer and his 37th in the show, slips into the role with measured comic bluster, palpable sadness and, ultimately, unbridled joy. Also in the mix are Walter Coppage as the elegant Storyteller, Victor Raider-Wexler as the blustering ghost of Marley, a boisterous John Rensenhouse doubling as Mr. Fezziwig and Old Joe, a workmanlike Rusty Sneary as Fred (Scrooge’s nephew), Kimberly Horner as Belle, Jake Walker as Bob Cratchit, Yetunde Felix-Ukwu as Mrs. Cratchit, Shanna Jones as the Charwoman and Matt Rapport, doubling as a Solicitor and the Ghost of Christmas Present. In the latter role, Rapport makes a spectacular impression, utilizing his razor sharp comic timing and filling the playhouse with holiday cheer before assuming a convincing somber tone before his exit.

It’s a challenge, considering our current political climate, not to view this show through an ideological lens. After all, Scrooge’s skinflint attitude at the beginning of the show tracks smoothly with certain think tanks and cable-news talking heads who believe that taxation is immoral. A progressive point of view comes from the Ghost of Christmas Past when he shows Scrooge the meager holiday celebration in the Cratchit home and introduces him to the children known only as Ignorance and Want. And, at the end of the day, Scrooge is transformed by a terrifying succession of ghostly nocturnal visits into something like a center-right moderate.

But that’s just me. “A Christmas Carol” on stage is meant to be less timely than timeless. Most viewers will simply sit back and enjoy a feel-good holiday show.

The Kansas City Repertory Theatre production of “A Christmas Carol” runs through Dec. 29 at the Spencer Theatre. Call 816-235-2700 or go to www.kcrep.org.