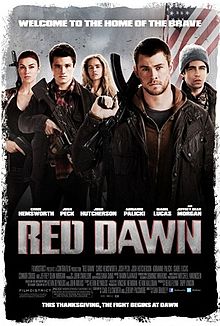 Well, there really is no way to say this without sounding rude so I’m just going to say it … Red Dawn is not good. To be exact … it’s a silly, poorly written, badly acted, easily dismissed mess, that honestly, should have stayed on the shelf that it’s been sitting on. Originally scheduled to be released in 2010, it’s clear, after watching, why the Metro-Goldwyn-Mayer’s company had so many financial issues several years ago.

Basically, the film focuses on a band of teens that fight back when a foreign military force enters and takes over United States soil. In 1984, it was the Soviet Union … in 2012, it’s North Koreans … with some leftover Soviet Union officers. Who knew that Spokane, Washington was so integral to outside forces. Anyway, the enemy invades, half the town is imprisoned in concentration camps while the rest are able to come and go as they please with the opportunity to still eat at a Subway (yeah … apparently North Koreans love to eat fresh) while, not so secretly, our rebel band of teenagers reek havoc in the name of their beloved high school’s mascot – The Wolverines!

Loud, lame and ludicrous, Red Dawn falls short in nearly every category that makes a film worth watching. Nearly. Chris Hemsworth (come on … you know … Thor) as Jed, the older of the two rebel leaders and main characters, is, as always, fantastic to watch. This will be the second film of his that’s been brought back to life after being shelved and his charisma is nearly enough to make the film worth watching. Unfortunately, he’s paired with a younger brother character named Matt, played by Josh Peck who is so irritatingly unwatchable, that he can only be described as a female Kristen Stewart. Completely lacking any other emotion than confusion, Peck mouth-breathes through all his scenes and you can’t help but hope that he gets captured.

The rest of the cast is OK, with Connor Cruise getting some buzz because of his mommy and daddy while Josh Hutcherson (Hunger Games) still proves that if he and Quagmire from Family Guy had a “Whose Jaw is More Impressive Contest,” he would still win. But, for the most part, the rest of the cast is as minimal as they come. It’s pretty clear right away who’s going to make it and who is not so … you know. I will say, my secret crush on Adrianne Palicki (Friday Night Lights) is still as strong as ever, so for me, she can do no wrong and I’m a little biased.

In terms of the rest of the film, while it looks quality, I find it incredibly dumb. Extremely poor dialogue and character choices make it predictable and hypocritical. I have very specific thoughts about the terrorism these teens start to represent but this is seriously not the place to get into it. Feel free to comment if you would like to hear more.

After that, there’s really nothing left to say. I mean … I saw it. Sadly, I’m pretty sure that’s all the rest of the viewing audiences will be left with as well. Rather than having details to share or any real moment to tell friends about, audiences will leave with a sense of emptiness and a barrage of scenes that never really move you to think one way or the other. The movie will end, the lights will come up and they’ll think … man, I should have seen something else.

Never being able to find its focus and being lead astray by a half of the leading duo, Red Dawn is a disappointment in execution and another lesson in why some movies should stay shelved. Sorry Wolverines … you just lost.

2 out 5 School buses randomly driving prisoners around town only to take them right back to the concentration camp where they were being held, making it seem like part of the bad guys scheme to uproot the rebels but doesn’t make sense because the main baddie doesn’t know the importance of one specific prisoner on the bus so why would a main character jeopardize the team if he knew it would probably be easier and safer for everyone to break into the prison instead of waging all out war in the streets where obviously he is outgunned, out-manned and out-flanked at all positions … I mean come on … has he not played any of the Call of Duty games?