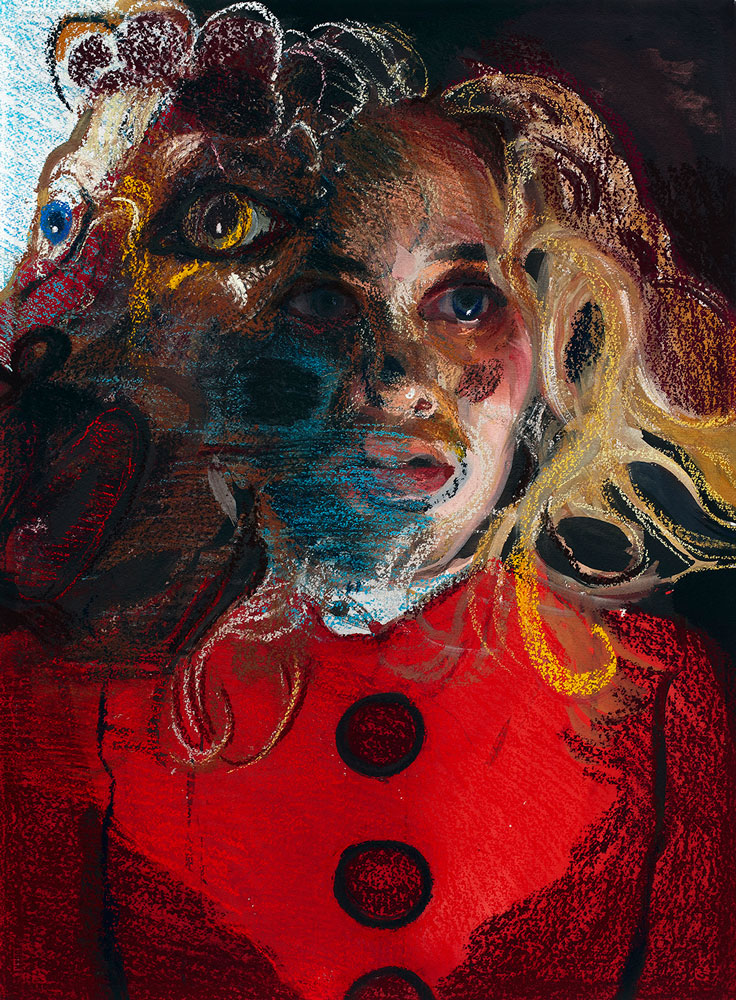 Who was the real Big Bad Wolf, with teeth gleaming, poised to sink into pale young flesh? Why did Sleeping Beauty drift into that deep, anesthetized slumber? Was the ever-gentle Cinderella who graced our childhood TV screens the same one who had birds peck out the eyes of her stepsisters on her wedding day?

New York artist Natalie Frank unearths these classic stories and portrays them in vibrant detail in gouache and chalk pastel drawings. This medium, with its thick lines and vividly popping colors, lays the foundation for Frank’s highly thematic and fantastical pieces — the primary subject being female forms and stories as they appear throughout history. Women are so often tied up and shoved into the boxes of prescriptive roles. Frank unbinds and unpacks these narratives in her exhibition “Unbound” at Kemper Museum of Contemporary Art.

Walking into “Unbound” is like taking a step into some long-lost world. The exhibition space is more than 5,000 square feet. The high, vaulted ceilings are a crisp white. Fantastical, seemingly distant, music fills the space. Passageways separate the various sections of the exhibit, transporting audience members through timelines and stories.

Mounted in partnership with the Madison Museum of Contemporary Art, “Unbound” displays a decade of Frank’s work, and, according to Erin Dziedzic, director of curatorial affairs at Kemper Museum, is the museum’s first major survey focused on drawing. “These four series of complexly layered drawings bring into focus the significance and power of women throughout fairy tales and literature,” Dziedzic said.

Frank has referred to her work as the “unsanitized” version of these tales, in which women are allowed to be fully formed. Beyond the tropes of the mother, vixen or innocent, they are sexual, violent, heroic, vindictive and imaginative.

In addition to the drawing series is an interactive section with an all-ages reading nook featuring Frank’s books as well as other renditions of fairy tales. In the back corner of the gallery, audiences can sit to watch Ballet Austin’s “Grimm Tales,” adapted from Frank’s 2015 book, “Tales of the Brothers Grimm.” This is the source of the fantastical music, composed by Graham Reynolds, which matches the bright yet grotesque drawings they’re inspired by.

Frank’s section on Grimm’s fairy tales strips off Disney sanitation to show the stories in full feral form, which, according to Frank, was never meant for children. These stories were told by and for adult women. “What’s interesting about fairy tales is that they all began as women’s oral and literary tales and were passed down from the generations,” Frank said in an interview with “Her Clique.” “They were ways to talk about the perils of giving birth, which is why there were so many evil stepmothers. And that if a little girl or a young woman went into the woods, having a bad encounter with a huntsman or a wolf was a real probability, and by wolf, of course, they meant a menacing man.”

Before the Grimms, Madame d’Aulnoy coined the term “fairy tale” in the mid-17th century. Her work is both the subject of a section of “Unbound” and of Frank’s book “The Island of Happiness: Tales of Madame d’Aulnoy” (2021). While this section includes lesser-known works, it is no less female-centered, including women cross-dressing and showing desire in a way that highlights their agency. In Madame d’Aulnoy’s earlier version of the story, Cinderella would not marry the prince before first telling her whole history to the kingdom. In an interview with KKFI, Frank explained the prevalence of women using this oral tradition of fairy telling: “It was a way of getting by the censors of the church and state and codes that were acceptable to the society.”

The most recent story in “Unbound” is Story of O, which Frank described as “a contemporary fairy tale.” Story of O tells the story of a sexually submissive woman participating in consensual yet degrading acts, showing that power does not always mean dominance. Power can also be found in open expression and sexual freedom. Story of O is in its own room with floor-to-ceiling custom wallpaper from Flavor Paper and designed by Marian Bantjes.

Frank breathes newness into old, familiar stories of women, transporting her audience to a world that once was, and at the same time, has never been. It is a world where women can be centered in both their alluring and disgusting reality. In an ode to her mentor, Paula Rego, Frank wrote, “From Paula, I learned that drawing could be primary, and that stories that show women as they are — full of complexity, brutality, and grotesque sensuality — were ones that I needed to tell.”