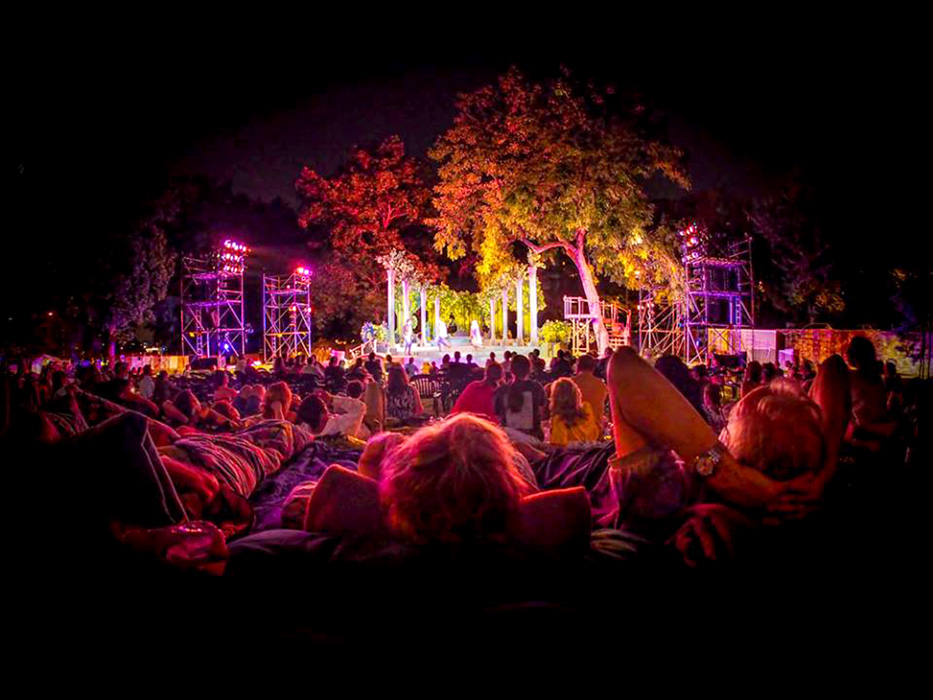 With This Summer’s “Shakespeare in Love,” Heart of Shakespeare Festival Expands Its Mission

Funny what a difference just a few words can make.

Not long ago Sidonie Garrett, executive artistic director of the Heart of America Shakespeare Festival, and the organization’s board of directors agreed to alter the theater company’s mission statement. It marked a major shift. From the festival’s inaugural performance in 1993 to last year, the mission was explicit: To stage only plays written by William Shakespeare.

Now the festival’s mission is a bit more flexible: “To make the works of Shakespeare and Shakespeare-inspired works accessible to a diverse audience through a free, professional, outdoor festival . . .”

Thus, for the first time in its history, the festival will this summer produce a play by someone other than the Bard. The show will be “Shakespeare in Love,” Lee Hall’s stage version of the Oscar-winning screenplay by Marc Norman and Tom Stoppard. The movie, released in 1998, also claimed the Oscar for Best Picture. And Gwyneth Paltrow and Judi Dench won Academy Awards for their performances.

The movie depicted the young Will, who, in the grips of writing the play that would become “Romeo and Juliet,” falls in love with Viola de Lesseps, the daughter of a merchant, who disguises herself as a man to audition for a play at a time when women were barred from the stage. The film also depicted with wry humor the machinations of Elizabethan show business, reflecting cut-throat theater owners competing for audiences that encompassed the entire spectrum of English society — from manual laborers to the aristocracy.

Hall’s play premiered in London in 2014 and has been staged widely in Britain and North America. As in the film, historical figures, aside from Shakespeare, include playwright Christopher Marlowe, theater owner Philip Henslowe, actors Richard Burbage and Will Kempe and, of course, Queen Elizabeth.

Garrett said staging Hall’s play was her idea. And she convinced the festival’s board of directors to change the wording of the festival’s mission statement. By so doing, she gave herself and the organization artistic flexibility. One option, for example, could be pairing “Hamlet” with Tom Stoppard’s “Rosencrantz and Guildenstern Are Dead,” an absurdist play focusing on two minor characters in “Hamlet.” Kansas City Actors Theatre did that very thing a few years ago.

She also envisioned staging “Shakespeare in Love” in repertory with “Romeo and Juliet,” but to do so this year would have been too expensive. Next year, Garrett said, the festival will return to the works of Shakespeare, but she didn’t rule out the possibility of staging two shows in repertory at some point.

“Costs being what they are, that proved not to be the best thing at this particular time,” Garrett said. “But we still wanted to do this play and engage people with something they might feel comfortable with. I remember being charmed by the film. I think it’s a romp. I think some people will find themselves enjoying the bits of Shakespeare within it.”

“Shakespeare in Love” certainly fits the definition of “Shakespeare-inspired.” So would such plays as William Gibson’s “A Cry of Players” and Paula Vogel’s “Desdemona: A Play About a Handkerchief.” And then you have the musicals: “West Side Story” (based on “Romeo and Juliet”), “Kiss Me Kate” (from “Taming of the Shrew”), the Elvis jukebox musical “All Shook Up” (“Twelfth Night”), “The Lion King” (“Hamlet”) and on and on.

As a critic, I regret to report that the revised mission statement will not allow the festival to stage works by Shakespeare’s contemporaries or near-contemporaries. So we won’t be seeing works by Marlowe (“Edward II”), Thomas Kyd (“The Spanish Tragedy”) or John Webster (“The Duchess of Malfi”). Too bad.

Garrett said that founder Marilyn Strauss, who passed away last year, was aware of the plan to alter the mission statement and stage “Shakespeare in Love” and approved it.

Garrett is so upbeat about “Shakespeare in Love” that she chose to extend the festival’s run from three weeks to four. That, as well as having to pay royalties for a play that is decades away from being in the public domain, will make this year’s production a more expensive proposition.

“Knowing it’s been done all over the country by now and having people respond, I feel so positive about it that we’re going to run an extra week,” she said. “We’re adding a fourth week in lieu of doing two shows.”

The cast will be headed by Matt Schwader, last seen at the festival as Laertes in “Hamlet” in 2017, as Shakespeare, and Hillary Clemens, who appeared as Ophelia in the same show, as Viola. (Schwader and Clemens are husband and wife in the real world.) The big supporting cast will include John Rensenhouse, Bruce Roach, Matt Rapport, Todd Lanker, Jan Rogge and Cinnamon Schultz, all festival veterans. Other talented performers include Justin Barron, Ellen Kirk, R.H. Without, Martin Buchanan and Keenan Ramos.

Garrett said her goal is to attract 32,000 people to “Shakespeare in Love.” That would include 10,000 attendees projected during the final week. That goal, if met, would eclipse the festival’s best attendance to date when about 29,000 people came to see the 2017 production of “Hamlet” with Nathan Darrow in the title role. Total attendance since the festival began tops 654,000.

“We’re banking on them enjoying it so much that they’ll come back next year when we do a Shakespeare,” Garrett said.

The Heart of America Shakespeare Festival production of “Shakespeare in Love” runs June 11 through July 7 in Southmoreland Park, just west of the Nelson-Atkins Museum of Art. For more information, 816.531.7728 or www.kcshakes.org.