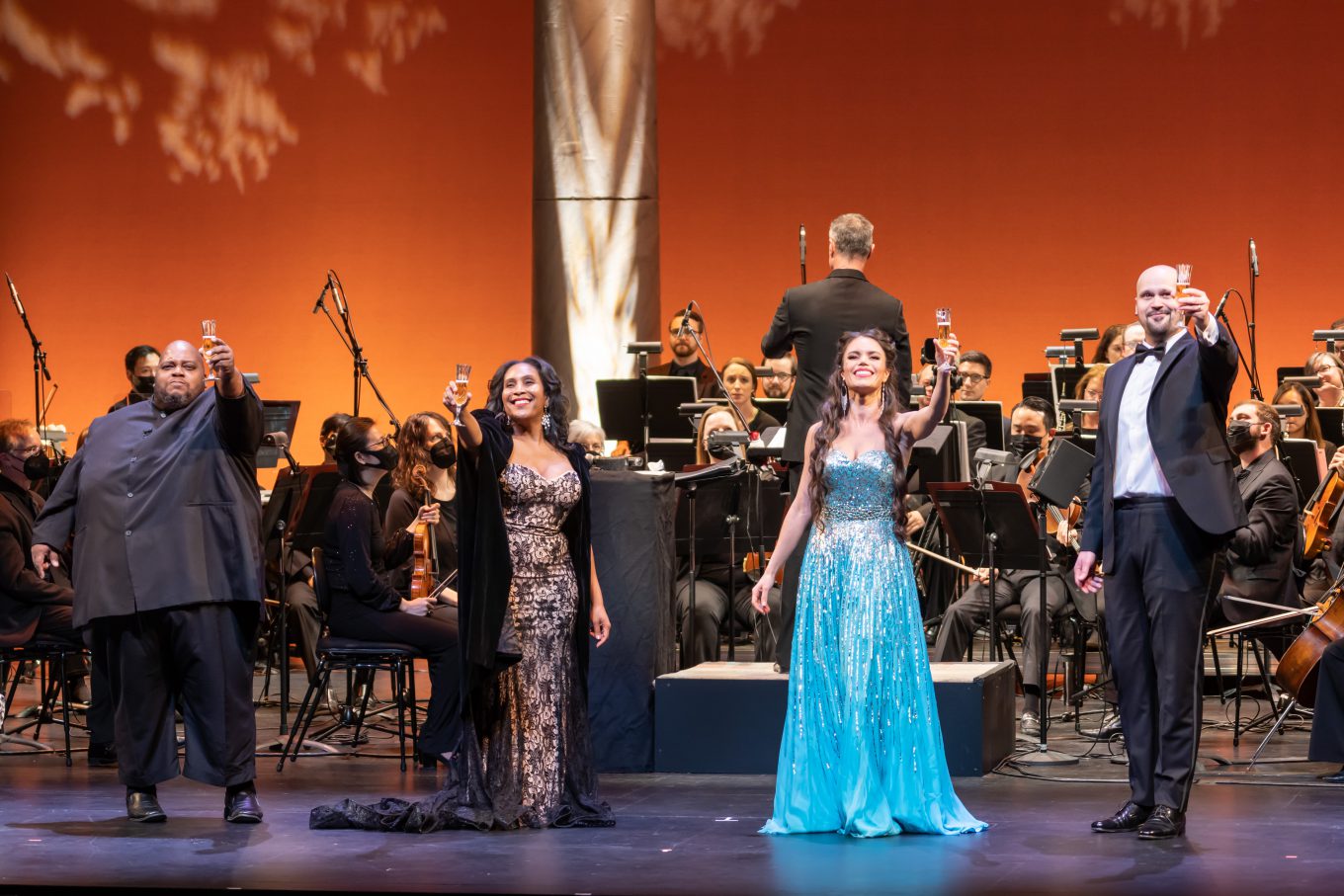 More than any other art form, when you consider bombastic productions and raw emotion, movies and opera come immediately to mind. And if you, like me, have spent a considerable amount of time over the last year or so watching movies in your pajamas, then Lyric Opera of Kansas City’s elegant production “Lyric Opera Goes to Hollywood” was a welcome contrast to the numbing sameness of streaming entertainment.

The majestic display and overwrought emotions of grand opera have often found their way into movie productions, creating subtle (and not so subtle) commentary on characters’ inner lives or providing dramatic backdrop for pivotal scenes. While the significance of the choice might be lost on the average viewer, the emotional impact remains.

The Lyric Opera of Kansas City celebrated these connections for their return-to-the-stage performance in the Muriel Kauffman Theatre with a concert of popular pieces from the golden years of opera, an exemplary display of creativity within constraints in a production of smart, thoughtful choices amidst impressive performances from the soloists.

The 90-minute concert replicated the standard length of a feature film in a fast-paced aria array, mostly centered of love in its many facets. Crystal Manich directed the production, and made excellent use of minimal elements, just a few seats, a table with a vase of roses, and a chaise lounge (because what is more luxurious than a chaise lounge?). Impeccable lighting design, imposing pillars and a glittering chandelier added to the elegance.

When the curtain rose, we had the added treat (and visual interest) of having the Kansas City Symphony on stage, instead of in the bowels of the orchestra pit. Conductor David Charles Abell, a frequent Lyric collaborator, deftly led the symphony with taut, contained gestures, perhaps honed from years of communicating in tight spaces. He also served as the performance’s master of ceremonies.

The concert included 14 works, many standards of recital repertoire and famous on opera stages, and all used to great effect in film. For those new to a Lyric performance, there were nevertheless melodies and musical moments that transcend the stage into popular culture.

The orchestra opened with the dramatic theme from 20th Century Fox, spotlights flickering across the stage, before launching into Giuseppe Verdi’s overture to “La Forza del Destino.”

Baritone Edward Parks gave a charismatic performance of Gioachino Rossini’s “Largo al factotum” (you know it, the “Figaro, Figaro, Figaro” one). As he began, he turned to the audience with an inviting smile, demonstrating warmth and charm. Not only was he happy to be there, he was pleased we were there, too. This vein of welcoming togetherness carried through the concert so much as to seem like a deliberate stage direction.

In contrast, Limmie Pulliam gave a devastating performance of “Vesti la giubba” from Ruggaro Leoncavallo’s “Pagliacci,” portraying the toxicity of the “show must go on” mentality. This piece felt particularly poignant, a metaphor for how many in the arts have felt throughout the pandemic: vulnerable, overlooked, dismissed…facing financial and emotional precarity, yet expected to provide relief for others’ stressors.

The production tempered that heavy piece (in a mostly lighthearted show) with the comic version from a 1967 commercial for Rice Krispies cereal, somehow sung even better within its ridiculousness. But that could not completely erase the acknowledgement that the pre-pandemic crises facing the arts, and especially opera, have not be solved—or absolved—with the return to the stage.

There was a nice bout of acting during the Habanera, from Georges Bizet’s “Carmen,” featuring the sparkling mezzo-soprano Ginger Costa-Jackson. She performed with a flirty aggression, the men onstage as foil and chorus, in a cute scene, well performed.

Soprano Talise Trevigne was supposed to have joined the Lyric Opera for “The Gershwins’ ‘Porgy & Bess’” in the opera season that never was, but this performance was quite an introduction for local audiences, with “Sempre libera” from Verdi’s “La Traviata.” Her voice had wonderful ease, soaring straight to the heart, and she made a sincere connection with the audience, on both this and her rendition of “Ebben? Ne andrò lontana” from “La Wally.”

Both the men and the women paired up for famous duets, the men performing “Au fond du temple saint” by Bizet and the women in “Sous le dôme épais” from Léo Delibes’ “Lakmé.” As the last strains of the women’s piece concluded, around the audience you could hear people sighing in response to the loveliness of the performance.

Throughout, the musical performance was high, the stage design and lighting equally thoughtful, with effective changes between pieces allowing a relatively simple approach to maintain the element of grand opera. There were also nice touches of continuity in the production, like when one singer dropped a rose before walking off, and the next picked it up.

We only had all four singers on stage for the Toreador Song from “Carmen,” featuring Parks, and for the evening’s encore, the drinking song from “La Traviata.” In this particularly jovial piece, the cast came together, champagne in hand, to celebrate the successful collaboration.

Prior to the encore, however, came a pairing of Giacomo Puccini gut-punch arias.

Trevigne performed the ultimate work of faithful waiting: “Un bel di, vedremo” from “Madama Butterfly.” The work conveyed a mixture of hope and anxiety—Butterfly watching the dawn approach, confirmed in her love—which seems all the more relevant today. That contextualization is what keeps us coming back to these pieces, adding layer upon layer to our individual emotional responses. I will never again hear this aria without bringing to mind this performance, as we hopefully near the end of the pandemic, yet in a future and circumstance we cannot foresee.

Of course, no overview of opera could be complete without the genre’s most arguably recognizable work: “Nessun dorma” from “Turandot.” Against a starry backdrop, Pulliam gave the work his all, ramping up the powerful leaps. The piece is nearly a caricature of itself, heard in so many environments, yet seldom fails to captivate, especially in a performance as lush as this.

The orchestra gave a bang-up performance, supporting the singers and showcasing individual talent, including many prominent moments for harp.

Perhaps the most impressive aspect, however, is the way this production demonstrates the creativity and resilience of the art form. In most cases, many decisions about the production, the cast, the presentation were made months ago, when many of society’s challenges where yet unsettled and live performance uncertain. This was an admirable concert, regardless of the situation of its conception, and the successful presentation undoubtedly birthed a few more opera fans.