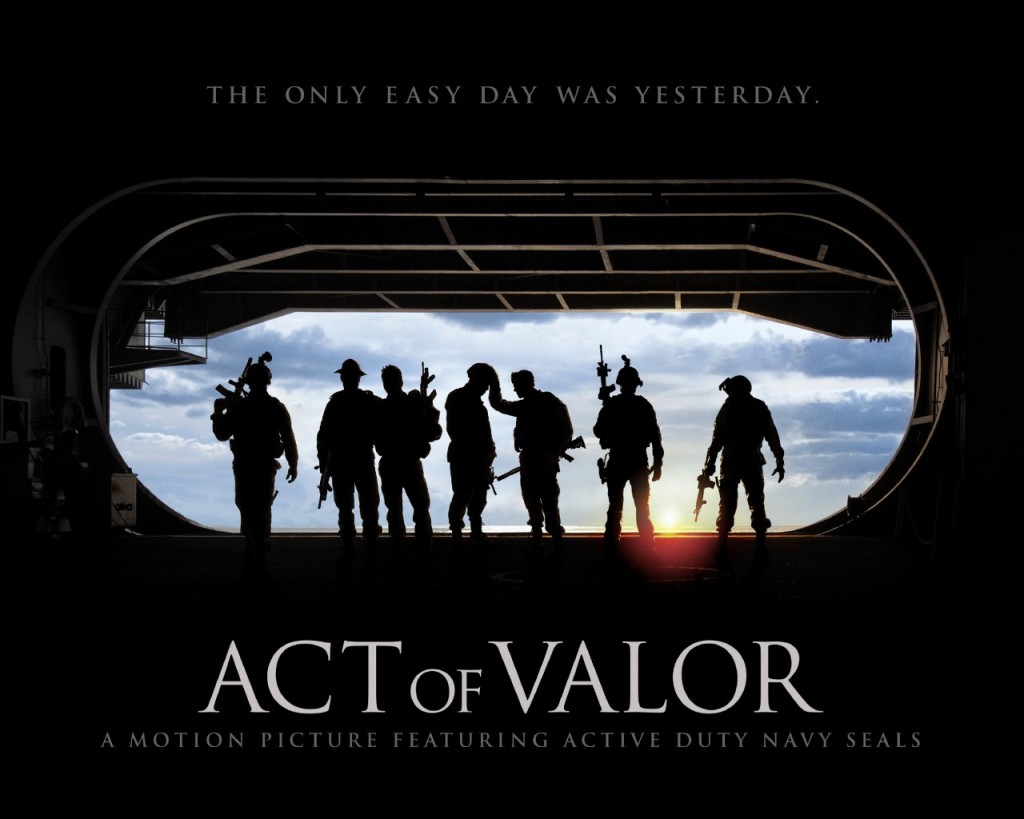 Do you realize how fortunate you really are?  Really, look at your life in America.  Do you know how lucky we are to be alive at this moment in time?  We are free to work our jobs, get married, start a family, complain about our jobs, go on vacation, and hope for retirement all the while we are not to terribly concerned about cars blowing up around us, suicide bombers, or assassination attempts on our lives.  Why do you think that is?  Do you think it is because when we go to sleep at night we rely on the men and women in our armed forces to watch over us and keep us safe?

With the release of “Act of Valor” it is time to see what our armed forces actually do to keep us safe.  Sure, you can say that we have seen it all before in countless military movies ranging from “Platoon” to “Full Metal Jacket” to “The Hurt Locker.”  But “Act of Valor” has accomplished something the other Hollywood tales had not done before – it uses active duty Navy SEALS to play the roles of active duty Navy SEALS.  Smart.

Who’s going to know these characters better than the men that have lived the roles previous to filming? You can take Charlie Sheen and put him in a Navy SEAL role (the 1990 film “Navy Seals”).  But all you will get out of it is Charlie Sheen playing the role of a Navy SEAL.  Using actual men to play these roles has catapulted the audience into the action better than any A-list movie star could do.

We follow a small platoon of Navy SEALS (Seal is an acronym for SEa, Air, Land — a Special Operations force of the Navy). We see this team not as bunch of “Rambo-kill-em-all” wannabes but as fathers and husbands. Men who are down to earth, well educated, and disciplined. The overall quality that they possess is that they are ready to die without a second thought for their country and brothers in arms.

They are called to a mission once a terrible explosion takes place in the Philippines and sets in motion a domino effect of terrorists’ cells around the world.  The missions in the film are based on actual SEAL missions. The team drops deep in a jungle in Costa Rica to rescue a tortured CIA agent.

Keep in mind that during filming that the SEALs are using live ammo for many of the scenes. Crazy? A little bit, but look at the professional men behind the triggers, they do this every day. Also look at the co-directors, Mike McCoy and Scott Waugh, both experienced stuntmen who have worked on a previous Navy documentary. Their resume and the resume of the actual SEAL team speak volumes.

From the jungles the team splits into parts of Africa and Mexico. We see a lot of intense action from these men. Now, much of this action is intended to put the audience in the “boots” of these men. I know what you are going to think when you see the first-person shooter point of view. You are going to think of “Call of Duty” or any other first-person shooter video game on the market.  Go ahead and think that, but also keep in mind that these soldiers have been doing this long before video games and they own the market on that camera angle.

The team goes further down the proverbial terrorist’s rabbit hole tracking down a cell of suicide bombers trying to enter America. It’s not all grunt work for these men, they have a strategy for every move; they are educated men who plan every detail out and don’t go in to a hot zone with guns-a-blazin’ just to see how many bad guys they can kill. They have an objective and they follow through with their plans to the end.

Should you see this movie?  Yes, but don’t see it only for the intense action scenes (which will stay with you after you leave the theater). See it as homage to all the men and women who are laying down their lives in a true act of valor to keep us safe every day.