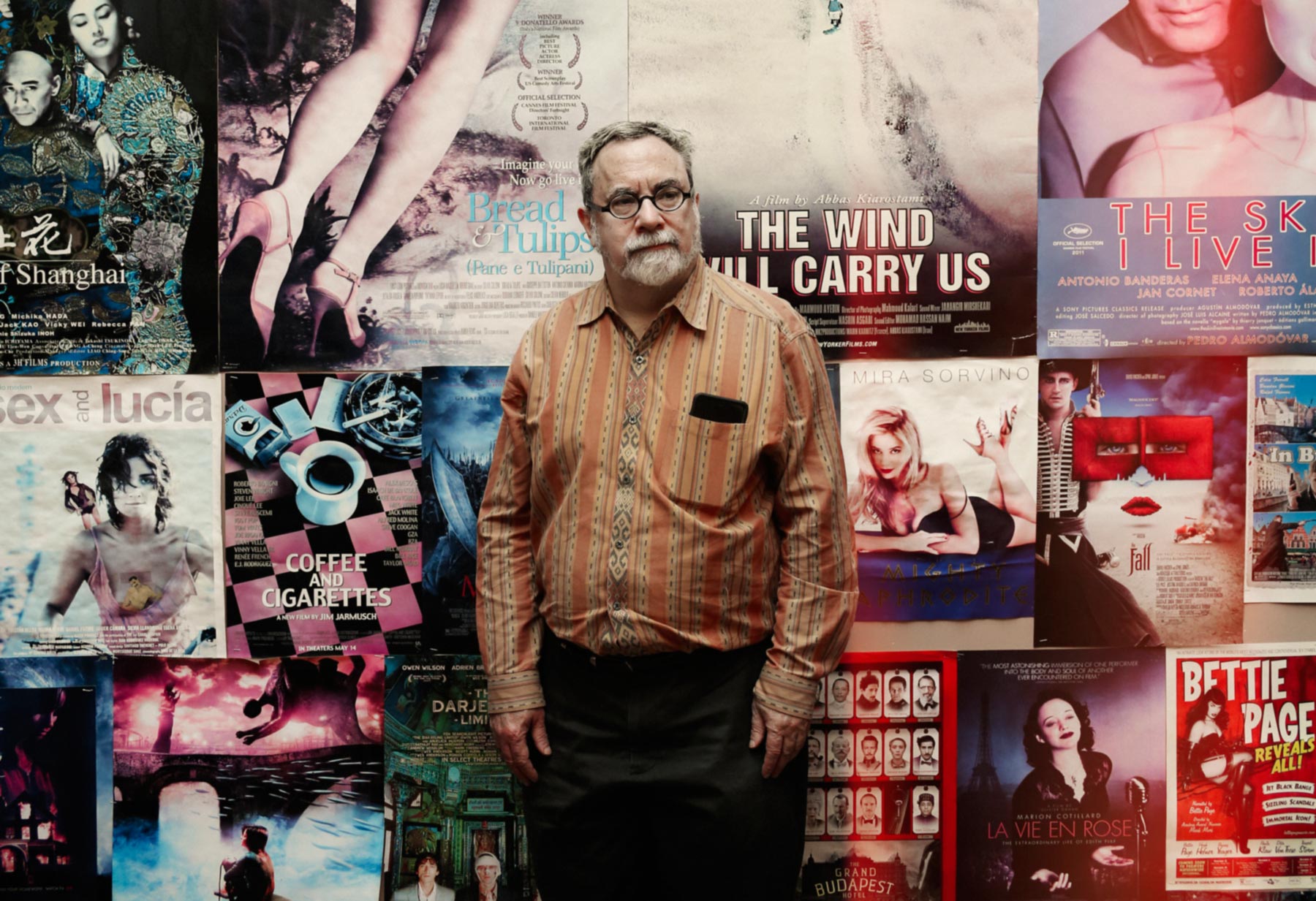 Jerry Harrington at his Tivoli Theatre. Photo by Jim Barcus.

A few months back Tivoli Theatre owner Jerry Harrington ran into a man who once booked films into Harrington’s Westport art film emporium.

The conversation turned to business, and Harrington enumerated the many changes in the industry that were making the survival of independent movie houses an iffy proposition.

According to, The former booker took it all in and then replied with a smile that 25 years ago Harrington was complaining about pretty much the same thing.

The Tivoli — the three-screen miniplex in Manor Square at Westport Road and Pennsylvania  —   is a bit like the Broadway theater. Periodically the pundits predict the imminent death of the “fabulous invalid,” and yet it endures.

“I know I sound like a glass-half-empty person,” Harrington says. “It’s not like I think art theaters will ever completely go away. But we’re always having to change. It’s a struggle.”

Looking back at more than three decades in art film exhibition, Harrington, 63, has seen his business face ever-mounting competition, both from mainstream theater chains that once shunned art films but now actively pursue them, and from technological changes — cable TV, streaming, and cell phones that serve as microscopic movie houses.

And yet for fans of the movies Harrington shows, a trip to the Tivoli is something special, an opportunity to sit in the dark before a big screen and share with similarly adventurous viewers an experience that, at its best, pushes the limits of cinema art.

“There are no sure bets here. I gamble every day.”

“The Tivoli is our cultural home away from home,” Haynie said. “Sometimes we are there three times in a week.”

That kind of widespread affection for Harrington’s operation explains why two years ago, the theater was able to raise $130,000 in a Kickstarter campaign to finance the expensive conversion from 35mm film to digital projection.

“It was amazing,” Harrington says of the 1,500 donors who ponied up for the “Go Digital or Go Dark” campaign. “I didn’t want to go digital. But the industry was no longer making film prints. And I certainly didn’t want to ask people for money.

“What I learned was that people cared — cared more than I had ever guessed. We used to recognize the familiar faces, but because of the campaign we now know their names.

“It happens all the time: A customer comes up and says, ‘Thanks for not closing. Thanks for letting us help you.’

“It’s pretty humbling. Now I want to live up to their trust, to keep the theater going and giving the customers what they expect: An idiosyncratic small business, not just another example of corporate smoothness.”

A Love of Movies

At the root of Harrington’s involvement in the exhibition business is his love of movies.

Growing up in Kansas City, Harrington had little interest in his family’s business, the Muehlebach mortuary. He studied film production at Southern Illinois University and developed an appreciation for films that push the envelope.

In 1981 he became the booker for the 105-seat Bijou, a storefront theater in Westport Square next door to the Jerusalem Cafe. Initially the Bijou offered revivals of classic films, including regular Saturday night screenings of The Rocky Horror Picture Show.

In ’83 Harrington purchased the theater and changed its name to the Tivoli.

By that time the revival business was collapsing because of the arrival of VHS tapes. Harrington decided to concentrate on the films he loved . . . the foreign films, documentaries and American independent titles that weren’t getting played in Kansas City.

“The Tivoli is our cultural home away from home. Sometimes we are there three times in a week.”

One of them became an unexpected sleeper hit.

“Nobody in town had played My Dinner with Andre, Harrington said, referring to Louie Malle’s 1981 film, a long conversation between avant-garde theater director Andre Gregory and actor/playwright Wallace Shawn.

“It had been out for a year, but the distributor was asking too much money for anyone here to book it. But since I knew the distributor, he gave us a deal. We ended up selling out every show for six weeks.

“I realized there were movies you could really make money off of.”

For years Harrington’s business model depended upon locating films flying under the radar of the big exhibition chains but which had the potential to become art house hits.

He developed close relationships with the operators of small distribution companies that handled out-of-the-mainstream films. Harrington also developed a nose for the tastes of his audience.

Not everything cleaned up at the box office — Harrington frequently booked films of dubious commercial value simply because he loved them. But several big hits each year were enough to make up for the duds.
But the industry was changing. Audiences expected the choices that came with megaplexes featuring a half dozen or more auditoriums. Distributors favored theaters with booking flexibility, offering different-sized auditoriums and a variety of show times.

With just one screen the Tivoli could show only one film at a time. It couldn’t offer enough seats. And there was no flexibility.

“I was lucky,” Harrington recalls, “that at just about that time the Manor Square Theatre became available.”

The three-screen Manor Square Theatre, housed in a former bakery just across Westport Road from the Tivoli, opened in 1987. It was originally operated by the local Mid-America Cinema chain and briefly by industry giant, American Multi Cinema, and showed mainstream films.

But it wasn’t working.

“They’d built a three-screener when seven to ten screens were the norm,” Harrington said. “Mainstream audiences weren’t interested, but I thought my audience would be.”

Harrington took over the lease in 1992, closing the old Tivoli and transferring the name to the new facility.  The rest, as they say, is history — albeit a history of challenges for a mom-and-pop movie house.

Luck and smarts
Time was when the big chains like AMC had no interest in art films. Every now and then one of the big boys would announce it was dedicating a certain number of screens to art product, but those experiments invariably were abandoned. Art film audiences, it appeared, preferred to want to watch movies in a non-corporate art film environment.

Frequently Harrington and the city’s other art theaters — especially the theaters run by the Fine Arts Group in Johnson County — would “discover” a sleeper hit. Then, noticing the film’s success in the art houses, the big chains would demand a print of their own.

But at least the art houses got two or three weeks of exclusive showings before the picture went wider.

Increasingly, though, the big chains are cherry picking the most promising art and independent product — films in English with recognizable stars and those that have generated a big buzz on the festival circuit.

“I didn’t get Birdman, even though it was perfect for my audience,” Harrington said of the 2015 winner of the Oscar for best picture. “I couldn’t get Love and Mercy (about the life of Beach Boys founder Brian Wilson) even though I really went after it.

“I did get to show Brooklyn — the multiple-Oscar nominee about an Irish immigrant’s experiences in New York — “but I didn’t know I’d gotten it until the last minute. And even then it was also on 10 other screens around town.”

A major problem for Harrington is that the Cinemark chain’s Palace theater on the Plaza increasingly shows an interest in the same films he wants.

“Some distributors will let both of us have the same film,” he says, “but there’s no point in my playing a movie that you can also see at a theater less than a mile away.

“I’m amazed I get some of the movies I do. When that happens I guess the Palace was booked up.”

With the day long gone when he could tailor his films to his personal tastes and those of his audience, Harrington has been forced to take a more ruthlessly mercantile approach.

“Increasingly it’s just about moving the product through. If it works, great. If it doesn’t, get rid of it and move on. We don’t have the luxury of holding on to a film for several weeks while it builds an audience. If the first weekend’s ticket sales are flat, it’s out of here.”

One thing Harrington prides himself on: He’s never shown a film just for the money.

“I’ve shown my share of clinkers, but I try not to. You may not like every film you see at the Tivoli, but I never want you to leave feeling your intelligence has been insulted.”

In the end, he says, success in the art film biz is as much about luck as smart business moves.

“There are no sure bets here — except maybe Star Wars. I don’t need to go to Vegas. I gamble every day.”