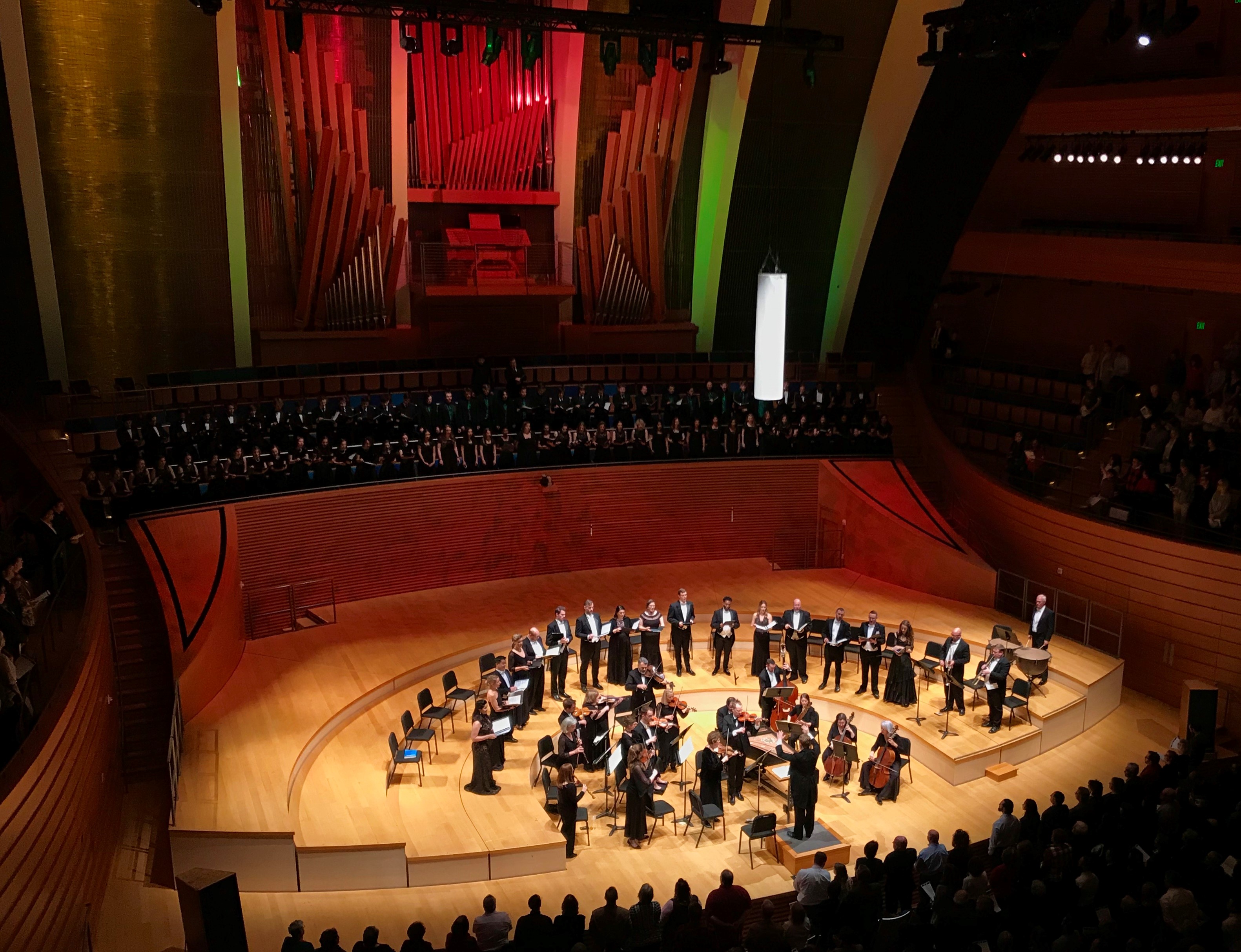 It’s humbling to realize that when George Frederic Handel wrote “The Messiah,” Kansas City didn’t even exist yet. In 1712, as Handel was settling into life in London, no documented European had ever even seen Kaw Point.

Nowadays, the oratorio is such an ingrained part of the Christmas season hereabouts that this gap is difficult to comprehend.

Though Handel’s music had been heard in the United States since before national independence, “The Messiah” received it’s first intact performance—and it’s first Christmas season performance–in Boston in 1818, making this year the 200th anniversary of “The Messiah” in America.

Spire Chamber Ensemble and Baroque Orchestra, for the fifth year in a row, offered its take on the popular tradition with a one-night only performance in Helzberg Hall.

While “Messiahs” have been performed in Kansas City for over one hundred years now, they tend towards the mass choir renditions, with full orchestra. The region even boasts a sing-along version (or two).

In its performance, Spire more closely aligned with how the oratorio was first performed in Dublin in 1742, with 16 vocalists (compared to the original’s 33) and a 19-piece orchestra (compared to 11 players).

The orchestra, on period instruments of strings, oboes, bassoon, trumpets, timpani, and harpsichord, provided a steady foundation and defined presence, the timbres fresh and bright. At the ends of long sections, the tuning would begin to bend and fray, a challenge of the baroque game, but generally the orchestra was firm, consistent and lively, even fiery.

Though the original score came about in 24 days, Handel himself adjusted the work for nearly every performance in his lifetime to suit the needs of the moment, with many subsequent and famous arrangements, so some wiggle room for structure and interpretation is always present.

I think Handel would be well pleased with what Ben Spalding, Spire’s founder and artistic director, has concocted. Clocking in at nearly three hours, this opera-length performance told of the birth, death, and resurrection of Jesus Christ, the work set on Biblical text as selected and arranged by Charles Jennens, a friend, collaborator, and devotee of Handel’s music.

The ensemble gave a powerful performance, dividing the solo parts amongst the members of the chorus, which allowed the audience to enjoy a variety of tone colors, as well as personalizing the immense scope of the oratorio.

Handel presented his performers with two challenges: to sustain each emotive moment and demonstrate virtuosic technique.

Despite its relatively small size, the ensemble balanced impressive output and precision with finely honed skill. The orchestra rarely, if ever, overbalanced the vocalists, and there was a transformative magic when the Baroque ornaments and florid lines melded synchronously in time and tone.

Handel’s writing, with sometimes subtly woven, sometimes blatant text painting, is a marvel of forward motion and intricate detail, as when the lines bounced and scattered to depict “we like sheep have gone astray.” He also balanced contrasting emotional moments, moving from somber to uplifting, taunting to remorseful, excited to reverent, in the work of a moment.

Spire’s performance in these sections was exemplary. “For unto us a child is born” had the urgent excitement of a stage whisper, touching on the rhythms like skipping stones across the pond.

To the 21st century listener, some sections rubbed raw with repetition, yet the singers tasked with these parts gave dramatic and stately performances, such as Jonathan Woody in “He was despiséd and rejected”. When text was a series of rhetorical questions, the soloists delivered them as though demanding answers, like Nacole Palmer in “But who may abide?” and Brian Chu in “Why do the nations so furiously rage together?”

Spalding also reassigned some of the iconic segments, casting them into a different vocal part in an overall successful initiative, including mezzo Melissa Attebury in “Behold, I tell you a mystery,” whose forceful, ringing approach heralded the trumpet solo, performed by Brian Shaw.

Though Spire did things a bit differently, they retained the tradition of standing during the “Hallelujah” chorus: orchestra, audience and all, together with the high school groups situated in the choir loft. Choristers from Shawnee Mission South, Olathe East and Blue Valley North joined in, boosting the impact of the famous anthem.

The orchestra stood again in the final statement, the winding fugal approach to “Amen” a jubilant and triumphant conclusion as Spalding built the crescendo into a rich, ringing, organ-like cadence.

There are many “Messiahs” to choose from during the holiday season, and Spire’s Baroque interpretation—fresh and fiery, grand and grave—was an intimate approach to the perennial celebration.