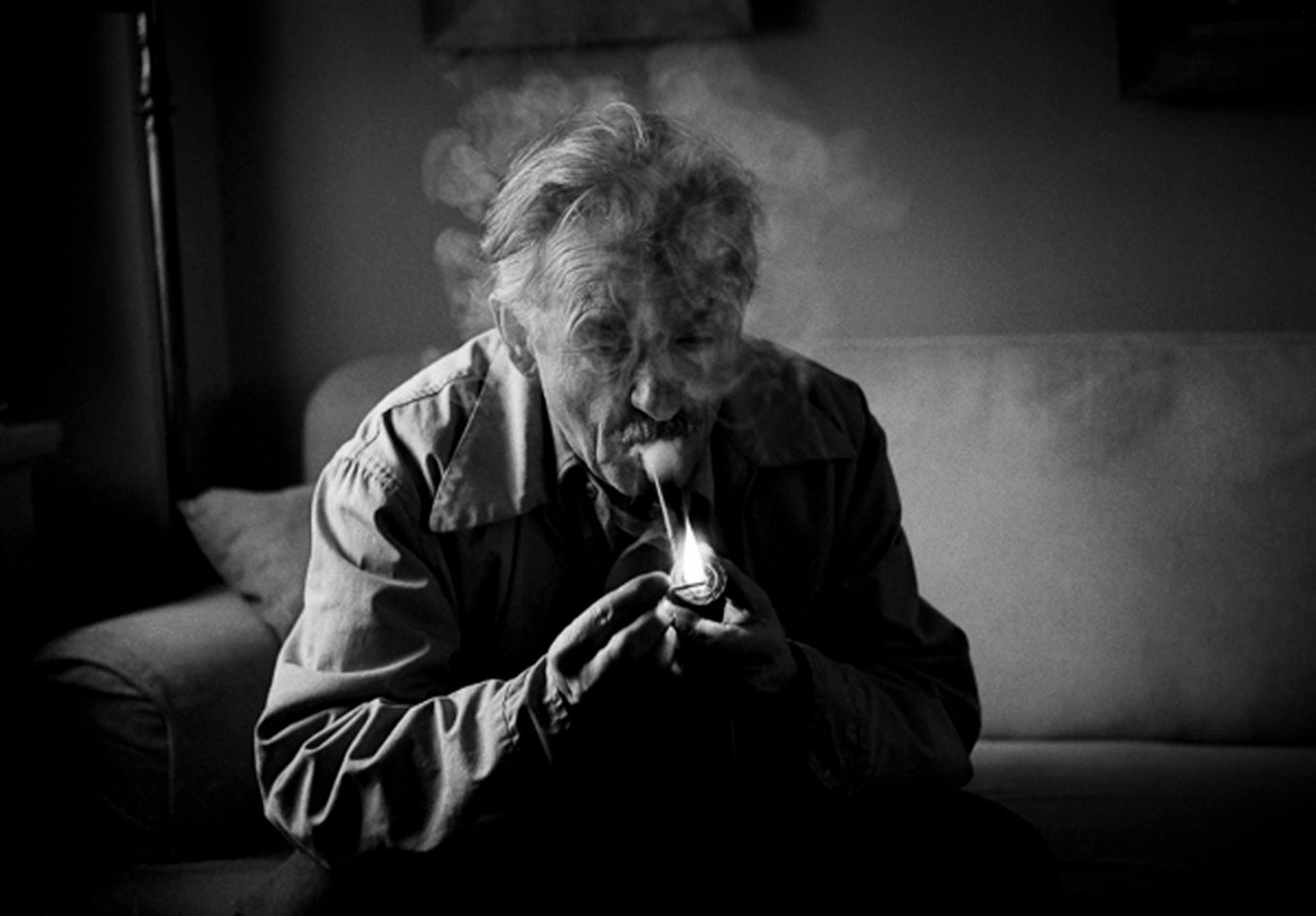 One night in late 2020, as Nick Vedros was leaving the home of his Aunt Myrt and Uncle Michael Mardikes, his aunt suddenly asked him, “What are we going to do with all the negatives?” The noted Kansas City photographer was not sure what his 89-year-old aunt was talking about, until she handed him a notebook filled with more than 1000 negatives chronicling Thomas Hart Benton at home and in his studio. They had been filed away for almost seven decades.

Of the 1,080 photographs Mardikes took, only four had been published in an article he wrote for “This Month in Kansas City” magazine in 1966. The others were never printed, nor was their existence common knowledge. Although Vedros had been aware of his uncle’s assignment with Benton, he was stunned to discover that so much additional material existed.

Vedros, who decided at age 12 to become a photographer himself after seeing his uncle’s work, was determined to organize an exhibition, and was especially interested in doing it as quickly as possible given his uncle’s advanced age and increasing frailty. Collaborating with Dan White, a photographer, master printer and friend since their time together at the University of Missouri journalism school, they selected 34 images to be printed and framed, researching the details with Steve Sitton, the director of the Thomas Hart Benton Home and Studio Historic Site.

Michael Mardikes had had a brief career as a commercial photographer before going on to work in management at the Ford Motor Company and later at UMKC. He made the acquaintance of Benton through Eugene Pyle, a former student of Benton’s and Mardikes’ photography instructor at the Art Institute. In 1955, Benton asked Mardikes to photograph him; Mardikes visited Benton 35 to 40 times, over a period of a few months in late 1955 and early 1956. Sitton told Vedros that not only was Mardikes’ amount of access incredible, but that the resulting body of work was unmatched.

As the project progressed, Benton became focused on a mural commission for the River Club in 1956. Henry Adams, preeminent Benton scholar and former curator at The Nelson-Atkins Museum of Art, provided some context for this particular work: “The commission to paint ‘Traders at Westport Landing’ came at a low point in Benton’s career, 1956, and initiated the late phase of Benton’s mural paintings. It was the first of a series of murals depicting the exploration and settlement of the west, which culminated in the Truman Library mural, which was completed in 1962. All these murals feature trading and friendly contact with the Indians, rather than conflict, and are arresting in their bright color and meticulous rendering of carefully researched detail. The River Club, which commissioned ‘Traders at Westport Landing,’ overlooks the Missouri River and has a panoramic view very similar to the one in Benton’s painting.”

This group of black and white photos not only documents the artist’s working process but also reveals other aspects of his daily life: one memorable image reveals Rita Benton massaging her husband’s stiff shoulders after a long day in his studio. Other images show members of the River Club board visiting Benton’s studio to check on the progress of the mural. One charming image captures a candid moment of Rita Benton and Myrt Mardikes as they collaborated in the Benton kitchen making chicken kapama for their husbands.

In addition to the library’s exhibition of photographs, a 10- and-1/2-minute video directed by Vedros is included in the show. In it, we see Mardikes and his wife poignantly revisit the Benton home after 65 years. The Mardikes family is donating the set of prints currently on view to the library while a second group may be utilized in future exhibitions.

Michael Mardikes died in December 2021 at the age of 94. After the opening of the exhibition a month earlier, the family celebrated at a nearby restaurant. Vedros described his uncle as a stoic type, not given much to showing his emotions. However, that night there was an undeniable look of satisfaction on his face.