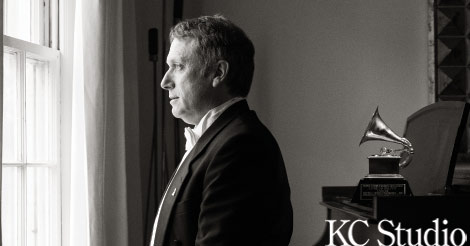 In the classical music world, as well as the world of pop music, a Grammy win is still something to shout from the rooftops. So Artistic Director Charles Bruffy has just that chance with a Grammy win Feb. 10. Bruffy and the Kansas City Chorale received the top honor for Best Chorale Performance for Life & Breath: Choral Works by René Clausen.

The album’s engineers received a Grammy too for Best Classical Engineered Album. Technically, the producers of several classical recordings, which included the Chorale’s performance, won a Grammy as well.

Of course, Bruffy was thrilled with the nomination because they were among the top five classical recordings last year. “Consider how many hundreds of recordings are made on an annual basis; it’s pretty staggering to think that we created a piece that rose to the top,” Bruffy says.

Getting a little giddy, Bruffy wryly smiles when he discusses being mentioned in an article with James Levine, music director of the Metropolitan Opera. “We were described as Grammy veterans. I have been nominated 10 times and I was listed as having a lot of experience in the Grammy world,” he says. “It’s a little bit beyond description when you are nominated with all your heroes. It’s truly the gratifying part that we have worked very hard on our art and we have been recognized with the Grammy nomination. It also means that people have heard our recording and we are one of the best five.”

Released in June 2012, Life & Breath: Choral Works by René Clausen is the first recording by a professional choir to feature Clausen’s works. The album also includes the world premiere recording of Clausen’s Mass for Double Choir.

“René’s music is intimately beautiful and stirring. His Mass for Double Choir will in time join the ranks of favorite choral masterpieces. It was an honor and pleasure to dive into the pages and I’m thrilled with the response we’ve had from people who’ve heard it,” Bruffy says. “The nominations mark one event, the recording, but it’s not the finish line. Truly, we are part of a continuum in our work together. Sure there are zeniths. These high points are treasured. The nominations mean that classical music, specifically choral recordings are alive and viable. The work we do is pertinent.”

The almost 35-year-old recording label, Chandos Records, headquartered in England, could gain a Grammy for the production and engineering. “In a sense, we have gained a seal of approval and the nominations reinforce to Chandos that they took the gamble with the labor and time to make this album and it proves that they made the right investment. They will want to work with us on another album,” Bruffy says. “Sure we have several possibilities for our next recording and I am planning the direction of the chorale.”

The Kansas City Chorale just passed its 30th anniversary last year and Bruffy marked his 25th year as director. “It’s gratifying that we are an American choir presenting the work of an American composer who also happens to be from the Midwest. René Clausen provides music that our choir embraces; we feel at home interpreting his work. We are always looking for the next works that will enrich the Chorale.”

There are parties for the Grammy nominees where the nominees wear medals indicating their status. Bruffy also likes walking the red carpet, smiling for the paparazzi. “No matter what and particularly at times like this, I’m proud to be from Kansas City and to be representing the Kansas City Chorale. I was in good company with fellow nominees Joyce DiDonato (Leawood, Kan.) and Janelle Monáe (Kansas City, Kan.).”

After the fanfare, Bruffy returns to work for the next concert series as the Kansas City Chorale sticks close to its roots with some compositions by Kansas City composer Mark Hayes. The Rock of Ages concert series tours four days around the community: March 9, St. Michael the Archangel; March 10, Visitation Church; March 12, Asbury Methodist Church; and March 17, Liberty United Methodist Church.