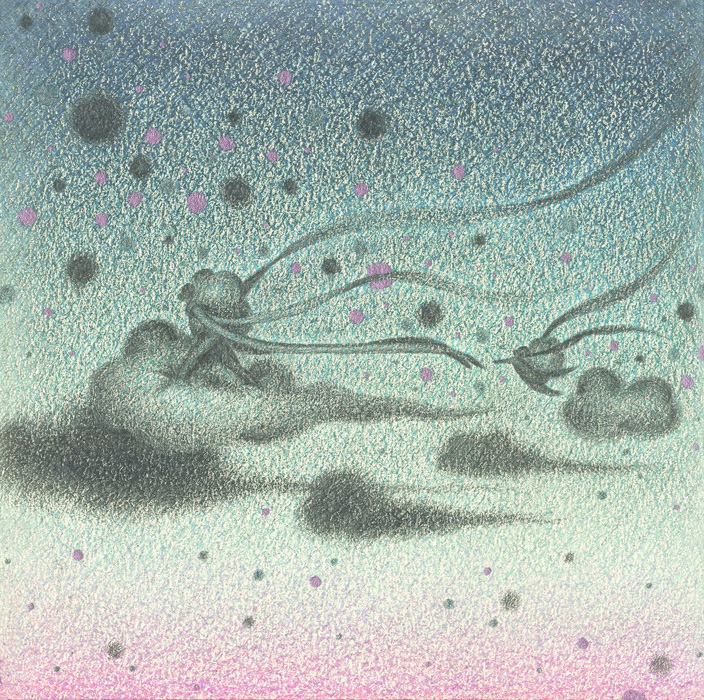 “They’re a way of sucking trauma out of something hurtful,” Ito explained during a recent visit to her studio on the sixth floor of Town Pavilion, where she is part of the Charlotte Street Foundation’s studio residency program.

The fumblys’ bodies are malleable and exist in plushy ecosystems the artist creates especially for them. As seen in her 2018 “float a fall” series, many appear to be floating in space. Yes, it’s escapist, the artist admits, of this “softer, safer world” she depicts.

“Right now, they’re in a happy place,” Ito says, but she has plans to place her fumblys in harsher settings that reflect real-world happenings and the daunting future she sees ahead.

Ito exhibited the “float a fall” series at The Juice Box Gallery in Kansas City, Kansas, in fall 2018.

The fumblys of “float a fall” were preceded by shruggles — pneumatic, often attenuated figural forms including overt references to the human body. Ito describes their demeanor as “sad,” in keeping with their name, a combination of struggle and shrug.

Both the fumblys and the shruggles make their home in the billowy environments of Ito’s “plushscapes” (2018) series, where they can be found sleeping, playing, nestling and embracing amid soft, pastel-colored clouds giving on to views of a technicolor starry firmament.

Born in Kobe, Japan, Ito moved to the U.S. eight years ago to attend the School of the Art Institute of Chicago, where she earned a Bachelor of Fine Arts in printmaking and artists’ books. Last May she completed her Master of Fine Arts in printmaking and drawing at the University of Kansas, where she studied with Yoonmi Nam. It was Nam who encouraged her to apply for a Japanese woodblock residency at the Mokuhanga Innovation Laboratory in Japan.

As seen in the accordian book “tug and wobble” (2017), the residency helped Ito become conversant in lithography and in the use of the mokuhanga technique of woodblock printing, which employs water-based inks in vivid colors.

Ito also experimented with the bokashi technique of hand-applying ink to the woodblock to achieve gradient color. As she explains, “In terms of bokashi (and generally the blending of colors), I like using them for the visual effect of colors moving and also suggesting transitional states/blending of boundaries as well as a sense of time.”

Other influences include the 1960s poster designs Ito encountered during her growing up years in Japan. The psychedelic aesthetic and portrayals of otherworldly creatures in the works of Keiichi Tanaami and Tadanori Yokoo made a lasting impression.

A half century later, Ito addresses a very different social, political and cultural climate. “Looking back to historical tragedies and precedents of mistreatment of each other, I try to make sense of how we can collectively learn to nurture empathy,” she writes in her artist statement. “Through my image making process in drawing, I attempt to understand how personal and collective conflicts arise and the ways in which we learn to cope, mend and forgive each other.”