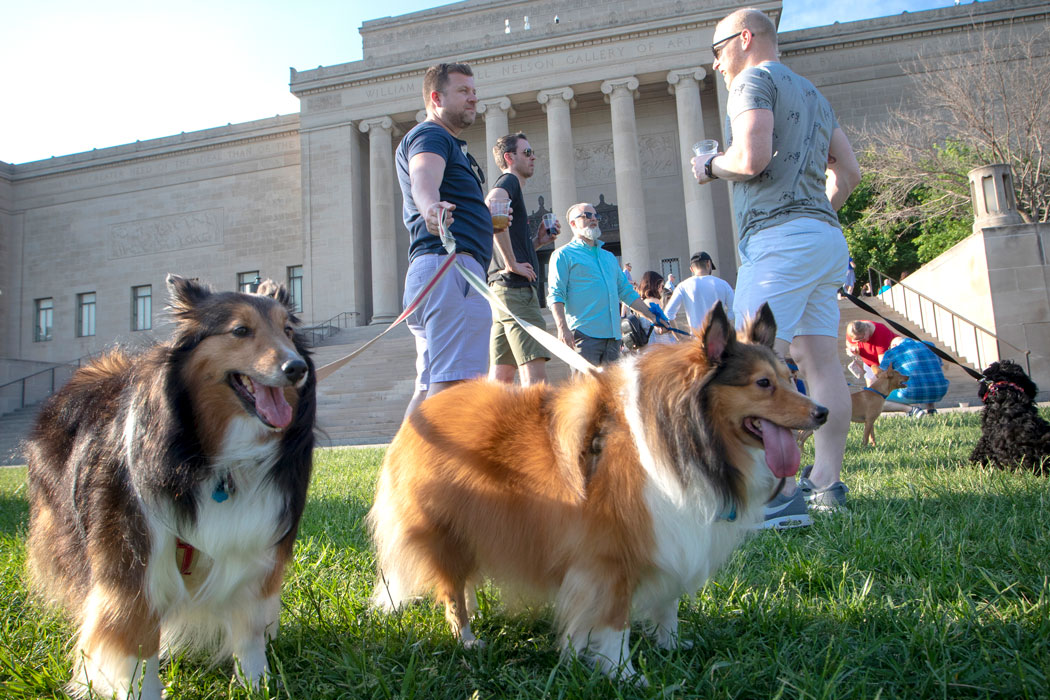 At Galleries and Museums, Pets Lend a Paw in Raising Public Awareness of Fine Art

Have you noticed how pets and other animals are everywhere?

In addition to ubiquitous social media postings about silly pets and media stories extolling the latest sweet, brave or otherwise inspirational animal in the news, critters are helping to market all manner of goods and services these days.

The art world has taken heed. Leave it to your friendly neighborhood gallery or museum to have pets lend a paw in raising public awareness of fine art. After all, understanding a work of art can be daunting. Why not let something warm and fuzzy with a wet nose lead the way?

“A lot of people are intimidated on entering a gallery, because galleries are known for a high snob factor,” says Paul Dorrell, owner of Leopold Gallery in Brookside.

Dorrell’s antidote to potential customer stress is the reassuring presence of his German Shepherd, Bebe, the latest in a succession of three rescue dogs — all Shepherds — which he began bringing to work with him in 2002.

“When you’ve got a sweet dog on the floor who likes to be petted and is running around wagging her tail, almost all people relax immediately,” Dorrell says. “And they spend more time here as a consequence. Therefore, they’re more likely to purchase a work here by a regional artist. And that’s our whole drill.”

Not that Dorrell began bringing rescues to work with sales in mind.

“It’s just a fringe benefit,” he says. “I like having the company and I like the vibe a dog brings to the gallery. I love dogs.”

Dorrell has given Bebe the title “Ambassador of Joy” along with her bio and snapshot on the Leopold Gallery website. And it’s far from the only art gallery or museum that has fetched broad public attention by combining art and animals both onsite and online.

In May, the Nelson-Atkins Museum of Art hosted its Young Friends of Art Puppies & Pints mixer, billed as the “cutest happy hour of the year.” People and their pooches gathered for drinks from local breweries (and licks from water bowls) on the museum’s East Sculpture Terrace. And KC Pet Project made available for adoption a seven-week-old litter of Golden Retriever puppies, each named after a different character of the TV/movie family, “The Brady Bunch.”

“The geese are attracted to all of the lush lawns on campus, particularly when summer starts,” Hartman says. “And some of the wetlands are preserved on campus, so that attracts them too. We just embrace them. Everybody stops their cars when they cross the road. And they do take their time. If anybody honks a horn, the geese just look at them and hiss.”

Regionally, the Crystal Bridges Museum of American Art in Bentonville, Arkansas, cast its pet rescue mascot, Hamish (a.k.a. “the Crystal Bridges Cat”), as the star of its “2017 Happy Holidays” video. A human voice narrates Hamish’s thoughts, as he cavorts through the museum grounds, interacts with visitors and perches on outdoor sculptures.

It’s been a hit, says Beth Bobbitt, the museum’s public relations director, with more than 7,500 people viewing the video on YouTube and another 97,000 seeing it on the museum’s Facebook post.

As a result, Bobbitt said, Hamish “is somewhat of a local celebrity.”

“So much fun,” one judge commented. “The message is that the Museum is for everyone (‘they all smell the same anyway,’ as Hamish says), which is a perfect message of holiday greetings.”

At Leopold Gallery, Dorrell’s son posted a day-in-the-life YouTube video of the gallery’s previous German Shepherd, Moses. Yet there are no plans to likewise elevate current shepherd Bebe’s online profile, although “I’m sure that my staff could create a Facebook page for her and all that stuff,” Dorrell says. “But the truth is we don’t have the time.”

Dorrell sees his job as helping clients “fall in love with what they’re looking at.” But they never need any help falling in love with Bebe.

“She loves gallery openings,” Dorrell says. “You’ve got 150 people on the floor and everybody’s petting her and talking to her. And, of course, she’s tossed the occasional cracker or piece of salmon.”

At Cerbera Gallery in the Crossroads Arts District, owner Philipp Eirich makes fewer physical demands of his elderly Komondor, a breed of Hungarian Sheepdog, named Lili. Still, she makes
an impression on the people who encounter her for the first time in the gallery.

“It’s interesting,” Eirich says. “There are two types of people. The first spots Lili right away and they ask, ‘What type of dog is it? Is she friendly? Can I pet her?’ I reply, ‘Please go ahead and make sure she doesn’t follow you out, because once you start petting her she gets quite attached.’

“The other type of person is really preoccupied with art and they don’t see Lili. Then they almost stumble upon her — she’s just lying down and sleeping most of the time. And they say, ‘Oh, my God, it’s alive. It’s a dog. I thought it was an installation.’ Sometimes I’m sitting behind my desk and counting down from 10 to see when they will actually step on her.”

“She’s just lovely and that’s why people are drawn to her,” he says. “She’s not super active and doesn’t jump up. She’s really laid back, but that’s probably due partly to her arthritis. She just likes to be petted.”

Across the street at Sherry Leedy Contemporary Art in the Crossroads, the Multi-Generational (purebred) Australian Labradoodle known as True Good — or True, for short — is also doted on by dog lovers, including Eirich.

“I hang out with True before I hang out with Sherry,” he says. “He greets me and then we throw toys a little bit. And then it’s, ‘Hey, Sherry, how’s it going?’ But first it’s True.”

“It is an icebreaker,” says Sherry Leedy. “When people come in, what do you talk about? You know, ‘How’s the weather?’ How can you initiate a conversation? And so when True’s here, it gives you that opportunity to talk about something that you have in common.

“I think the role he plays is that people who love him and come back to the gallery, they love the art, too, and so they end up with this or that or the other thing. But it’s more about creating an environment where people feel comfortable.”

Leedy has learned to only buy toys for True that she likes to see scattered on the gallery floor, “because, let’s face it, that’s where they are most of the time,” she says. “And so people will come in and at first not know if they’re looking at dog toys or art. They’ll walk around and are just unsure about it.”

When it comes to art, True is never less than decisive, Leedy says. “Very often, when we’re doing an installation, or even when the show’s set up, he’ll end up going over and sitting or lying down near a piece. And so we’ll take his photograph and put it on Instagram as his pick of the show.”

In the future, that might include bypassing humans and going directly after the dog market:

“My fantasy is a pet portrait show and you hang all the portraits low at pet level. And so everybody can bring their dog to the show and the dogs can make their selections. I think it would be a great fundraiser for Wayside Waifs.”