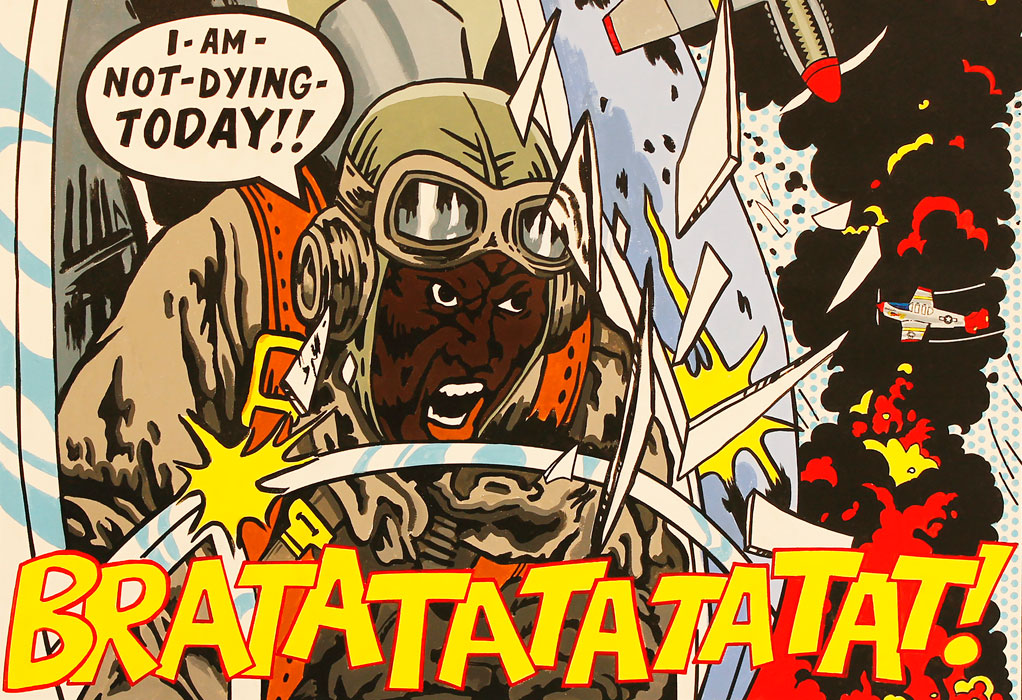 From Gun Violence to Discrimination, Artists Weight In

The centerpiece of Archie Scott Gobber’s summer one-person show at Haw Contemporary Crossroads generated a firestorm of interest and commentary on social media after “New York Magazine” senior art critic Jerry Saltz posted a picture of it with the comment, “Put one in front of every NFL Stadium.”

The artwork, a “Kneeling Flag” created in response to the NFL controversy over players kneeling during the national anthem, was retweeted 742 times and drew comments ranging from “brilliant” and “super brilliant” to “too literal” and “schlocky.” On Instagram, it was “liked” by nearly 9,000 people.

“I feel it’s the most important piece of art I have seen come out of the region for a long time,” said gallery owner Bill Haw. And “Kneeling Flag” will be staying in KC: The work was purchased by Kansas City super collector Bill Gautreaux.

With all the online exposure and a one-person show, Gobber’s “Kneeling Flag” is perhaps the most widely known piece amid the proliferation of issue art in Kansas City’s art galleries since the 2016 election.

Issue art is meant to drive conversation about topics Americans feel passionate about — from race, to guns, to immigration policy and presidential behavior.

Over the summer, Cerbera Gallery displayed a silkscreen on paper consisting of a simple typed quotation on a white page: “Grab them by the (p—y). You can do anything,” and the attribution, “The President of the United States.” The piece was created in 2016 in an edition of 250 by London-based artist Hayden Kays.

Guns have long been a burning issue for Kansas City artist Linda Lighton, whose summer exhibition at Weinberger Fine Art represented her response to what she calls “an explosion of over 357 million guns in this country.”

The exhibit featured a “Ring of Guns,” a “Pedestal of Guns,” two 8-foot-high towers of guns positioned to form an arch, and other gun-based works, all made of glazed clay.

“A profusion of guns has not made us safer, or more civil,” Lighton says in her artist statement. “It has not strengthened our institutions but is destroying them. In the U.S. we have 50 million more guns than every man, woman and baby! This should make us the safest country on earth! Yet we are one of the most violent countries in the world, and you might not know it.”

Images of guns also played a prominent role in Chapman, Kansas-based artist William Counter’s summer exhibit, “Red Square,” at the Leedy-Voulkos Art Center. Chapman, a 1999 alum of the Kansas City Art Institute, reimagines the covers of books, album covers and vintage magazines to comment on instances of “contradictions and coincidence” in our society.

News magazine covers inspired two of Counter’s large paintings on the topic of guns, and it is sobering to realize that the “Newsweek” emblazoned “A question of guns,” and the “Time” magazine cover, “The Gun in America,” that Counter reworked, were published on June 28, 1968.

By late August, issue-based artworks were cropping up everywhere. The Block Artspace Project Wall installed “Fence (Dreams Deferred),” a view of a garden through a chain-link fence, created by New York-based KCAI alum Paul Anthony Smith. An iconography of barriers and divisions has become a hallmark of our times. According to Artspace curator Raechell Smith, “Fences” offers “a rich metaphor for agents that divide, and a counter-point to the idea of “open spaces.”

In the Crossroads, Texas transplant Chico Sierra pulled no punches in his exhibit at the Fishtank Gallery, which included disparaging images of the president in the company of Russian leader Vladimir Putin and North Korean dictator Kim Jong Un.

“I started (these) a year ago in response to the escalation of Trump’s policies,” the artist said. Sierra made a protest poster out of his caricatural portrayal of the president as a clown, adding the words “Villainous Treasonous Clown” and hoisting it during the president’s visit to the VFW national convention in Kansas City last July.

The same convention inspired Kansas City artist Rusty Leffel to bring his sculpture of the Statue of Liberty in a cage to the afternoon demonstration at Barney Allis Plaza. The piece expresses his distress, Leffel said, “about the separation of families and children at the border and then the putting of people, especially children, into cages. It’s like our values as so long expressed through the Statue of Liberty have now also been caged . . .”

Following the demonstration, Leffel and his wife, Paula, placed the sculpture in the yard of their home on Tomahawk Drive.

A highlight of the fall “Welcome to the Neighborhood” exhibit at the Charlotte Street Foundation’s La Esquina Gallery was “Welcome to Brownbackistan,” a quilt by noted fabric artist Nedra Bonds exploring the political realities of life in Kansas under the former governor.

The Leedy-Voulkos Art Center kicked off the fall season with Sonié Joi Thompson-Ruffin’s blockbuster group show “Cultural Legacy: What’s Going On,” in which artists respond to the premise: “When we examine the current social, political and racial climate we have to ask ourselves, ‘Have things really changed?’”

Thompson-Ruffin herself addressed this question in her summer 2017 exhibit “Revolutionary Awakening” at KCAI Crossroads Gallery. In textile artworks and a searing statement, she issued a plea for change amid evidence of a country stuck or regressing on issues of social justice and environmental responsibility.

In the current exhibit at Leedy-Voulkos, three dozen artists and poets, including Thompson-Ruffin, Lighton, Bonds, Jim Leedy, Harold Smith, Robert Quackenbush, Glenn North and Sonia Sanchez, further explored the theme. Standouts include painter Michael Brantley’s “I AM,” a riveting depiction of a Black man haloed by an image of the AFSCME Memphis Sanitation Workers’ Strike of 1968.

“The overall theme of the painting is in the spirit of Sankofa, a Ghanaian symbol, made in the form of a bird looking over its shoulder,” Brantley said in a written statement. “(The bird is) transplanting a seed for securing a better future, from what had been retrieved from the past.”

Look closely and one can see slave ships reflected in the subject’s eyes. He’s “looking back on a time when the transatlantic slave trade was possible,” Brantley explained. “He is taking the chains of bondage and handing them back while declaring himself the man he was created to be before his capture and subsequent dehumanization.”

Black history inspired Keith Shepherd’s “Tuskegee Tribute,” commemorating the heroic exploits of the Tuskegee Airmen, but the painting asserts an eerie resonance with the events of today. Reflecting the artist’s admiration for the iconic Pop pieces of Roy Lichtenstein, the painting’s cartoony style includes a speech bubble. In our present era of police shootings, the airman’s utterance, “I-am-not-dying-today,” could be the mantra of every young Black man in America.

The turn to issues in Kansas City’s galleries occurs against a backdrop of notable national projects, including an American flag overprinted with black marks alluding to a divided nation, by German artist Josephine Meckseper. The piece is one of 16 works addressing current issues created for “The Pledges of Allegiance” series organized by the New York-based nonprofit, Creative Time.

Locally, the work was displayed outside the Mid-America Arts Alliance in the Crossroads Arts District. Over the summer, it was also displayed at the University of Kansas near The Commons at Spooner Hall, where it was ordered removed by Kansas Governor Jeff Colyer and Secretary of State Kris Kobach. In response, university officials moved the flag inside the Spencer Museum of Art, which, with the Commons, issued a statement in defense of freedom of expression and launched a series of programs to “explore the issues and responses raised by the artworks.”

“It was crucial for the Museum to create context around the object for continued dialogue,” said Spencer Museum of Art director Saralyn Reece Hardy. “College and university art museums have a continuing important role in facilitating conversations about freedom of expression.”

The museum’s handling of the matter earned praise from the “Chronicle for Higher Education” for “turn(ing) it into an educational moment, something that university museums are in a unique position to do.”

A stretch of local highway also was enlisted as a forum for discussion about civic issues, courtesy of the New York-based For Freedoms project and 21c Museum Hotels. In late August, Brooklyn-based artist Jeremy Dean installed two billboards along I-35 & Terrace E/S, one featuring an altered American flag and the other showing a re-envisioning of a Depression-era “Hoover Wagon” as a horse-drawn Hummer. In an almost uncanny counter to the Meckseper flag, Dean’s flag, accompanied by the word “indivisible,” comprises two overlapping flags, such that the blue field of stars appears in the center. The Dean billboards, which were up for a month, are part of a series of 10 billboards commissioned by 21c Museum Hotels and installed across the country in collaboration with For Freedoms.

The November/December 2016 issue of “KC Studio” featured Artist Pages reflecting the issues dominating the presidential election. As seen through the eyes of many artists, clearly, not much has changed and some areas of concern have taken a turn for the worse as we approach the mid-terms.