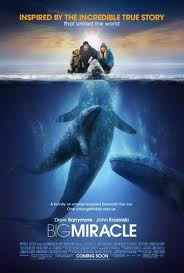 I take back all those terrible things I said about mass media and how it only focuses on the bad news of humanity. With all the wars, economic depression, deaths, and overall nastiness it is hard to think that the national nightly news does anything but report the bad and leaves the soft reporting to the local stations. Until a film like “Big Miracle” comes along and reminds us of the good in the world and how the national nightly news can help make a difference for the better.

The story of “Big Miracle” is based on true events in 1988 when three California Gray whales (a mom, a dad, and a son) become trapped under ice in Alaska.  They are five miles from where they need to be in the Arctic Ocean.  As you may know, whales are mammals and that means they need to breathe air.  Which also means that they cannot hold their breath for five miles while they try to make their way back to the ocean. Luckily, they found a break in the ice where they come up for air.  Local new reporter Adam Carlson (played by John Krasinski) discovers the trapped whales.  It soon becomes national news thanks to Tom Brokaw. Really.

This film couldn’t just be a retelling of three whales trapped under ice. We also see a lot of political agendas come to surface.  Big oil driller J.W. McGraw (played by Ted Danson) has just won the rights to drill for oil in Alaska therefore prompting action from his rival at Greenpeace, Rachel Kramer (played by Drew Barrymore), who happens to be Adam’s ex-girlfriend too.  Rachel is an extreme activist willing to go to any length to save these whales, including scuba diving in the ice-cold waters. It was a great idea to cast Barrymore in this role since the “let’s save mother earth” persona is what she seems to live every day as a person. 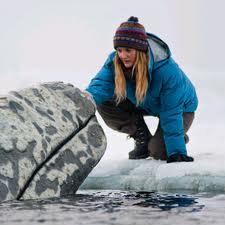 We also are subject to actual new footage from 1988 giving this story a realistic feel and keeping us grounded in the time frame. With more and more media coming on board this event grows from a soft story to a headline for the whole world to see.

While Greenpeace and Big Oil are duking it out, J.W. sees this as a public relations opportunity and calls up the National Guard to pull in a hover boat icebreaker to save the whales. What he gets is a Rambo wannabe, Colonel Scott Boyer (played by Dermot Mulroney) to pilot the mission.

So far, we have the media, the natives of Barrow, Alaska, Greenpeace, Big Oil, The White House, two ice-melter inventors from Minnesota and the National Guard all pulling together to save Fred, Wilma, and Bamm-Bamm (the given names of the whales). Who is missing from this team effort? Well it is 1988, why don’t we call in the Ruskies to help save the day? It makes sense when you see it all come together.

Once everyone puts their own agendas aside, the audience is free to see what teamwork looks like for a moment in human history. It was no longer about ratings or a PR stunt or making money. It was all about those three whales and what a little humanity can do to save them.

Should you see this movie?  Yes.  It’s a fun family film that does pander to mom and dad’s nostalgic side bringing back memories of growing up in the 1980s.  Look closely at the props and backgrounds and notice the director Ken Kwapis’ attention to detail.

We also see a tale of how important these whales are to the natives of Alaska and how everything from oil drilling, to whales, to cultural heritage and even the nightly news are connected in one way or another.