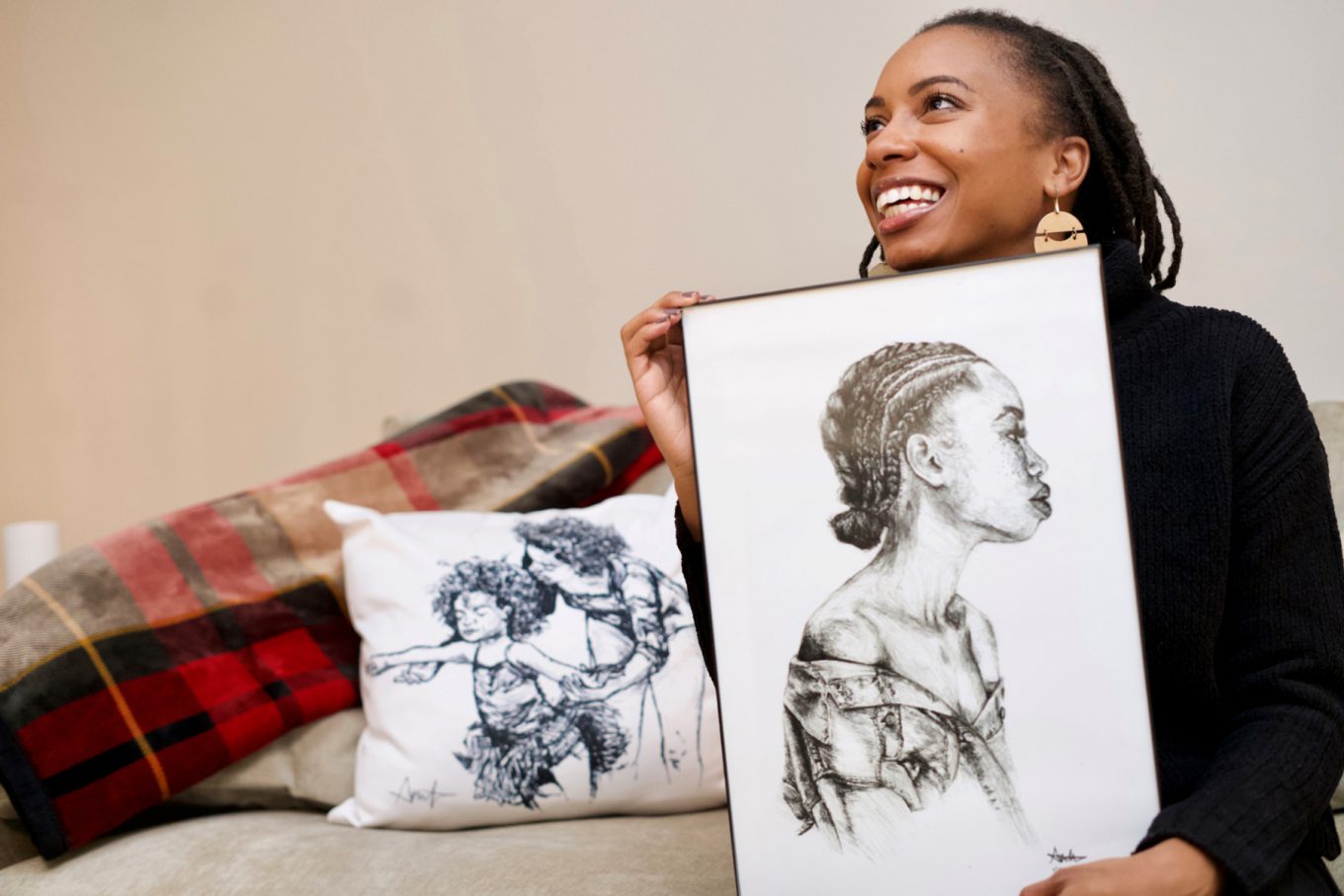 Kansas City artist Anita Easterwood with her artwork, “Daydream,” for sale on BLKMKT. (from the artist / photo by Muenfua Lewis)

The Platform Launched in 2020 Now Has 300 Artists in its Marketplace, Including Several from Kansas City

Innovation most often arises from solving problems. Tatiana Rice, a Wisconsin native, had spent two summers in Kansas City doing internships while in law school at Washington University in St. Louis. It led to a plum position in Washington, D.C. As a woman of color and young professional, she wanted to start collecting the work of Black artists. Where to begin?

“After the murder of George Floyd I felt I wasn’t doing enough for the Black community,” explained Rice. That tragic event increased the number of people who wanted to support Black culture and Black artists in a more intentional way. Rice didn’t grow up in an art collecting family and didn’t have a background in the arts. She looked initially to the internet. “I found a lot of trauma-related work, but knew there was so much more to the Black experience. “What was the problem?”

BlkArthouse (is) a platform for connecting collectors with Black art while promoting and supporting artists through sales, exhibitions, and professional development.

Rice initiated an earnest process of self-education and networking. She started talking to artists about their work on Instagram and was surprised how accessible and forthcoming they were about their practices and ideas. Contrast her experience visiting traditional galleries only to receive the cold shoulder of the inequitable “art world.” There had to be a better way than being ignored by gallery gatekeepers who ordain art stars while managing a line of eager collector/speculators like an intimidating bouncer working the velvet ropes outside a tony night club. Problem identified.

Undeterred, Rice connected with artists, curators and galleries that shared her interests in places like Kansas City, Philadelphia, Dallas, Los Angeles, even Brazil. She immersed herself in different artistic styles and listened closely to the needs and challenges facing Black artists. She got an earful and the wheels were turning. In 2020, with a core collective of six Black artists, Rice launched BlkArthouse as a platform for connecting collectors with Black art while promoting and supporting artists through sales, exhibitions and professional development.

Now with almost 300 artists in the BlkArthouse community, the platform has presented numerous educational seminars on a range of artist specific topics: creating a portfolio, how to sell online, copyright and contracts, social media marketing and NFT art. About half of the artists in the community now have seller profiles on their dedicated online marketplace called BLKMKT, where they can set their own prices for original works, prints and photography. With their primary mission of creating affordable access to Black art, buyers can find work priced for less than $100 up to tens of thousands of dollars.

While portraiture and figurative paintings predominate, other artistic styles are well represented on BLKMKT including expressionism, surrealism, street art and abstraction. Kansas City’s Harold Smith is currently featured prominently on the marketplace with more than 20 works available from his powerfully expressive “Man of Color” series.

Smith’s in-your-face faces are of “regular, hard-working, simple, Black men” whom, he points out, are largely ignored and invisible in America. Smith’s fearless use of color and deft handling of impasto make for empathetic, tortured portraits. His rendering of eyes is particularly engaging. Smith’s men of color gaze back at the viewer with palpable intensity — though unseen, they still see. Other KC artists on the site include Anita Easterwood and E. Lewis.

Yet another Kansas City connection to the social enterprise was inviting local collector Dwight Smith onto the BlkArthouse advisory board alongside fellow collectors, curators and entrepreneurs committed “to creating a sustainable economy around Black art.” Smith has been an active and passionate collector of work by women and people of color. Rice considers him a mentor.

Though launched in the midst of the pandemic, BlkArthouse planned to periodically curate month-long exhibitions of its artists beginning with an online exhibition of its core collective entitled “Coming Home.” The show completely sold out, proving that their collective model, grounded in collaboration, care and connection, could successfully bypass the endemic social and economic exclusivity of the traditional gallery system.

In the summer of 2021, they partnered with the forward-thinking hotel and workshop, The Eaton, in Washington, D.C., for their first in-person exhibition, “What is Black Art,” featuring 19 artists. Notably, they presented a national and international spectrum of Black artists demonstrating the global breadth and depth of the Black experience. That show, too, saw healthy sales directly benefitting the artists.

“There is tremendous interest in a variety of Black perspectives. Racial justice and equity are just as important in the arts, and people want to support that.”

Most recently BlkArthouse invited 10 artists to exhibit in “The Essence of a Black Woman” at Baltimore’s arts hub, called Motor House. The aim of the exhibition was to “present the rich complexity of the Black female narrative and experience — one that is often underrepresented and misrepresented in mainstream culture,” according to their curatorial statement. Tatiana Rice revealed that plans are also in the works to present an exhibition somewhere in the Midwest, possibly in 2022.

“I’m surprised by how well it’s been working,” admitted Rice. “There is tremendous interest in a variety of Black perspectives. Racial justice and equity are just as important in the arts, and people want to support that. Millennials are starting to have more money. I want to help them learn how to collect Black art to support that change.” Problem solved.

For more information, www.blkarthouse.com. To view works for purchase, https://blkartmkt.com.