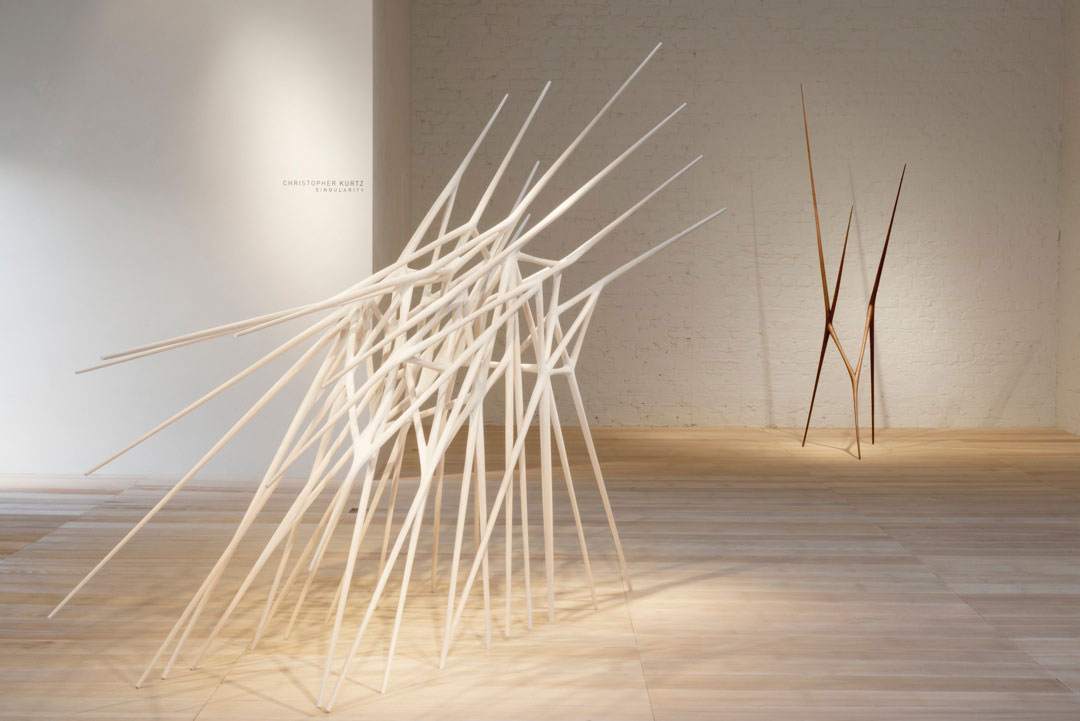 The art world has seldom been comfortable acknowledging makers who function both as designers and as artists. As Andy Warhol discovered, no matter how successful he was as a New York illustrator, he was snubbed by other artists until he focused exclusively on “fine art.” Leonardo da Vinci famously turned his nose up at Michelangelo because the latter sculpted and designed architecture as well as painted, and in the process got his hands dirty.

A young generation of artists is now seriously upending the old design versus art prejudices, and this group is quite comfortable working with all kinds of materials and making objects both utilitarian and non-utilitarian.

Christopher Kurtz is one of those artists. Born in 1975 in Excelsior Springs, Missouri, Kurtz attended the Kansas City Art Institute, where his father, Carl Kurtz, was a professor of fine arts. He then went to Harvard before receiving a degree in sculpture from Alfred University. His principal medium is wood.

Ten years in the making at his studio in New York’s Hudson Valley, Kurtz’s exhibit at Belger Crane Yard consists of almost 20 hand-carved wooden chairs and sculptures. The earliest piece, which is the touchstone for the entire exhibit, is a reproduction of a 19th-century Birdcage Windsor chair that Kurtz made in 2003. It was a commissioned piece, but in the process of fabricating it Kurtz discovered that it contained “an encyclopedia of information.” Making it, he writes in his artist statement, involved “complex woodworking techniques from carving, to steam bending, lathe turning, to structural building, engineering and ergonomics.”

This kind of slow, deep involvement in materials showed Kurtz “the potential to generate endless forms.”

(A)Typical Windsor Form, a steam-bent double Windsor chair from 2004, exemplifies the playfulness and experimental riff of the artworks that followed.

Several works from 2009 offer variations on an armchair, bar stool and counter stool. All are exquisitely carved from walnut in shades ranging from black to pale beige. A wooden stool with pole-like legs from 2013 is made from ebonized redwood, walnut and brass. Besides the subtle interplay of color and materials, the seat of the chair is so delicately fabricated that its edges curve and resemble a padded cushion.

All the above works possess a subtle sensuality, and Kurtz expands on this element in sculptures such as Act Together, with its loops and curves, and Broken Ovals, with its thin, arabesque extensions of basswood. Barred Spiral, made from hand-carved maple, cedar and milk paint, combines six spear-shaped poles with a horizontal spiral encasing all the forms.

These pieces, made from bent laminated wood and covered with milk paint, recall some of the sinuous shapes of Elie Nadelman’s woodcarvings from the early 20th century. Nadelman was another artist who loved traditional crafts and folk art.

Janus, a red cedar and mahogany pedestal with bust, hints at the elegant, early abstracted works of Constantin Brancusi, an artist who wove in rudiments of folk art and design into his influential oeuvre over 100 years ago.

Three of Kurtz’s most recent sculptures – the wall work Untitled (Many Stars) of ebonized pear wood, the free-standing Untitled (allonge) from bronze, and the large basswood piece Singularity—are all composed of thin strips of wood or metal that resemble large thorns. These sculptures meld the seductiveness of hand-worked, beautiful materials with a sense of possible impalement, and give the term “look but don’t touch” added meaning. And to think it all started with the innocuous fundamentals of a Windsor chair.