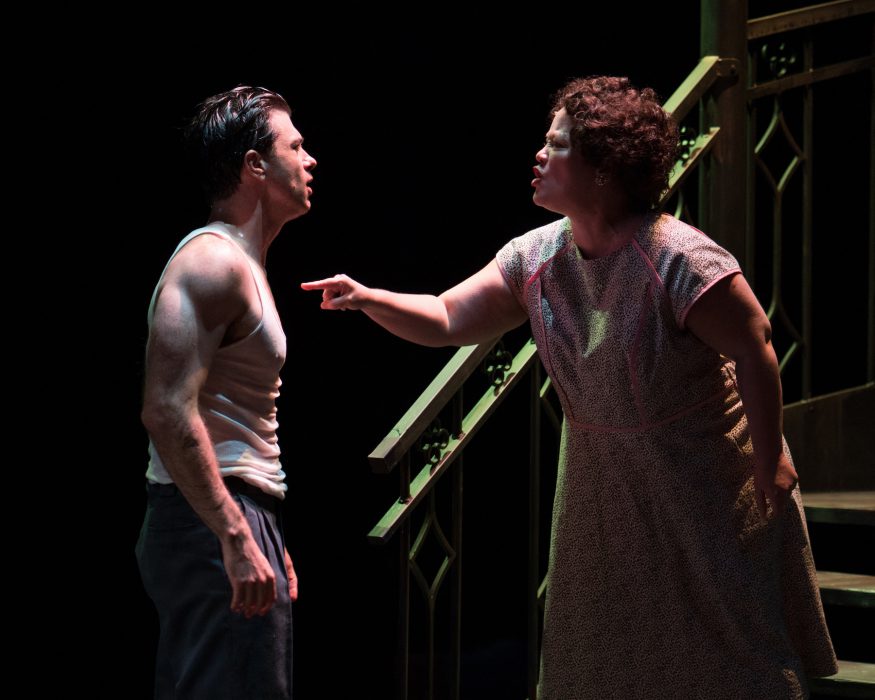 Blanche DuBois, caught in a time loop, remains forever a moth drawn to the open flame of Stanley Kowalski.

Indeed, “The Moth” was a working title of Tennessee Williams’ 1947 masterpiece A Streetcar Named Desire, which some critics consider his artistic peak. The hot-house drama invites valid criticism, but like a number of other American plays from the mid-20th century, this one takes on a life of its own in performance. All you need are committed actors.

When Kansas City Actors Theatre announced that Cinnamon Schultz would play the doomed Blanche, I was skeptical. Schultz is a solid, sometimes exceptional, actress. Even so, I couldn’t picture her as the febrile Blanche. But on opening night, Schultz, working with director Sidonie Garrett, blew away any apprehensions about her suitability for the role. In one of the most difficult parts in American theater, Schultz’s performance is brilliant — and that’s not a word I toss around. She negotiates Blanche’s fluctuations between raw honesty and artifice, and ultimate descent into madness, with precision.

Stanley is played by Tommy Gorrebeeck, an actor I’ve seen once before. He matches Schultz step-by-step as he tackles the iconic role with unforced authority. Stanley is brutal but he’s not dumb. In the course of the play he proves himself to be as deftly manipulative as any Southern belle.

Streetcar is a pre-feminist play written long before domestic violence became the issue it is now. Tennessee Williams connects sex to violence repeatedly, and he depicts sex as a force so powerful that it can render class distinctions meaningless.

Set in small two-room apartment in New Orleans, the show is a clash of cultures as Blanche, a faded magnolia with a tenuous hold on reality, arrives to spend the summer with her younger sister Stella, Stanley’s pregnant wife.

Blanche is broke. After enduring the deaths of relatives and overseeing the dismantlement of Belle Reve, the family’s ancestral plantation in Mississippi, she experiences the loss as a tragedy. Stella, on the other hand, sees Belle Reve the past she left behind. For Stanley, Belle Reve is a missed commercial opportunity.

Part of the longstanding appeal of this play is its evocation of the colorful, communal life in the French Quarter before air-conditioning sealed us off from our neighbors. Everyone knew everyone else’s business — for better or worse — and the way to beat the heat was a case of Jax beer with friends or a long soak in the tub. This is a textured little world, and it allows Williams to seamlessly integrate symbolism into a compelling narrative.

Blanche is the romantic South crushed by the postwar, industrialized, multi-ethnic working class represented by Stanley. But in Blanche we see something else — the belief that art and music can lift humanity to a level that transcends its brutish origins. In that regard, Blanche represents all artists and poets and is likely a stand-in for Williams himself.

Stanley’s old Army buddy Mitch, a socially awkward co-worker who lives with his ailing mother, is played by Matt Rapport with integrity. For Mitch, Blanche is the illusion of love and his last chance to find a life companion. For Blanche, Mitch is the way out of her desperate circumstances. Mitch is less a full character than a construct, and there’s something implausible in their relationship, despite the admirable efforts of Rapport and Schultz.

As Stella, Bree Elrod is miscast. Tall and thin and topped off with a blonde wig with frayed side flips, she seems to have wandered in from another play. A crucial element in Streetcar is the palpable lust between Stella and Stanley. It’s the glue that holds them together, but in this production that sexual chemistry is missing.

A Streetcar Named Desire is a great American play. And any production that gives us a superb Blanche and a charismatic Stanley can be forgiven its missteps. This one does. Schultz is not to be missed.