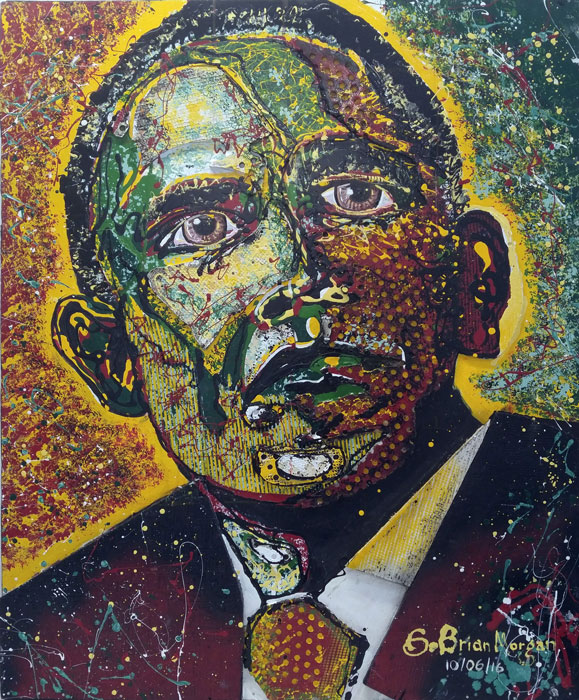 Now on view at Westport Presbyterian Church, “The Collected Works of S. Brian Morgan” catalogues a decade’s worth of artistic production in the forms of assemblage masks, magazine collages and paintings, based on the theme of navigating personal and group identity in black America. Dozens of works hang on the walls of the nave and narthex, behind the pews; many have special significance the church’s recent history.

A series of assemblage masks, created out of broken ceramics, children’s building blocks, beads, furniture and other found objects create a multicultural collection of humorous and critical visages.

“Wild One” is a circular face constructed out of yellow, green and red children’s building blocks, with long hair made of untwisted ropes hanging over its eyes like thick dreadlocks. Hanging on the other side of the entry to the narthex, “Wise One” is similarly colored red, green and yellow, the traditional colors associated with Pan-Africanism, but this face is formed out of door knobs and furniture parts, while the surface has been sanded down and weathered. As a pair, they complement each other, one representing the wildness of youth, the other the wide-eyed awareness and wisdom of age.

Inside the narthex there are more masks and paintings. “Bull in a China Shop” is a mosaic mask constructed out of blue and white china, but with huge white orb eyes and large clenched white teeth, not unlike the jade mosaic skull masks made in Pre-Columbian Mexico. “Mr Freeze” is a silly looking face formed out of the parts of an old snow-cone machine.

The most politically charged mask is “Rememberbilia,” a large wooden disc painted black with a small red circular mouth and bulbous nose. The eyes are made from white beads on the ends of nails and even more nails are pounded into the top of the head to represent hair. The mask is unmistakably reminiscent of the racist blackface toys and minstrel shows of the 19th and early 20th centuries. Morgan, himself an African-American, used to collect this memorabilia, but later sold it all to begin collecting contemporary African-American art. Still, he feels the need to remember these objects and not let their painful history be forgotten.

Back outside the narthex, on the back wall of the nave, there are two other politically charged works relating to black identity. “Obama,” an homage to Shepard Fairey’s now famous “Hope” campaign poster, is a rough replication of the original, created with cut- out pieces of masonite and splatter painting, with two important differences from Fairey’s original. In this version, the red, white and blue colors are replaced with the red, yellow and green of Pan-Africanism, and the word “Hope” is removed from the bottom of the painting. The portrait is a challenge to the unresolved legacy of Obama and questions who really ‘owns’ that legacy.

Across from “Obama” is a portrait of Martin Luther King Jr. painted on a strange faux-brick wall from one of the many artificial facades that were put up as stage props in the 18th and Vine District Jazz District. Titled “Let My People Go,” it is one of the few artworks that survived the 2011 fire that destroyed Westport Presbyterian. The artwork, now slightly scorched and burned, is a reminder for the congregation of how fragile the world truly is, but also a symbol of hope in the face of violence and destruction, whether it be accidental or political.

But in all this cultural and racial anthropology, there is one work that is particularly personal for Morgan. “You Can Call Me Kimberly” is a large acrylic painting of Morgan’s 17-year-old daughter. She sits in an outrageous leopard print arm chair, one leg nonchalantly hanging over the arm of the chair. In her hands she holds a copy of the children’s book “Charlotte’s Web,” while her t-shirt reads “A Little Dirty” in bold letters, a stark contrast of child-like innocence and adult desire.

Morgan’s “Collected Works” doesn’t offer a solution or reconciliation to the so-called ‘problem of race’, rather it interrogates it honestly. The use of masks as an art form is about more than just African heritage and that continent’s cultural legacy of masquerade, it’s about how we embody unfixed identities and legacies and how we can change who we are from one moment to the next. It’s the same shifting that occurs between Kimberly’s sexually suggestive t-shirt and the children’s book in her hands. We aren’t just one fixed identity, we are a set of masks.