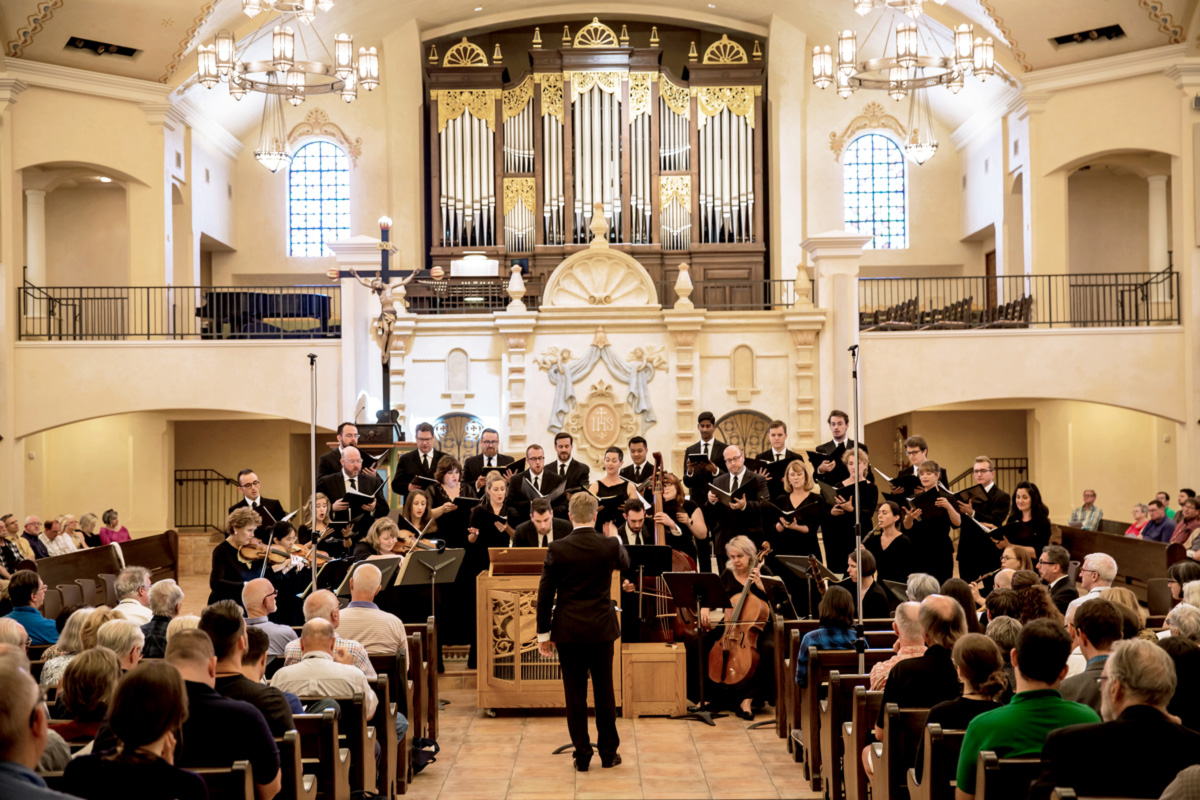 For many groups, just getting back on stage with an audience is celebration enough, but for Spire Chamber Ensemble and Baroque Orchestra, planning their first return-to-the-stage concert after 623 days apart was an opportunity to reflect on the year we had and contemplate the future we want to build.

“We thought one of the best themes that we can talk about right now is the love that we share between humanity,” said Spalding. “It may be easy to think we are at our best when we divide into separate camps or factions, but history has proved that we’ve made the most strides and improvements as a people when we do things together.”

For this performance, the organization conceived a thoughtful, exuberant and creative program, pairing Reena Esmail’s 2016 “This Love Between Us: Prayers for Unity” with Johann Sebastian Bach’s Magnificat, from 1723.

This program, hosted by Country Club Christian Church Nov. 20, also includes extra-musical events, with a conversation ahead of the concert over Zoom, a pre-concert lecture about the work, and post-performance forums. (Check the Spire website, www.spirechamberensemble.org, for more information.)

These events, Spalding said, open and support a dialogue “about how we are more alike than we are different.” There will also be opportunities to interact with a partnership of social justice and interfaith agencies after the concert.

Spalding hopes this performance acts as a catalyst for positive change, a bridge to bring people together. “It’s probably the most holistic concert we have ever done, from start to finish, helping people through the journey,” he said.

“Our goal is not to convert or lecture, but choral music has the power, especially since we have text, to open people’s minds and hearts to different perspectives they may not have considered before. Our music should ask the question: Would you consider this person’s story?”

For “This Love Between Us,” Esmail examined the seven major religions of India — Buddhism, Sikhism, Christianity, Zoroastrianism, Hinduism, Jainism and Islam — and distilled each doctrine to its main tenet. She discovered that they weren’t so different after all, prioritizing unity and empathy.

To create this seven-movement work, she set each religion’s teachings (or the word of a poet writing through that influence) in its primary language, paired with the English translation.

For this performance, the soloists are members of the ensemble, trained in Western vocal styles, and Esmail coached them on the particular style and proper pronunciation of the various phrases. Esmail, who grew up in Los Angeles speaking her family’s language — Gujarati — with an American accent, learned how to teach Western ears and tongues to understand the specific nuances of each language. (There are 121 official languages in India, with 22 recognized in their constitution and an estimated 19,500 dialects or mother tongues.)

Esmail modeled the instrumentation for her piece after the instruments and voices used by Bach, but she added sitar and tabla, two of India’s most iconic instruments. Interestingly, all these instruments could nearly be considered contemporaries, as they all developed during the 17th and 18th centuries into what we recognize today, albeit 4,000 miles apart.

The combination of languages, tonalities and instrumental colors, together with the intricately woven texts, is a “really rich harmonic language,” said Spalding, “to create this hybrid, united world in music.”

In Esmail’s description of the piece, she discussed how these different worlds connect. “Each of the musicians is asked to keep one hand firmly rooted in their own tradition and training, while reaching the other hand outward to greet another musical culture.”

Learning how to connect cultures is a part of both Esmail’s art making and her personal journey. Born in Chicago to first-generation immigrants, she grew up in Los Angeles, where she learned Western classical music. But as a graduate student, she immersed herself in Hindustani music traditions, and learned how to combine these styles in a way that remained faithful to each.

She wrote this piece in 2016 while at Yale University, as the heat of the presidential election highlighted the deep divide in our country and world. “It sometimes scares me how increasingly relevant this piece seems to be,” said Esmail.

“While it scares me to see those divides getting larger and larger, I also still believe that we each have the capacity for incredible empathy, and that so many of our different spiritual practices can and do support that empathy,” she said. “Being good to one another is an important principle in every religion.”

“If you could boil down each religion to its major point,” said Spalding, “it all comes down to the Golden Rule. What does it mean to love and respect each other?”

“We thought there is no piece that is more fitting and perfect for our times, as we are thinking about the losses of the pandemic, of natural disasters, or political discord,” he said.

The Magnificat, too, has elements of social justice, said Spalding. Bach used the Latin text from the Gospel of Luke, the words describing how the lowly are lifted up and the hungry fed, the arrogant brought down and the rich made empty . . . highly suggestive text in a world controlled by the church and a strict class system.

It was also musically innovative for its time. Instead of a long, ponderous work, young Bach (for his first composition as the music director in Leipzig), wrote a bright, brilliant, joyous work, and required one of the largest orchestras seen at that time. The work has remained a favorite for hundreds of years.

This concert is free, part of Country Club Christian Church’s 100th anniversary, though reservations are required, as capacity is limited. The concert is a gift to the community from the church and the ensemble.

“Spire wants to use the unique power of choral music to unite,” said Spalding, “finding harmony in a world which is more divided than it has been for a long time.”

Spire Chamber Ensemble and Baroque Orchestra presents “This Love Between Us” at 7:30 p.m. Nov. 20 at Country Club Christian Church. Reservations and face covering required for this free event. For more information, www.spirechamberensemble.org.