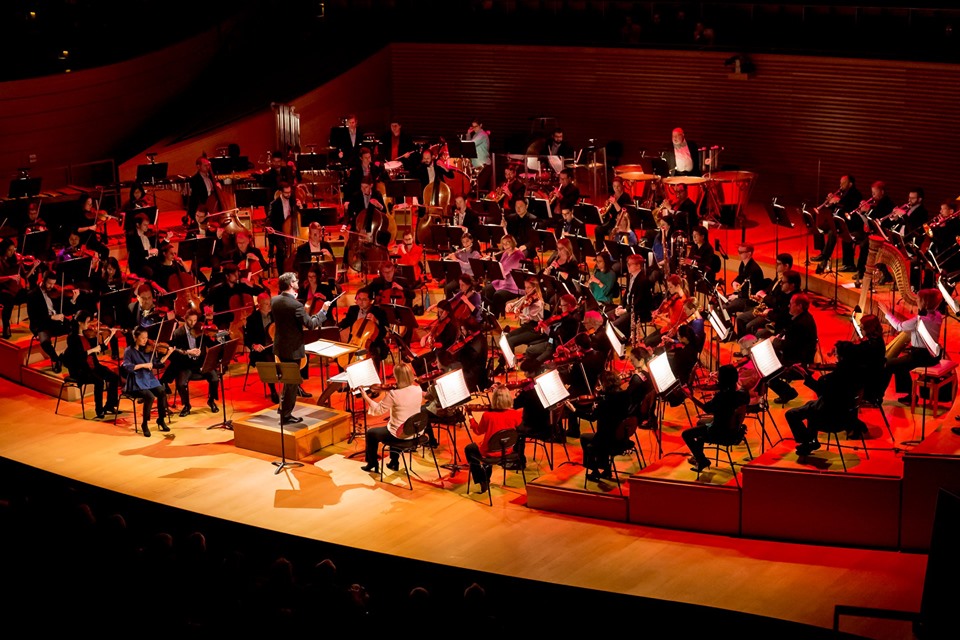 Though “Secrets Revealed” was the theme for the final Classics Uncorked concert for the Kansas City Symphony this season, the idea of unlocking the mysteries of orchestral music is something of a consistent mission for this particular series and something that the orchestra and associate conductor Jason Seber are particularly skilled at achieving.

The format is approachable. The concerts in Helzberg Hall are enjoyable and well played. Programs are inventive, flexible, and broad, looking beyond traditional classical fare. Performances are informative; they are lively. A tad earlier in the evening, considerably shorter than a standard concert, a bit more casual, too, but if you want to get gussied up and impress a date, that works.

For this Thursday evening concert, Seber selected two works by English composers: Anna Clyne’s “Masquerade” and Edward Elgar’s “Enigma Variations” (formally known by the less intriguing title Variations on an Original Theme, op. 36.).  Both pieces conceal something in their construction, and leave some questions unanswered.

As I pondered this concert, I also contemplated the role of champion: how history has lifted up some composers, dismissed others; how every musician and listener and commentator (especially in our social media age) has the ability to advocate and promote the voices important to them; and how, whether conscious or subliminal, we determine which of those voices will carry into the following generations.

Beginning with a flash and a flourish, “Masquerade” (2013) is a short, nonstop capricious kaleidoscope of colors with a bit of a Charles Ives wink, as though we were sent spinning in a lopsided carnival whirligig. Amidst endless cascades of notes, snippets careen from garish and grand as themes lock into clarity for a moment before being whipped out of shape.

“Wasn’t that fun?!” said Seber afterwards, who described Clyne as one of his favorite composers and touted her as “important to England’s history.” The orchestra also played her “Within Her Arms” last week on the Classical Series with Michael Stern and there’s a piece scheduled for next season, too, making Clyne, in sheer frequency alone, the current most popular living composer in the ensemble’s repertoire.

Throughout this season’s series, Seber included works by women on each program, helping address the imbalance in traditional symphonic repertoire. There is considerable debate happening within the field of classical music about why and how best to right the imbalance, but I advocate that getting the music in front of people is the first best step, and in this regard the Kansas City Symphony has made a notable attempt, which I hope will continue and grow.

Elgar’s Variations is arguably his best-known work and (notwithstanding “Pomp and Circumstance”) his most often performed. (KCSymphony has also recorded the work on their 2012 album.)

Along with being charming and exceedingly listenable, Elgar embedded a hidden code, a mystery theme that we still haven’t figured out completely, though most Elgar lovers have a favorite theory.

We do know the names and personalities that inspired each variation and Seber presented a dynamic description of these immortalized muses, with the orchestra demonstrating the associated excerpts. These remarks, which included a slideshow, appeal to rookies and veteran audience members alike, full of personality, humor and insider tidbits.

Acting associate principal percussionist Daniel Morris demonstrated the nifty trick of using coins for a timpani roll, emulating the sound of a boat’s motor in Variation XIII. Perhaps not his most challenging moment of the season, but throughout the year he has contributed excellently to the ensemble, especially taking on the responsibilities of principal mid-season and performing with high-level consistency.

Elgar’s work has remained popular since its premiere in 1899, especially Variation IX: “Nimrod.” With its serene nobility, it became culturally significant as imbued with the grief and relief that accompanied the end of World War I, and continues as an integral part of London’s Remembrance Sunday events each November.

We had beautiful moments from viola and cello, some fine subtle coloring from clarinet, especially, and glorious brass. Elgar reserved the finale, the biggest and grandest variation, for himself and the orchestra gave it a ringing, vibrant performance.

At the end of the concert, there remained an unanswerable question: what is fad and what is immortal? There’s no formula, no trick to what will capture the essence and imagination of a moment, but Kansas City Symphony made a persuasive case for timelessness in this performance.