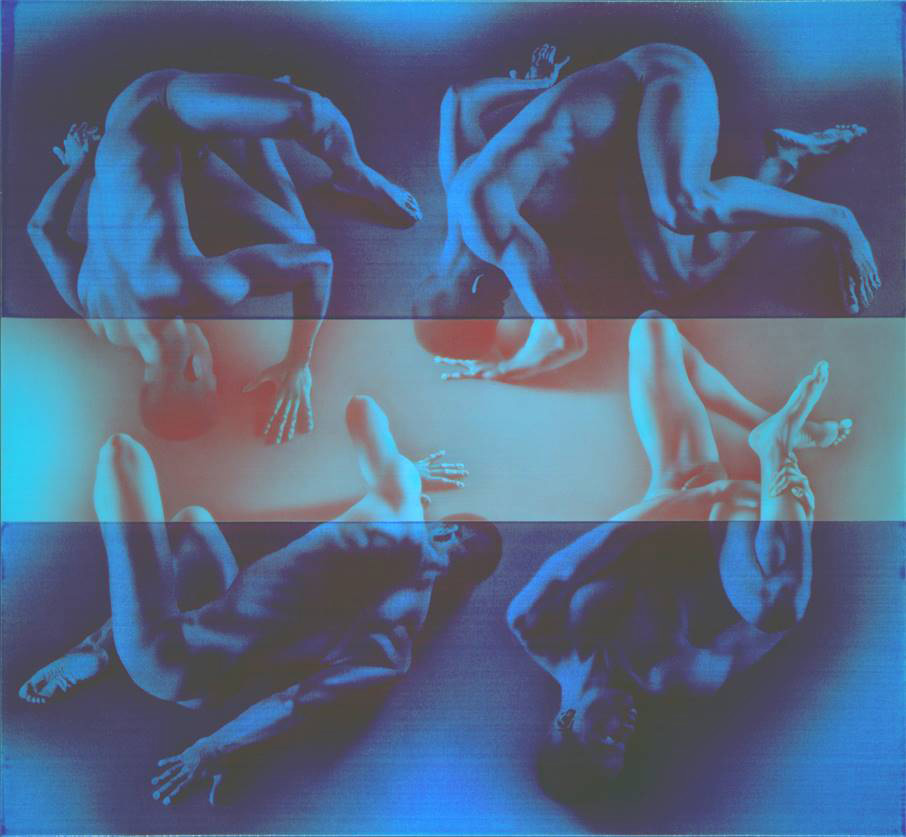 Jim Sajovic created his “Dark Paintings,” eight of which now hang like specters in the closed Leedy-Voulkos Art Center, from 1991-95. They were the artist’s demonstrative response to images of horrendous oil fires in Kuwait during the gulf wars, and to civil wars in South Africa and elsewhere.

Pain and disaster fill the various picture planes, but their implication is ambiguous. “What Fresh Hell is This?” would be an equally apt title for this series, the perfect works for our present time. Like the best political art, Sajovic’s “Dark Paintings” have gained in resonance a generation later, their significance amenable to whatever our contemporary, overwhelmed psyches care to ascribe to them.

All the works comprise three large panels (however, only one panel of “Gates of Dis” appears in the show as the other two were too large to display). Sajovic mined a variety of visual sources for these pieces, distillations of which are juggled throughout the series. Included are images of a nude man in various contorted positions, fragments from Sandro Botticelli’s 15th-century illustrations of Dante’s “Divine Comedy,” snippets from photographer Eadweard Muybridge’s series of a trapeze artist, and infrared heat scans of body parts and a speed skater.

These days, Sajovic is best known for paintings that are digitally sourced and manipulated. The “Dark Paintings” are visual precursors of his customary combinations of those techniques. While segments of these paintings resemble digitized photos, every inch in every work is hand-painted, which adds to their sustaining presence.

The overall sense of foreboding in the series is underscored by Sajovic’s deliberately intense, smoldering color schemes. In a recent interview, Sajovic said that “making the ‘Dark Paintings’ was a new adventure for me. I wanted just a few hues, a limited palette, so viewers could see the works ‘through a glass darkly.’”

He chose iridescent and interference paints in deep shades of cadmium, magenta, yellow and cobalt blue, whose compressed, shimmering juxtapositions enhance the sensation of being trapped in dank, heat-soaked environs. The small, chamber-like gallery in which the paintings are installed contributes to a feeling of claustrophobia. A visit from the Lord of the Underworld would not be a surprise here.

Most of Sajovic’s art before the “Dark Paintings” focused on the female body. For this series he wanted a “generic human form,” so he took multiple photographs of a nude African American model posed in a variety of postures on the floor. “I wanted to show the dark, anxious insides of human beings,” Sajovic said. X-ray images of hands and heads scattered among the works add to that effect.

Sajovic owns the photographs of Muybridge’s trapeze artist that he reproduces here. This series by the 19th-century, eccentric motion-study photographer hangs in the front hallway of the artist’s home. Sajovic chose specific images to copy because of the subject’s distorted body postures, which bring to mind scenes of torture.

Of particular interest are five paintings — “The Kiss,” “Baptism,” “Sleeping in Cocytus,” “Sisyphus’ Dream” and “Dante in Sarajevo,” — in which Sajovic incorporates choice imagery from Sandro Botticelli’s 1485-95 illustrations of Dante Alighieri’s narrative poem “Divine Comedy.” Written in the 14th century, the “Divine Comedy,” with its 100 cantos describing the three realms of the dead, is considered the greatest single example of European medieval literature. Still, Botticelli was criticized by Vasari, among others, for creating book illustrations in lieu of the major paintings for which he was renowned. Botticelli was obsessed with these drawings, which he never fully completed. (He made works for the Inferno and Purgatorio cantos, but none for the more uplifting Paradiso poems.)

Dante wrote the “Divine Comedy” while in exile from Florence, and Botticelli captured in exquisite detail the rage and condemnation that flood through segments of those cantos. Botticelli created the majority of his drawings using a metal stylus; Sajovic enlarged Botticelli’s images and used wooden ceramic tools to recreate them, scratching through layers of colored paint, sgraffito style. In “Baptism,” naked sinners are tossed head-first into baptismal fonts of fire, while sword-wielding demons abound in “Dante in Sarajevo.”

Sajovic calls the speed skater who pops in and out of the “Dark Paintings” a “cyber spirit; a nod to technology and also the soul.” The skater is also a time traveler, moving swiftly through multiple centuries yet ending up right where he started.

“Dark Paintings Redux” by Jim Sajovic opened March 6 at the Leedy-Voulkos Art Center, 2012 Baltimore, which is closed until further notice due to the COVID-19 threat. In lieu of a visit, please see our slideshow of all eight paintings in the exhibit above. For more information, 816.474.1919 or www.leedy-voulkos.com.